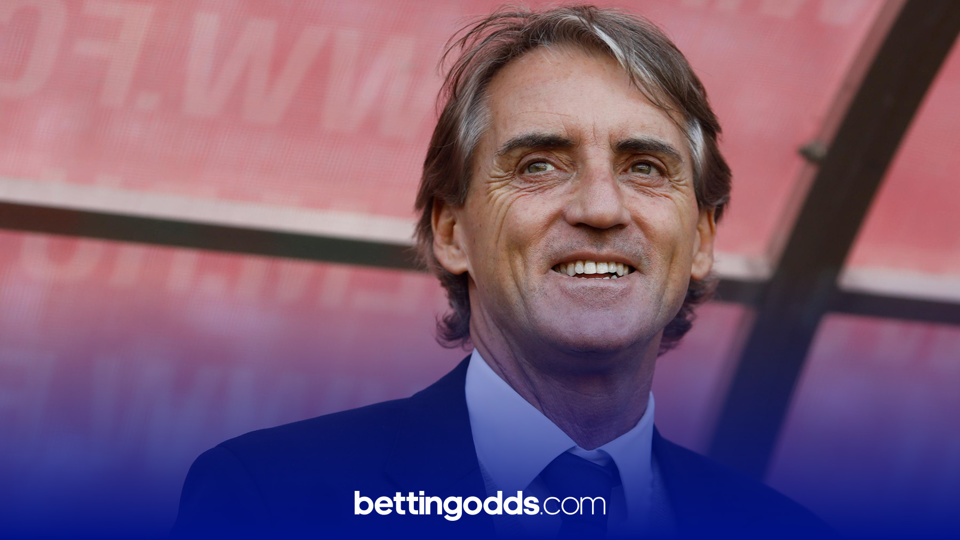 The last time Italy were beaten was in September 2018 and Roberto Mancini's side feature in our accumulator tips for Wednesday evening
By Anthony Eadson
13:08 Tuesday 13th October 2020 - 4 minute read

Wednesday sees the final fixtures of the International break with a whopping 20 game slate in the UEFA Nations League. England are in action against Denmark at Wembley which can be viewed live at 19:45 on Sky Sports main event. The other home nations can be seen on a range of Sky Sports channels with the remaining Internationals being shown via the red button.

I’ve gone through Wednesday’s matches and have picked out four selections I like the look of. As an accumulator they pay around 5/1 with most bookmakers, however the good folk at Paddy Power have given this a little boost to the price of 6/1 so I’ll be going with them on this occasion.

Wednesday's Nations League Acca
Italy, Norway, Portugal & Russia all to win
6/1
Italy are unbeaten in 18 games and take on Frank de Boer's Netherlands who have failed to win in their last two games against Mexico and Bosnia Norway won the reverse fixture against Ireland 5-1 in Belfast in September and Erling Haaland is a man inform after scoring a hat-trick at the weekend Portugal kept clean sheets against France and Spain and face a much weaker opposition in Sweden Russia won the reverse fixture away in Hungary and after a solid display against Turkey they can take three points in Moscow
Odds correct as of 2020-10-13 13:00 Odds subject to change.

The first team I’ve opted for to get the win on Wednesday is Italy, who take on the Netherlands in Bergamo. Roberto Mancini’s Italy are currently on an 18 match unbeaten run. The last time they tasted defeat was back in September 2018 and I don’t expect that to come to an end against the Netherlands.

The Italians won the reverse fixture in Holland just over a month ago and they will fancy their chances again back on home soil. Frank de Boer has made a poor start to life as manager of his national side with defeat against Mexico before a 0-0 draw with Bosnia. The flying Dutchmen have failed to score in both of those games and at even money, Italy look potentially the bet of the evening.

For my second selection, I’m moving across Iberian peninsula to Portugal, where the hosts take on Sweden. I’m backing the Portugese to come away from this tie with the three points. They have been watertight at the back in their two previous games in this International break with goalless draws against both France and Spain.

Cristiano Ronaldo will be chomping at the bit to get back on the trail of Ali Daei, who leads Ronaldo by eight goals in the all time International scorers records. Portugal face a much weaker opposition on Wednesday than they have in their previous two matches, they won the reverse fixture in Sweden 2-0 in September and I see another solid victory coming here.

Norway are scoring goals for fun at the moment and I fancy them to do a job on Northern Ireland in Oslo. The hosts have scored nine goals in their last two Nations League matches and they seem to have put the disappointment of failing to qualify for the Euros behind them.

Erling Haaland bagged himself his first ever International hat-trick at the weekend and is a young man with an ever growing ruthless streak to his play in the final third. Norway beat Northern Ireland 5-1 at Windsor Park in September and I can only see the result going one way on Wednesday night.

The final selection of the evening comes from Moscow, where I’ve gone for a home win for Russia against Hungary. This is yet another game where the reverse fixture was won by the away side, this time Russia coming out 3-2 winners against Hungary in September.

Hungary have had a good International break with wins over Bulgaria and Serbia. They’ve also scored in all their matches this calendar year and we could be in for a good few goals in Moscow. Despite Hungary’s last two results I think Russia can come out on top. They were unlucky not to take three points against Turkey at the weekend and they can make amends for that on Wednesday to bring home this 6/1 acca.

There’s plenty of football tips on BettingOdds.com this week including a full preview for the England v Belgium game that can be viewed here. Best of luck to those following the selections, please always gamble responsibly

Erling Haaland is simply a weapon 🚀