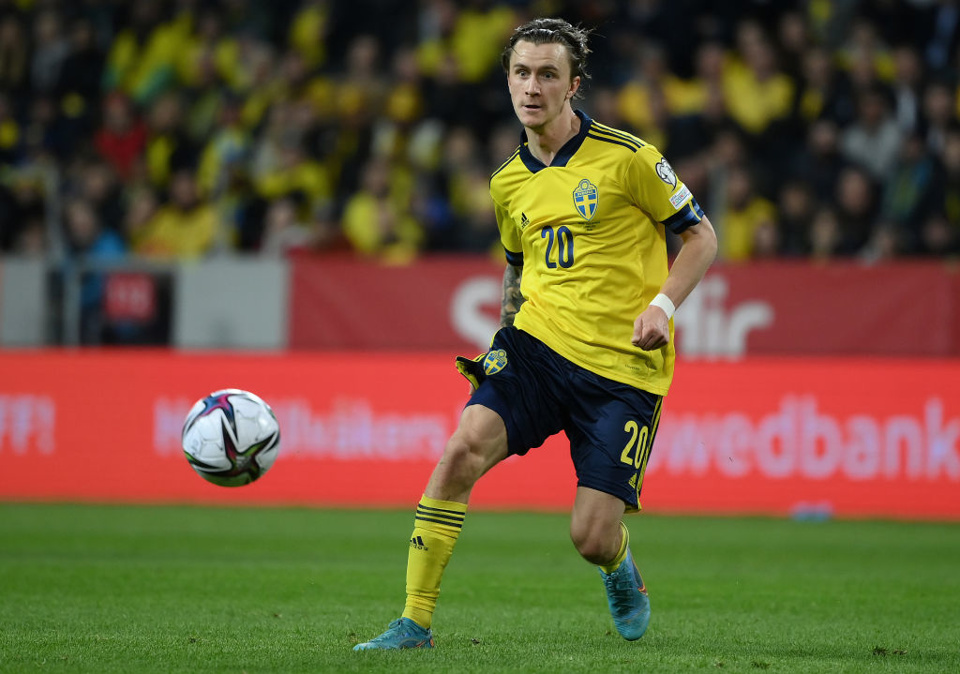 Kristoffer Olsson has been booked in two of his five appearances for Sweden this season
By Luke Hamilton
15:07 Monday 28th March 2022 - 4 minute read

Before we return to domestic club football this coming weekend, there is the small matter of World Cup European qualifying play-offs to finalise first.

Poland, Sweden, Portugal and North Macedonia are the four teams vying for a spot at December's international competition in Qatar, but come Tuesday night, two will have their places confirmed, while two will know they have missed out from the first winter tournament.

It's Poland vs Sweden that takes centre stage here as our very own @LAHamalam on Bet Builder duty, choosing two selections that have caught his eye to form this 14/1 double.

Sweden narrowly edged past Czech Republic 1-0 on Thursday thanks to a Robin Quaison 110th-minute winner. There wasn't much to separate the two sides in normal or extra time, with the 28-year-old's strike proving the all-important difference maker.

It was a heavily contested affair, with both nations picking up four yellow cards each over the course of the match. One of those names who forms the first half of our Tuesday Bet Builder is Kristoffer Olsson.

The Anderlecht midfielder has become a staple in Janne Andersson's team, anchoring a central pairing in the middle of the park to great effect. There's a real understanding both individually and collectively in this well-oiled Swedish team - every player understands their own role, as well as what they have to do for the betterment of the group.

Which when playing in the heart of the midfield can often mean cynical or necessary fouls being committed. Olsson is no stranger to this, with his numbers in the cards and fouls department speaking for itself. This campaign - including last summer's European Championships - the 26-year-old has made 41 appearances for both club and country. He's been booked on seven different occasions, including on his last outing for Sweden against Czech Republic.

Across the 36 caps he's gained for his country, he's also received seven cautions, with two of those coming in the nine World Cup Qualifying matches Sweden have had to play so far.

Tuesday's game pits two rather equally matched teams against one another and that more often than not results in cards being brandished quite heavily, especially when there are high stakes at play like a place at the World Cup later this year.

In Poland's case, they were awarded a bye into the play-off final due to Russia's ongoing invasion of Ukraine. They did, however, still feature midweek, playing a friendly vs Scotland with all proceeds raised being donated to the Ukrainian fund.

Keeping the attention on the cards in this match up has resulted in us identifying Matty Cash as the second selection. The Aston Villa defender received his Polish passport in October 2021 through his mother and after making his debut a month later, hasn't looked back since.

The winger-turned-full-back has captured the hearts of Poland and Villa fans alike for his tenacious playing style, plus the tangible energy and aggression he displays out on the pitch.

Despite only making three appearances at international level, the 24-year-old has slotted right in, operating in a wing back role that plays well to his strengths as a former winger at Nottingham Forest, as well as his current responsibilities in Steven Gerrard's new-look Aston Villa side.

In terms of bookings, Cash is usually good value for entering the referee's book - having done so eight times for the claret and blues this season. He has also received a yellow while on international duty, coming in a 2-1 defeat to Hungary just a couple of games ago.

As previously mentioned, the stakes couldn't be higher for both teams heading into this one, so expect tensions to flare and the referee needing to manage plenty of smaller moments in a tasty clash. And since Cash is a blood and thunder type of individual, he will be desperate to ensure he is in attendance at his first World Cup this December, no matter what that demands.

Kristoffer Olsson & Matty Cash to be booked
14/1
Odds correct as of 2022-03-28 14:55 Odds subject to change.
Opt-in
Sign-up to receive emails when new additions are made to the Opta Tool
Sign-up
By clicking opt-in you agree to our privacy policy and terms and conditions below
Opt-in
Your Details
Complete your details below to enter:
Full Name
Email
SUBMIT
Please fill in both your name and email
Opt-in
SUCCESS!
Thank you for your submission.