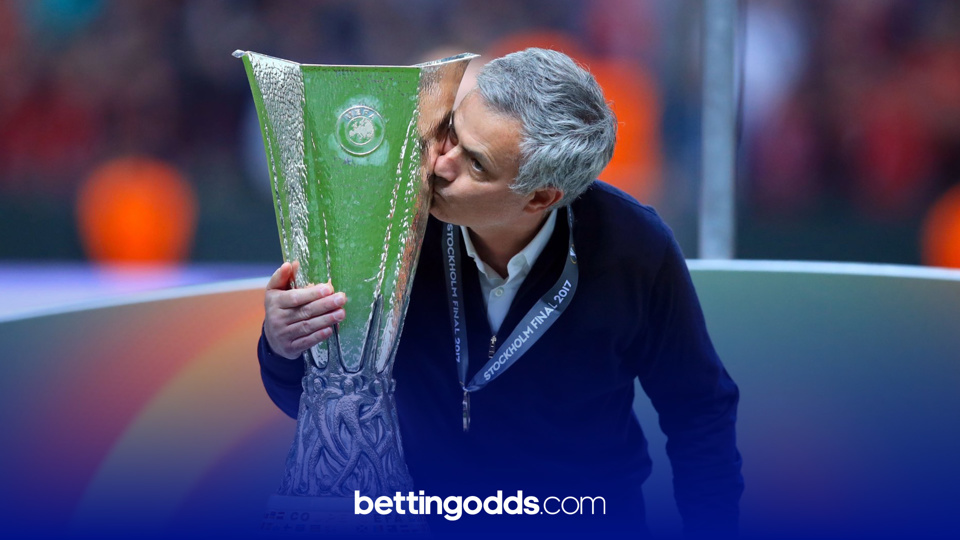 Jose Mourinho won this competition back in 2017 and his Spurs side feature in our football accumulator tips
By Anthony Eadson
13:17 Wednesday 21st October 2020 - 4 minute read

The Europa League group stage returns on Thursday with Arsenal, Tottenham, Leicester, Celtic and Rangers all featuring from the home nations. North London dominates the outright betting market for this season’s renewal of the competition, with both Arsenal and Tottenham priced at 7/1 joint favourites to lift the trophy.

There’s a spread of fixtures on Thursday with twelve games at 5:55pm and twelve games at 8:00pm. I’ve decided to focus on the 8:00pm matches and have picked out three football tips I like the look of for the game. The treble pays around 3/1, however those good folk over at Paddy Power have given this a generous boost up to 4/1.

Europa League Acca
Leicester & AC Milan to win, Tottenham -1 handicap
4/1
Leicester face Zorya who have only won once in their first five games of the Ukrainian Premier League AC Milan sit top of Serie A after a perfect four wins from four including three clean sheets. Celtic have lost two of their last home games. Spurs face LASK who were beaten 3-0 by Rapid Wien at the weekend and Gareth Bale should start for the hosts who put seven past Maccabi Haifa in the last round.
Odds correct as of 2020-10-21 13:05 Odds subject to change.

The first of three British sides I’ve focused on is Spurs who I’m fancying to win by two or more goals (-1 handicap). Jose Mourinho’s side threw away a three goal lead in the last ten minutes of the game against West Ham at the weekend and will be keen to bounce back here in the Europa League.

Tottenham face LASK from Austria, a side who were beaten 5-0 and 2-1 by Manchester United in this competition last season. They were also hammered 3-0 at the weekend by Rapid Vienna and have taken seven points from their first four league games. Despite making numerous changes to the side at the weekend I expected Jose Mourinho to field a strong line up. He’s a man who has taken this competition seriously with Manchester United and his Spurs team have racked up 12 goals in their three games so far in this campaign.

Gareth Bale could well start here after being used as a substitute at the weekend and with the likes of the Welshman, Dele Alli, Erik Lamela all set to come into the side I can see Tottenham scoring plenty. After beating Maccabi Haifa 7-2 at home in their previous game in this competition Spurs should come out comfortable winners and therefore I’m taking them on the -1 match handicap, meaning if they win by two goals or more this leg will land.

Next in the trio of selections for Thursday is Leicester City, who I’m backing to win against Ukrainian side Zorya. Leicester come into this clash off the back of two consecutive home defeats in the Premier League. Leicester have failed to score in both of those, but they can set the record straight with a win to kick off their European campaign.

Zorya, who also have faced Manchester United, took on the Red Devils four years ago, losing 1-0 at Old Trafford and 2-0 back in the Ukraine. Zorya currently sit sixth in the Ukranian Premier League with just one solitary win from their first six games.

There could be wholesale changes made by Brendan Rodgers but I’m expecting James Maddison to start after a long injury lay off. The creative midfielder offers plenty in the final third and with quality like that on show, Leicester should have too much for the visitors. Jamie Vardy will not be rushed back from injury and Islam Slimani could come into the side if called upon.

I’m heading north of the wall for the final selection of the evening for Celtic v AC Milan, where I’m fancying a win for the Italians. Both of these sides come here after featuring in derbies at the weekend. Celtic came off worse against Rangers with a 2-0 defeat, whilst AC put Inter to the sword with a 2-1 win courtesy of a brace from 39-year-old Zlatan Ibrahimovic.

Stefano Piolo’s side currently sit top of the Serie A table after four wins from their first four matches. They’ve kept clean sheets in three of those and it does not bode well for Celtic who have uncharacteristically lost two of their last five home matches. Zlatan and a few others may be rested here but I still see AC being solid at the back with Donnarumma and Romagnoli at the spine of the team. Milan are a side on the up and the gap in quality should prove the difference on Thursday evening.

Best of luck to those following the selections, please always gamble responsibly.