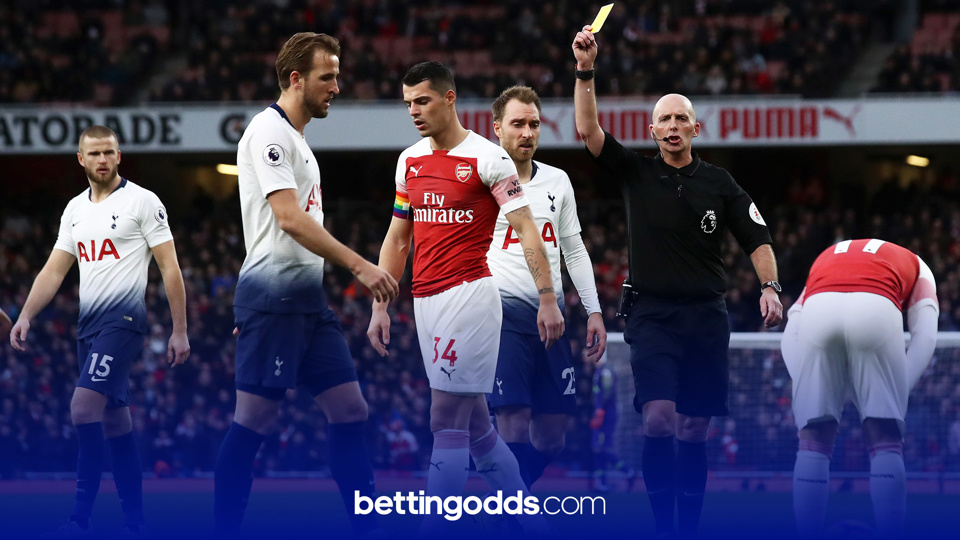 We even have a picture of Granit Xhaka getting booked it happens that often!

Our Monday fourfold acca comes from four different leagues around Europe and involves four different markets. We have a card being shown, a match result, a player to score anytime and a BTTS leg. With Paddy Power offering a Free Bet if one leg of your fourfold lets you down, Neil Monnery tucks into this 25.4/1 shot with the bookie...

Granit Xhaka to be shown a card vs. Newcastle at 7/4

Since returning from a Medial Collateral Ligament injury in December, Arsenal’s number 34 has seen the flash of yellow nine times in 20 league games. So nearly one in two, which indicates the 7/4 price is about on the money. This is a huge game for the visitors and with Newcastle having plenty of skillful players who like to run with the ball, coupled with what I expect to be a furious atmosphere, having the 29 year-old to be booked as part of a fourfold seems a fairly decent punt.

Silkeborg vs. Midtjylland - Away win at 6/4

If you are a believer in recent history being a good indicator of what will happen in the future then this is a leg for you. Midtjylland have won seven on the bounce against Silkeborg and even though this is third vs second in the league - the away side have the wood over their opponents in recent times.

Both teams are locked into their final league positions with Bo Henriksen’s men set to finish second and will qualify for the Champions League qualifying stages with Kent Nielsen's side set for the Europa Conference League. With little to play for bar bragging rights, I like the away side to want to keep up their recent fine record.

Ciro Immobile to score in the Lazio vs. Juventus game at 7/5

The Italian international is lock stock and two smoking barrels ahead of his rivals in the Serie A goal scoring charts having netted 27 times so far this season, which is four ahead of his closest rival Dusan Vlahovic who has split his season between Fiorentina and Juventus following a January transfer.

Widely considered by many as one of the most underappreciated strikers of his generation, this has been his year for getting recognition and he’s hit the back of the net in three of his previous four matches. Scoring at the Allianz Stadium in Turin is not an easy task but Juve have surprisingly conceded in seven of their past eight in all competitions.

Sampdoria vs. Fiorentina BTTS at 6/10

To round off this fourfold I’ve gone for a short priced based solely on statistics. Games at Sampdoria this season have resulted in BTTS coming in 67% of the game. For Fiorentina, they have seen BTTS come in exactly 67% of the time as well when looking solely at their away fixtures in the league. So the numbers indicate both goalkeepers will be bending down to scoop the ball out of the back of their respective nets later this evening.

Xhaka to be carded, Midtjylland to win, Immobile to score and BTTS at Sampdoria
25.4/1
Odds correct as of 2022-05-16 12:15 Odds subject to change.
Football Accumulator Tips