Football Accumulator Tips: Back this League Winners 4-fold at 1154/1

In the last five seasons Pep Guardiola's side have averaged 91.6 points per campaign
By Anthony Eadson
14:05 Tuesday 26th July 2022 - 5 minute read
Bet £10 & Get £50 in Free Bets
#AD Bet £10 & Get £50 in Free Bets for new customers at bet365. Min deposit requirement. Free Bets are paid as Bet Credits and are available for use upon settlement of bets to value of qualifying deposit. Min odds, bet and payment method exclusions apply. Returns exclude Bet Credits stake. Time limits and T&Cs apply.
Bet £10 Get £40 in Bonuses
#AD New 18+ UK customers only. Register using the promo code WELCOME40, deposit and place first bet of £10+ on Sports (cumulative Evens+) within 7 days of registration. First bet must be on Sports. £30 in Free Bets and £10 in Free Spins (50x20p) credited within 10 hours of bet settlement. Free Bet stakes are not included in any returns. Bonuses have a 7-day expiry. Payment restrictions apply. SMS verification and/or Proof of I.D and address may be required. Full T&Cs apply.
Bet £10 Get £10 In Free Bets (APP Only)
#AD New UK, IE & Malta customers only. Min £10/€10 first deposit using Debit Card. Place a bet of £10 at min odds of 1.5. Free bets expire in 90 days. Full T&Cs apply.  18+. BeGambleAware.org, T&Cs apply.

The new season is almost here with the Football League getting underway on Friday evening, before the Premier League commences seven days later. As part of our ante-post series here at BettingOdds.com we’ve decided to put together a four-fold accumulator, with our potential winners of England’s top-four domestic leagues.

We’ll start off with the Premier League where Pep Guardiola’s side have won the title in four of the last five renewals and average an astonishing 91.6 points per season across that period. We are very much under the impression that Liverpool are the only team who could potentially challenge Manchester City to the title in 2022/2023, but the addition of Erling Haaland should give City a new dimension in attack, with one of the most potent strikers in world football joining the club his father once played for.

We are not going to get rich backing City as a single to lift the trophy, with their price looking particularly short at around 8/13. Even the best teams have to find ways to improve and City look to have done so this summer by adding Kalvin Phillips, Julian Alvarez and Erling Haaland. Pep’s men have amassed 100, 98, 86, and 93 points in their last four title winning seasons, and it’s also worth noting that in the last two of those, bet365 have paid out in February, when they were 10 points clear in the table.

The favourite to win the Championship with the bookmakers has finished in top spot the last three seasons and we are predicting Norwich to continue that trend and be crowned league winners, priced at 11/2.

Leeds (5/1), Norwich (13/2), and Fulham (11/2), are the three Championship winners who went off favorites in the last three renewals and went on to be crowned winners, with the Canaries being one of several yo-yo clubs reaping the benefits of parachute payments.

With Tim Krul in goal and Grant Hanley taking control of the defence, Norwich have a strong base. The addition of Isaac Hayden in midfield appears to be a positive one, and with Teemu Pukki, Milot Rashica, Idam Idah and Josh Sergeant providing the attacking options, they should have enough firepower to see them mount a serious title challenge. Dean Smith has tasted Championship promotion already, and with him keeping the core of his squad that were relegated last term, we fancy them to bounce back at the first attempt. 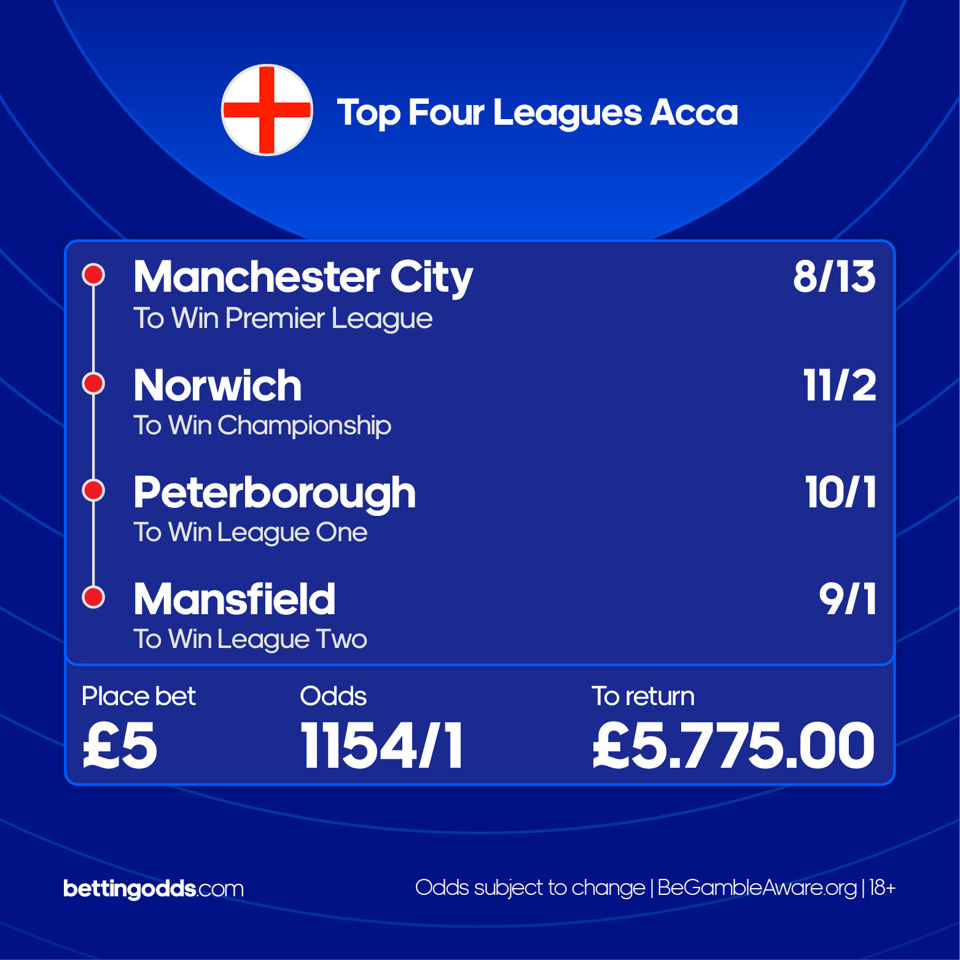 Out of the last 10 seasons in League One, nine have included at least one team being promoted that had been relegated from the Championship the campaign before. Peterborough fall into that category after tasting relegation in May, and we think Posh look well poised to make a charge back to the Championship in the coming months.

The last two seasons that Peterborough have participated in League One, they have finished as the top scorers in the division. In Jonson Clarke-Harris and Jack Marriott, they are not short of goals, with the former the favourite to win the top-scorer award, at as short as 4/1 with one bookmaker. Grant McCann is the man tasked with sending Posh back up, and he has experience at this level, when winning the league title with Hull back in 2020/21. Both Sheffield Wednesday and Ipswich look a little short in the betting for our liking and with quotes of up to 12/1 about Posh lifting the trophy, we think they look an attractive proposition.

The Stags were beaten 3-0 in the play-off final at Wembley just a few months ago, but after winning just two of their opening 14 fixtures, they had done incredibly well to be there! In fact, Mansfield took an impressive 66 points from their final 32 matches in 2021/2022.

Mansfield look like potential front-runners for the season ahead and although they have been a little quiet in the transfer market, the two signings they have made look to be strong ones.Hiram Boateng, who’s energy helped Cambridge achieve promotion two years ago, has arrived from MK Dons, whilst youngster Will Swan has made the short switch from Nottingham Forest. Manager Nigel Clough has held on to the core of his squad from last season and on paper they look primed to challenge. Quotes of 10/1 are available on Mansfield lifting the League Two trophy in May.

Adding those league winners into a 4-fold pays 1154/1. We’d advise using bet365 here for their Early Payout offer, where if the team you back takes a lead of 10 points or more at any point of the season, you will be paid out as a winner.