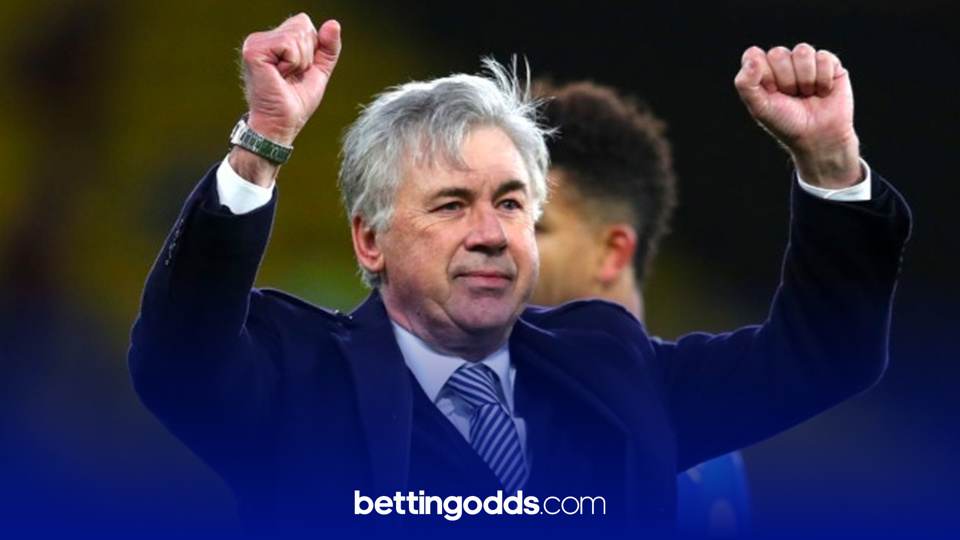 Everton to win and both teams to score has landed in their last three games and we fancy another repeat on Wednesday as part of our accumulator tips
By Anthony Eadson
17:04 Tuesday 29th September 2020 - 5 minute read

There’s four EFL Cup fixtures on the menu on Wednesday evening with eight teams having the chance to book their place in the fifth round. Both Manchester City and Manchester United are in action with Pep Guardiola’s side travelling up the M66 to Burnley. City are the current 5/2 favourites to win the competition for a fourth consecutive season, and if we look back further to that, they have won five of the last seven.

Manchester United take on Brighton for the second time in five days at the Amex. The Red Devils were awarded a last gasp penalty that ensured they took away three points in a game the Seagulls won’t believe they’ve lost.

There’s a range of kick-off times on Wednesday with the first coming at 17:30 from Newport, where the Welsh outfit entertain Newcastle. That’s followed by three later games all commencing between 19:00 and 19:45 which I’ve picked out a nice little treble for as part of my football tips for bettingodds.com this week.

EFL Cup 4th Round - Wednesday acca
BTTS in Burnley v Man City & Brighton v Man United, Everton to win & BTTS
10/1
City conceded five goals against Leicester on Sunday and look vulnerable at the back Brighton will be keen to get revenge after the 3-2 defeat to Man United on Sunday.  Everton to win and both teams to score has landed in their last three matches
Odds correct as of 2020-09-29 17:00 Odds subject to change.

The first selection I’m including in this EFL Cup treble is both teams to score in Burnley v Manchester City. Neither of these two sides have started this season particularly well with Burnley having lost both of their league games to Leicester and Southampton most recently at the weekend. There’s ongoing speculation around the future of James Tarkowski and the centre-back has been struggling to shake off a toe injury and may miss out again on Wednesday.

To the amazement of many, a Pep Guardiola side conceded five goals for the first time ever on Sunday as Manchester City were beaten 5-2 at the Etihad against Leicester. The Cityzens have already seen their odds drift from 4/5 out to 6/4 with some bookmakers with Liverpool now being given a 52% chance of repeating last year's success with odds of 10/11. Much of the concern around City is due to their ongoing issues at the back, and even with Aymeric Laporte back in the side, I think Burnley can score.

City have conceded in each of their last five games, including at home to Bournemouth in the EFL Cup third round. Both teams to score looks the correct play here at 3/4 with both sides set to make wholesale changes.

The second of two both teams to score selections I’m throwing into the mix is, Brighton v Manchester United. These two sides met on Saturday lunchtime in the Premier League in one of the most bizarre games in recent history. Brighton lost the game 3-2, however this did not tell the full story. Brighton had led in the game thanks to a Neil Maupay and went on to hit the woodwork an astonishing five times, a Premier League record, They were given an expected goals (xG) figure of 2.88 for the game in comparison to Manchester United’s 1.92, and they will feel incredibly hard done by after the visitors converted a 99th minute penalty to steal all three points.

United have lost on two of their last four trips to Brighton and they can be a team who they often struggle against. There will be plenty of changes from both managers here as they look to protect the fitness of players, combined with the hectic fixture schedule.

Graham Potter’s side will be up for this one after Saturday’s events and even with a second string side I have faith that they can find the net against a United side who still seem to lack the sharpness they had at the back end of last season.

The third and final selection in this 10/1 treble is Everton to win and both teams to score in their game against West Ham at Goodison Park. I tipped up the Toffees to win as part of a winning treble last Wednesday in the EFL Cup when Carlo Ancelotti’s side overcame Fleetwood 5-2 to book their place in the fourth round.

Everton fielded a side that even still included the likes of Richarlison, Dominic Calvert-Lewin and Gylfi Sigurdsson and Lucas Digne against Fleetwood and I think Carlo Ancelotti will stick to this for the game against West Ham. This could be a perfect way for the Italian to bring a trophy to Merseyside this season and with odds of just 9-1 to do so, there’s certainly a few who think he can.

I think Everton will win this game well. They have been efficient in their opening three Premier League matches, notching up three wins. I do think West Ham can get on the scoresheet though. In Manuel Lanzini, Felipe Anderson, and Sebastien Haller I the Hammers have enough attacking flare to create chances. This selection of Everton to win and both teams to score has landed in their last three games and I’m hoping they can make it four, come ten o’clock on Wednesday.

Please always gamble responsibly, best of luck to those following the selections.