FA Cup Booking Tips: Matic is a great price to find the book against Liverpool

With the FA Cup taking centre stage again, our focus here at BettingOdds.com turns to the fourth round of the competition and I've taken a look into the stats to see which players could be in with a chance of finding the referee's notepad this weekend.

These three players are well-priced as singles, but if you're after a bigger price then combining each of the selections pays a whopping 57/1 with bet365, who are offering the best price on the market for the treble.

We begin at Oakwell, where this all-Championship affair sees Barnsley and Norwich lock horns for a spot in the fifth round.

The visitors are flying high in the second tier at present while their opponents sit in 11th spot, so naturally it is the Canaries who have been made the bookmaker favourites.

Indeed, this is the cup and the form book is completely thrown out, and I think that Barnsley can cause Daniel Farke's side some issues given their solid form on home soil (four wins from last five).

Tykes midfielder Callum Styles is predicted to line up opposite the tricky Todd Cantwell here which will not be an easy task.

The Norwich winger has been fouled on average 2.9 times per game this season - more than any other player in the Canaries squad - while Styles is averaging a foul a game and is his club's joint-most booked player this term with five yellows to his name; this seems a perfect match for the 20-year-old to find his name taken once more this weekend. 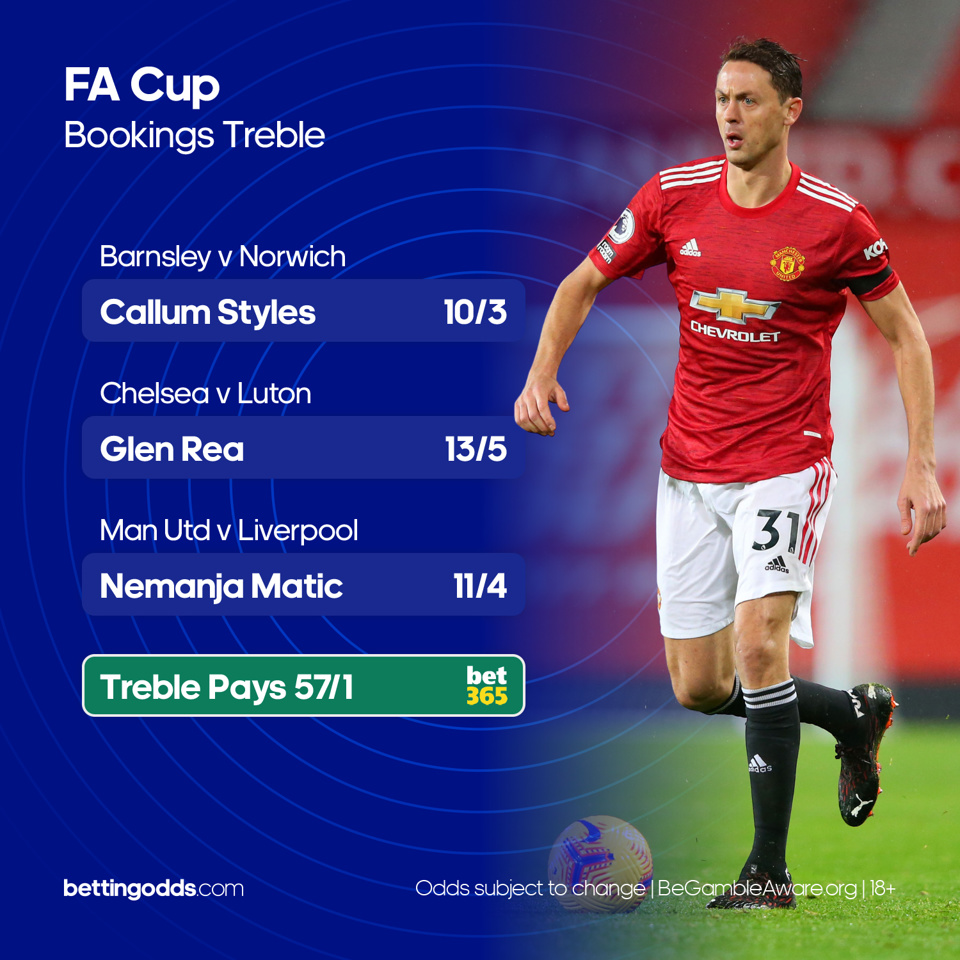 Luton are going to have a huge job on their hands to make it past Chelsea here, but with the hosts currently experiencing a real dip in form there is every chance of an upset.

But it certainly won't be easy and the Hatters will be chasing the game for large periods, which should, in theory, lead to some tired challenges as clock ticks on.

Should this prove to be the case then my money is on Luton defender Glen Rea to find his way into the notebook.

The 26-year-old is averaging 1.5 fouls per game in the league this season and has seen his name taken five times - no player in the Bedfordshire club's squad has more in 20/21.

Tasked with marking the likes of Timo Werner, Hakim Ziyech, Kai Havertz or Callum Hudson-Odoi - depending on which players are selected by Frank Lampard - I can potentially see Rea committing a rash challenge in an attempt to contain his opponent, which could see him cautioned at Stamford Bridge.

To finalise this treble I'm heading to Old Trafford, where Liverpool and Manchester United do battle for the second time in seven days.

This time the Premier League is put on hold, though, and focus turns to which of these north-west titans will book their spot in the fifth round.

There should be some squad rotation from both managers for this one and WhoScored.com are predicting Nemanja Matic to get the nod in central midfield ahead of Fred.

The Serbian has been booked three times in 10 starts for United this season (all comps) and averages a foul pG in the Premier League and 1.3 fouls pG in the Champions League.

In a game that both sides will be so desperate to prevail in I'm expecting plenty of firm challenges, especially in the midfield area where this fixture could well be won and lost.

If this proves to be the case then Matic will be one of the first candidates to receive a card, so he rounds off my trio of booking tips to make the treble a tasty 57/1.

Good luck to anyone following these tips and please remember to gamble responsibly.