FA Cup 2022: Everything you need to know about this year's domestic cup competition

If you're English and you grew up watching football, then there's no doubt that the FA Cup holds a special place in your heart. No matter where you're from, what you do or who you support, the oldest national football competition in the world is the thing that makes young children dream and old people weep.

The 150 year old cup competition has been ongoing since August 7th 2021, days before the new Premier League season even began. These preliminary and qualifying rounds see 184 matches played, culminating in January's Third Round which is when the real magic starts.

Teams from the first and second tiers of English football - the Premier League and Championship - enter at this stage and play out 32 matches when anything and everything is possible. 'The magic of the cup' was a phrase born out of the competition's ability to never cease to amaze when it comes to thrilling matches and giant exits at the hands of footballing minnows.

In anticipation, we've delved into everything you need to know about this year's competition - the format, any Covid-related changes to its usual nature, the date of the final, all 32 Third Round ties, a list of previous winners from the past 10 years along with the clubs with the most wins and the all-important outright favourites according to the bookies to lift the coveted trophy at Wembley come May.

Format and Any Changes

The FA Cup is a knockout football competition consisting of 14 rounds in total. Excluding the preliminary and qualifying rounds played from August through to October, there are eight proper rounds in which the 92 English football league clubs are involved in to some capacity or another.

Its final is set to take place on Saturday 14th May 2022 at Wembley Stadium. Although there is not a provisional kick-off time at the moment of writing, if history is anything to go by, expect a 5:15pm start which is in place to honour the 3pm blackout present in English football.

Traditionally, during the Third, Fourth and Fifth rounds, any games that end as a draw within 90 minutes would have a replay scheduled for a fortnight or so later, played out at the reverse team's stadium. That, however, has been done away with in the third and fourth rounds for the 2022 version of the competition, with ties having to be decided on the day through extra-time and penalties if required.

This change will cause huge financial ramifications for the lesser sides, who dream of a Premier League scalping to progress further into the tournament or rely on away replays against some of the biggest sides in world football to help fund the remainders of their season.

It's a decision that doesn't come at all lightly, and has been made so as not to further congest the fixture schedule, with many Covid-related postponements already having affected all four English leagues dramatically over several weeks.

The FA have concluded that replays will return up to and including the Fourth Round of the competition from the 2022/23 season onwards.

Previous Winners from the Last 10 Years

Clubs with the Most Wins in History 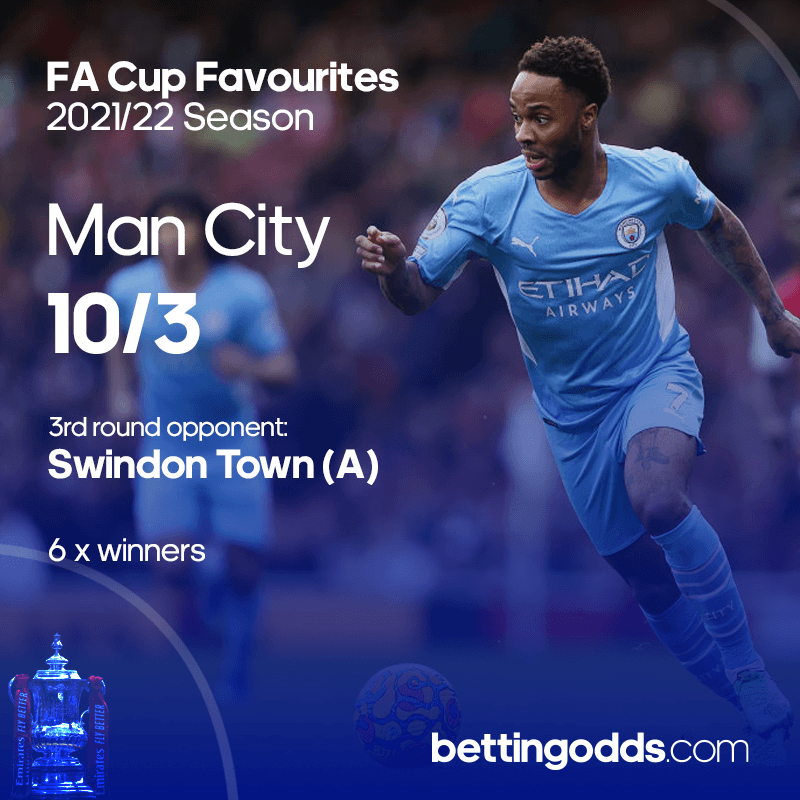 Leicester City became the 43rd club to get their hands on the trophy, beating out Chelsea 1-0 thanks to a Youri Tielemans strike in the second half. The Foxes despatched Stoke, Brentford, Brighton, Man Utd and Southampton on their route to the final and defied the odds with a historic cup victory worth 16/1 in the outright market ahead of their entry.

Before detailing those heading up the betting, Brendan Rodgers' side are available at the very same price to retain their trophy during the 2021/22 run. Now here are the four favourites for this year's prize, according to the bookies:

To no surprise, Man City sit top of the table as they tend to in most instances. Across the board, Pep's men are priced up at 10/3 to win only their third FA Cup in over 40 years. The Citizens don't have the same level of dominance they've held over the League Cup since their takeover, with Roberto Mancini and Pep Guardiola the bosses to deliver it to the Blues.

City could in fact have made it three in 11 seasons had they not been on the receiving end of a major final upset at the hands of Roberto Martinez's Wigan Athletic back in 2013. Last season, they exited in the semi-finals to Thomas Tuchel's Chelsea, who proved to be a real thorn in Pep's side, defeating him on three different occasions including the most devastating time of all in the Champions League final.

Naturally, City's domestic power always assures they'll be at the top of just about every outright market but if two consecutive semi-final defeats are anything to go by, there could prove to be some value elsewhere in the betting. 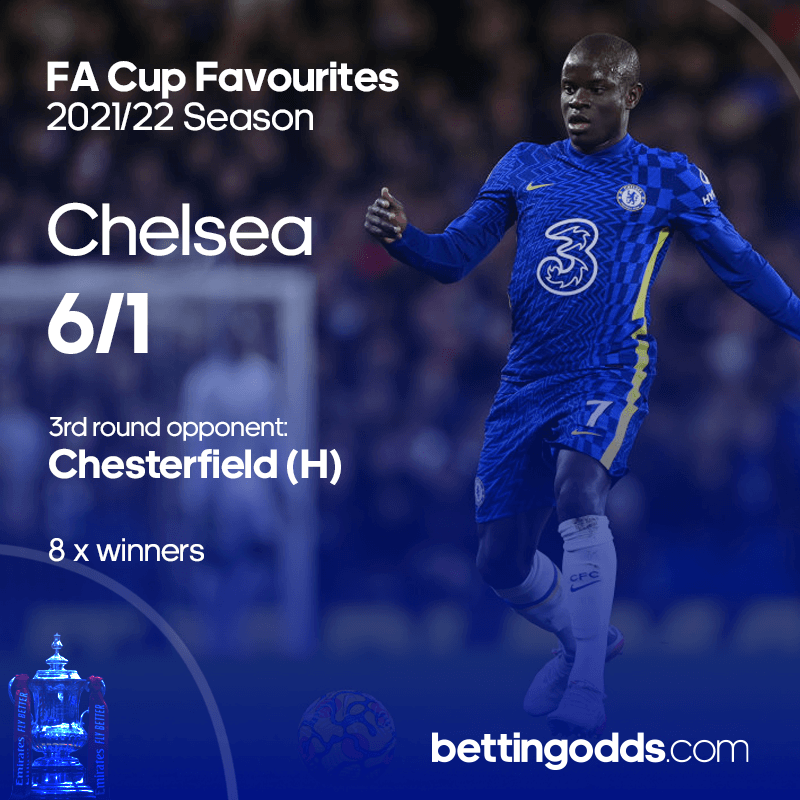 Next in line are last season's runners up Chelsea. Thomas Tuchel's men enjoyed an extraordinary 2021 revival after the German's appointment in almost a year ago. Following Frank Lampard's deterioration, the Blues had a barnstorming second half of the season which saw them finish in the top four of the Premier League, win the Champions League for only the second time in the club's history and also reach the final of this very cup competition.

It's safe to say Tuchel has revolutionised the London outfit, most notably by creating a resolute defensive foundation of which to shape the rest of his team around. And although their standards appear to have dropped lately, you'd be silly to doubt that he isn't capable of again making them as formidable as they've been under his tenure.

Chelsea are seven times winners of the FA Cup, five of which have happened in this century; with the 2017/18 campaign offering their latest taste of success in the competition. Their price isn't too surprising given the club's FA Cup record since 2000, as well as their noticeable improvement over the past 12 months - the latter which sees them now above Liverpool in the outright market this time around. 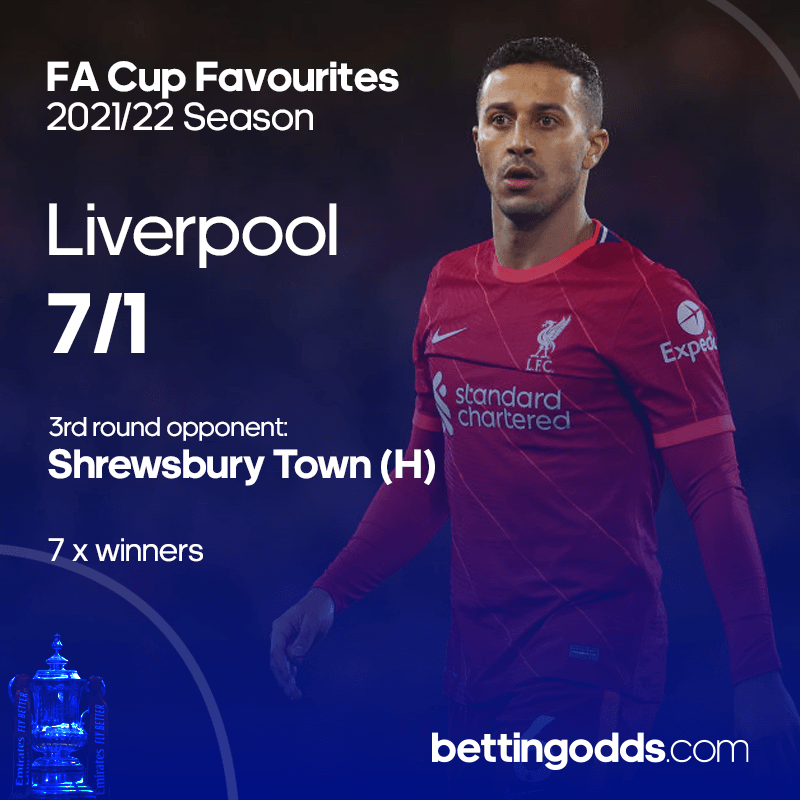 Jurgen's Reds seemingly can't catch a break. Their chase of a second Premier League title is being consistently thwarted by the blue side of Manchester and anything less than perfect leaves them falling short every single time.

During Klopp's so far six-year tenure at Anfield, his side have never been much of a cup team. They've chased and won both major honours in the Premier League and Champions League, but their runs across both domestic cup comps have left something to be desired.

Their last FA Cup triumph came in one of the competition's most memorable finals, when Benitez's side eventually beat out West Ham through penalties following a thunderbolt stoppage time equaliser courtesy of Steven Gerrard.

They do, however, find themselves in the semi-finals of the Carabao Cup this term as well as a favourable home tie to Shrewsbury in the Third Round of this one. With the PL title all but out of their reach, could Klopp turn his attentions to other domestic silverware? If so, 7/1 looks like a decent price for Liverpool to lift the trophy. 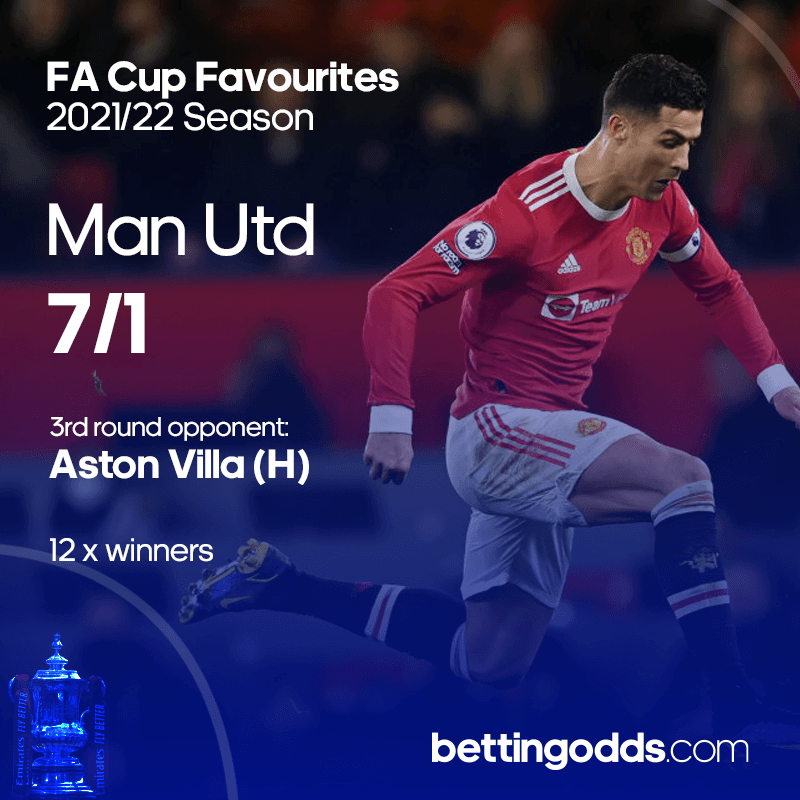 This one looks rather oppositional in value to the previously mentioned team, especially when you consider that the two are currently worlds apart from one another. United are undergoing the umpteenth transitional period since Sir Alex Ferguson's departure, this time with Ralf Rangnick the man to temporarily steady the ship on an interim basis before handing the keys over to someone else in the summer.

Before their Monday night defeat at home to Wolves, the Red Devils had largely flattered to deceive in their opening four games of his tenure, remaining unbeaten before Bruno Lage's side stormed Old Trafford. The worrying thing at both ends of the spectrum for Man Utd is they never seem a million miles off returning to their former glory but equally, it feels as if disaster is just a moment's notice away.

You never know what you'll get from them and the bookies typically cover themselves by placing less than favourable odds by their side across any and all competitions. To have them priced up the same as Liverpool is quite frankly insulting, even more so when you consider that United face a tough test against Steven Gerrard's Villa side in the Monday night Third Round clash.