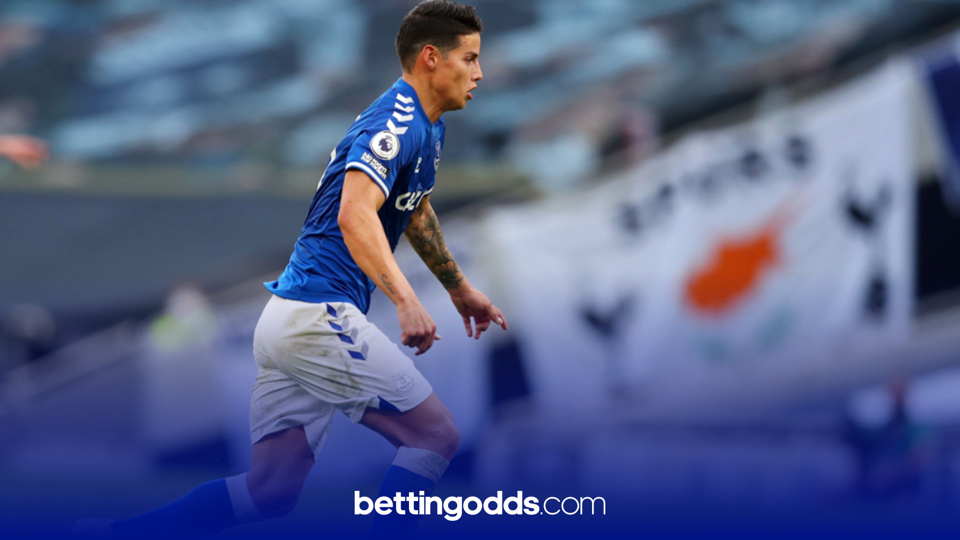 James Rodriguez has landed a shot on target from outside the box in four of his last five games and features in our 9/4 tip for the game
By Anthony Eadson
16:58 Thursday 5th November 2020 - 5 minute read

With pressure growing around the future of Ole Gunnar Solskjaer, Manchester United travel to Goodison Park on Saturday lunchtime to face Carlo Ancelotti’s Everton. Our man @AnthonyEadson has three football tips for the game which kicks off at 12:30 and can be viewed live on BT Sport 1.

Carlo Ancelotti this week has said that James Rodriguez is recovering well from his ‘small injury’ and should be fit to play against the Red Devils this weekend. Lucas Digne returns from a one match suspension whilst Richarlison will have to sit out as he serves his three match ban. Andre Gomes and Ben Godfrey are also a doubt for the hosts.

After Manchester United’s disappointing loss in Turkey on Wednesday there’s plenty of decisions for Ole Gunnar Solskjaer to make regarding his starting lineup. Victor Lindleof, Allex Telles and Jesse Lingard are all a doubt for the game with Eric Bailly also set to miss out through injury.

Manchester United have actually won their last six away fixtures in the Premier League and come into the game as the 7/5 favourites, an implied 42% chance of victory. The draw can be backed at 12/5 with a win for the Toffees available at around 19/10.

Everton v Manchester United
James Rodriguez 1+ shot on target from outside the box
9/4
Rodriguez has landed one or more shots on target in five of his six games this season Four of those five games have seen this selection land with a shot on target from outside the box Looks good value with this selection landing in 66% of Rodriguez's fixtures this season and odds implying only a 31% chance Sky Bet, same selection 10/11
Odds correct as of 2020-11-05 16:15 Odds subject to change.

Lockdown II may be upon us but there’s still plenty to be grateful for this weekend with some top class Premier League action. The first of my three tips for Saturday lunchtime is James Rodriguez to have one or more shots on target from outside the box. This selection has been given a little boost off those good folk over at Paddy Power which now pays 9/4.

James Rodriguez has been one of the best players to watch so far this season and he should return to the starting line-up against United after missing the game against Newcastle with a bizarre testicle injury.

With this selection landing in four of Rodriguez’s last five games, and with Sky Bet having the same selection priced at just 10/11, I’ll be getting fully onboard with the 9/4 offering from Paddy Power, should he start on Saturday.

Dominic Calvert-Lewin to be carded
9/2
Only one player in the Premier League committed more fouls than Calvert-Lewin last season Booked nine times in 36 appearances last season, more than any other Everton player
Odds correct as of 2020-11-05 16:15 Odds subject to change.

Next up I’m fancying Everton’s Dominic Calvert-Lewin to be carded at 9/2, available with both Betfair and bet365. Only Jordan Ayew of Crystal Palace committed more fouls in the Premier League than Dominic Calvert-Lewin who racked up 57 in total last season. The Everton front-man was cautioned on an impressive nine occasions in the league in 2019/20 which was the highest of anyone at Everton.

Calvert-Lewin managed those nine bookings from 36 appearances, an impressive strike rate and one that makes the 9/2 for him to pick up a card on Saturday look rather attractive. The England International was awarded his first card of the campaign at Southampton a couple of weeks ago and I think he should enjoy a good physical battle with Harry Maguire of Manchester United this weekend. William Hill and Sky Bet go 14/5 for a DCL booking so I’ve had a nibble on the 9/2 showing from Betfair.

Premier League Betting
Calvert-Lewin 2+ shots on target, Maguire & Allan to be carded
45/1
Calvert Lewin has landed two or more shots on target in six of his seven league games this season Harry Maguire has been booked twice in six league games this campaign and has also been sent off for England No Everton player has been booked more times than Allan this season who looks better priced than his counterparts
Odds correct as of 2020-11-05 16:20 Odds subject to change.

Moving onto my longshot for the game I’ve opted for Dominic Calvert-Lewin to have two or more shots on target, with both Harry Maguire and Allan to be carded at 45/1 with Paddy Power.

Spearheading this three-pronged punt is young Dominic Calvert-Lewin to have two or more shots on target. The Everton striker has been a breath of fresh air this season, with eight league goals to his name and registering at least two shots on target in six of his seven matches this campaign.

The first of two players I’m fancying to find their way into referee Paul Tierney’s notebook is Harry Maguire. It’s been a turbulent season for the centre-half who has picked up two yellow cards in six league games as well as being sent off for his country last month. I fancy him to have a battle with Calvert-Lewin and looks better priced than his counterparts to pick up his third of the season on Saturday.

Rounding off proceedings on Saturday lunchtime is Everton’s Brazilian midfielder Allan to pick up a card. No Everton player has been booked more times this season in the league for the Toffees than the former Napoli man. The 29-year-old is a bigger price in the market than both Andre Gomes and Abdoulaye Doucoure and he looks the right selection for this Same Game Multi.

Putting those three elements together pays 45/1 with Paddy Power. Good luck to anyone following this weekend’s plays and please remember to gamble responsibly.

What a signing this man is turning out to be! 🔥

James Rodríguez is on the scoresheet and Everton are flying! 💙 https://t.co/PdKI56Fwrs