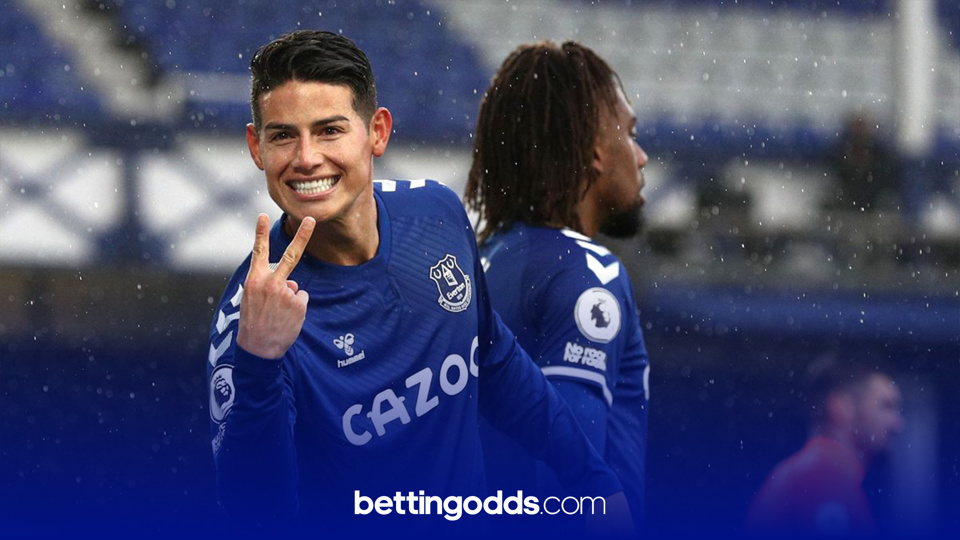 James Rodriguez has registered at least one shot on target in 10 of his 12 league starts for Everton and features in our 55/1 longshot
By Anthony Eadson
17:13 Tuesday 26th January 2021 - 5 minute read

Everton sit six points behind Leicester in the Premier League with the Toffees having two games in hand over the Foxes. The two sides meet at Goodison Park on Wednesday evening and we’ve got three football tips for the game from one of our best betting minds @AnthonyEadson.

Take out Everton’s home defeat to West Ham and they have taken 15 points from the last 18 available. Carlo Ancelott’s side are not the favourites for the three points here and as so can be backed at 9/5 for the win. The draw is available at 23/10 with a win for Leicester - which would see them have 41 points after 20 games - priced at 13/8.

Brendan Rodgers will be gutted to be without Jamie Vardy who will be out having minor surgery on a hernia issue. It is thought Vardy should be back in training at the end of next week though and Leicester’s injury list is shortening with Caglar Soyuncu and Ricardo Pereira now being fit for selection. Ayoze Perez may get the nod over Kelechi Ihenacho at the head of proceedings for the visitors.

Abdoulaye Doucoure will miss this fixture as the Frenchman serves a suspension for picking up five bookings. Lucas Digne should slot back in at left-back, while Allan and Fabien Delph will also miss out through injury.

Kicking things off on Wednesday evening is a boosted double from those good folk over at Paddy Power. I’ve opted for both Richarlison and James Maddison to have a shot on target at Goodison Park, which is available at the rather generous looking 5/2. Both these players were best priced with Paddy Power before the boost on each player to have a shot on target with Skybet going just 1/2 on Maddison to hit the target once.

This only gives me confidence that we are the right side of a value player and we have two players who have been known to rack up the numbers in front of goal. Richalrison hit the target three times against Sheffield Wednesday this weekend and has registered three or more shots on target in three of his last six home matches. Richarlison has the ability to cause any defence a problem and with 1.16 shots on target per 90 in the league this season, I’m happy to include him in the double.

James Maddison is a player who is hitting form at just the right time for Leicester and maybe even for England with the midfielder being tipped by some to make the Euro 2021 squad. With four goals in his last four games Maddison has helped his team earn some crucial points. The 24-year-old has registered 0.81 shots on target per 90 min this season and has landed one or more on target in six of his last eight for the Foxes. 5/2 looks an attractive, and for that reason I’m recommending a two point play.

Mike Dean will be the official in charge of Wednesday evening’s game that can be seen live on BT Sport 2, kicking off at 8:15pm. Never far from the spotlight, Mike Dean is one of the best top flight referees when it comes to being card-happy. The Tranmere fan currently ranks 4th of 19 officials this season for yellows per game shown (3.58). Dean also came second to only Stuart Attwell last season for seeing yellow with an even higher average of 4.15 per game.

Mason Holgate is the player I’ve got on my radar to find his way into Mike Dean’s notebook, with the youngster currently best priced at 7/2 with bet365. In the 2018/2019 season, Holgate picked up six yellows in 21 for West Brom, he then followed that up with five in 27 for Everton last season but has already had three in just eight games this campaign. No stranger to a cynical foul, there’s also a chance that Holgate could line up in midfield after Carlo Ancelotti said he was open to playing him there in the absence of Allan and Abdoulaye Doucoure, at the expense of Tom Davies. If Holgate did start in midfield I would say this only bolsters our chances of him picking up his fourth cards of the season against Leicester.

I do think this game has potential to be an entertaining watch with two good sides on display and I’ve also picked out a 55/1 longshot to accompany the two selections above. I’ve opted for James Rodriguez to have at least one shot on target, with both Youri Tielemans and Dominic Calvert-Lewin to be carded.

James Rodriguez started the season in good form and when it comes to shots on target, the Colombian has registered 1.04 per 90 minutes in the league. With 1+ shot on target landing in 10 of his 12 starts in the league I’m finding it hard to keep away from the 10/11 showing as a single here from Paddy Power. As a result he’s the first name into this Bet Builder and I’m fancying him to have a shot on target as part of this three pronged-punt.

Youri Tielemans has picked up three of his four yellow cards in the league this season away from the King Power Stadium. The central midfielder has picked up four cautions in the league with no side actually having collected more than Leicester. With Mike Dean in charge, this game looks primed for Tielemans to pick up his fifth of the season.

Dominic Calvert-Lewin was Everton’s most booked player last season with an impressive haul of nine yellow cards. The robust frontman who is not frightened to give defenders a bit back, has three bookings to his name this term and is much better priced with Paddy Power than many of his counterparts in a game that should have plenty of cards from Mike Dean.

Best of luck to anyone following on Wednesday evening. Please always remember to gamble responsibly and use the tools available from the bookmakers or required sources should you feel the need to.

get offer get offer
#Ad. Place your FIRST bet on any Sportsbook market and if it loses we will refund your stake in CASH. Max refund for this offer is £10. Only deposits made using Cards or Paypal will qualify for this promotion. T&Cs apply. Paddy's Rewards Club: Get a £10 free bet when you place 5x bets of £10+. T&Cs apply. 18+ begambleaware.org
Free Betting Offers