Patrick Bamford has registered at least two shots on target in five of his last seven games and features in our 7/4 selection
By Anthony Eadson
12:33 Friday 27th November 2020 - 6 minute read

Everton face Leeds United in the Premier League on Saturday in what on paper looks to be a high scoring affair. Leeds have scored in every away game this term and Everton have failed to keep a clean sheet since the opening day of the season. @AnthonyEadson gives us three football tips for the game that he thinks should go close.

Everton have been dealt an injury blow after Lucas Digne was ruled out for up to two months through injury this week. Carlo Ancelotti could well keep the 3-4-3 formation he deployed against Fulham with Alexi Iwobi and Jonjo Kenny on the wings. Mason Holgate is pushing for a recall to the side but Seamus Coleman looks set to miss out once again as he recovers from a knock.

Pablo Hernandez, Jamie Shackleton and Diego Llorente are all sidelined for Marcelo Bielsa’s side with forward Rodrigo having to settle for a spot on the substitutes bench after lacking match fitness since contracting Covid-19. Kalvin Phillips should start again after coming back into the side against Arsenal last week, helping his side keep a clean sheet.

The bookmakers have made Everton the even money favourites to win the game (1/1). The draw is available to be backed at 11/4 with a win for Leeds United priced at 13/5, an implied probability of 28%.

Everton v Leeds
Patrick Bamford 2+ shots on target
7/4
Seven goals in nine league games this season Bamford has registered at least one shot on target in all nine Premier League matches this season Two or more shots on target has landed in five of his last seven!
Odds correct as of 2020-11-27 12:10 Odds subject to change.

I think this could well be the game of the weekend in the Premier League and my first selection on Saturday comes in the form of Patrick Bamford to have two or more shots on target, priced at 7/4 with betfair. Few would have guessed that after nine games of the new season, Leeds United’s Patrick Bamford would have scored seven league goals.

The 27-year-old has been superb in the first quarter of this new campaign and when it comes to shots on target, Bamford ranks second in the league, with only Dominic Calvert-Lewin with more this season. In all nine of his league appearances this term, Bamford has registered at least one shot on target, with two or more landing in five of his last seven. I’m expecting Bielsa’s side to take the game to Everton and with stats like that and Bamford leading the line, I’ll be having a play on 2+ shots on target for the striker, at 7/4.

James Rodriguez to score from outside the box
14/1
Everton's switch to 3-4-3 allows Rodriguez can stay higher up the pitch and track back less Free-kick taker and Chris Kavanagh is in charge who ranks third of nineteen Prem refs this season for fouls per game (26pg) 50% of Rodriguez's shots have come from outside the area this season
Odds correct as of 2020-11-27 12:15 Odds subject to change.

The second selection I’ve opted for is Colombian James Rodriguez to score from outside the box, at 14/1, again with betfair. James Rodriguez’s first nine games have brought everything we expected from the superstar, from the sublime, to the South American shithousery that often comes along with players from that continent and how they can be a little ‘crafty’ on the pitch.

I’ve been impressed on the whole and one tweak manager Carlo Ancelotti made last weekend was moving to a 3-4-3 formation. This allowed Rodriguez to stay higher up the pitch and do less tracking back which had been an issue in previous games. With more time in the final third of the pitch I think we could see a good amount of shots from long range which could also come in the form of a free-kick.

Chris Kavanagh is the man in the middle for this one and of the 19 officials to take control of Premier League games so far this season, he ranks third for fouls per game with 26 on average per 90 mins. 50% of James Rodriguez’s shots this season have come from outside from the box and with Lucas Digne out injured, there is no doubt who will be on set-piece duty from just outside the area for the Toffees. I’ve seen this a lot shorter over recent weeks with Kavanagh in charge, I'm willing to have a dabble on the 14/1 on offer from betfair.

Premier League Betting
Richarlison & Dallas 1+ shot on target, Allan & Phillips to be carded
55/1
Richarlison has registered five shots on target in six games this season and makes more appeal than Calvert-Lewin considering the prices Stuart Dallas is playing in a more advanced position in midfield and has registered one or more shots on target in five of his last seven  Allan has been booked three times in eight games this season and has committed eight more fouls than anyone at Everton Kalvin Phillips has 34 league yellow cards since the start of the 2017/18 season and has three in six appearances this term
Odds correct as of 2020-11-27 12:15 Odds subject to change.

It’s been Dominic Calvert-Lewin that has been grabbing the headlines in front of goal for the Toffees but at 1/10 I cannot touch him in this market. Richarlison makes more appeal here averaging just under a shot on target per game with five in six matches and is the first name in this Same Game Multi.

Stuart Dallas took up a more advanced position in midfield against Arsenal and I expect the same against Everton. The regular left-back has recorded at least one shot on target in five of his last seven league games and playing higher up the field only makes him more likely to add to his tally in my opinion.

The first of two players to be carded is Everton’s Brazilian midfielder Allan, who has committed seven more fouls than any other player in Ancelotti’s squad this season. Described by Martin Keown on the BBC last week as ‘a real tiger in the middle of the park’, Allan certainly puts himself about a bit. The 29 year-old has three cautions in eight games this season and it would be no surprise to see him pick up another against Leeds.

Rounding off this four-pronged punt is Kalvin Phillips to pick up a card. After missing a few games with a shoulder injury Phillips returned against Arsenal and helped his side to keep a clean sheet. The 24-year-old picked up a booking in that game which now takes him onto three already from six games this season. Since the start of the 2017/2018 campaign, Phillips has been booked an impressive 34 times in the league.

Best of luck to any of those who are following the selections on Saturday. Enjoy the game, which looks set to be a cracker, please always gamble responsibly. 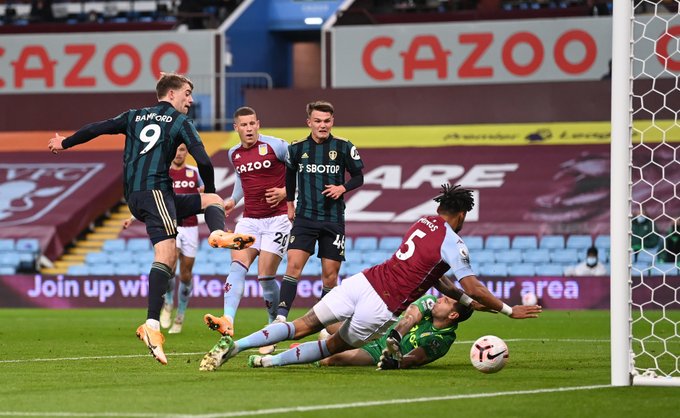 Patrick Bamford is only the second ever player to score in Leeds' first three away games of a top flight season, and the first since Gordon Hodgson in 1937-38... 🔥