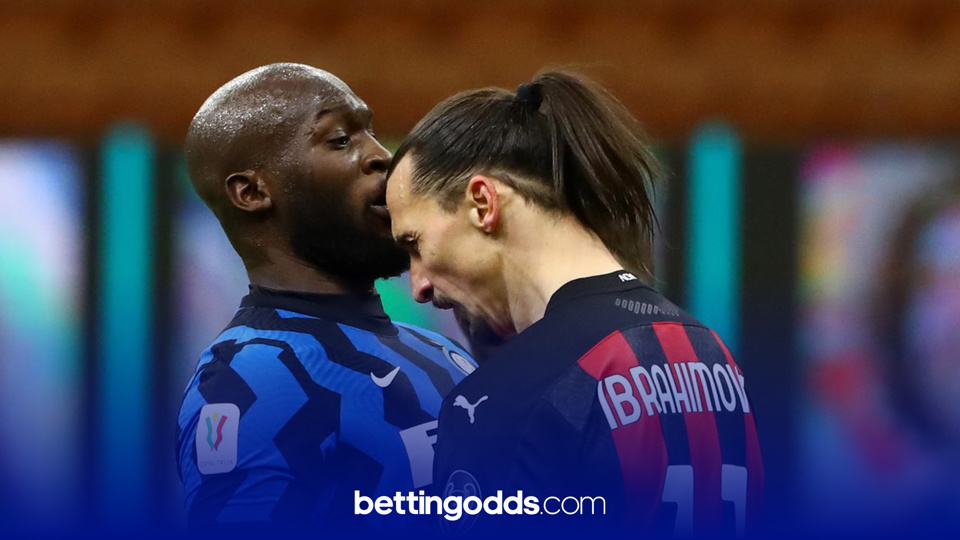 European Football Tips: Lukaku and Ibrahimovic fancied to be in the action
By JimmyThePunt
20:34 Friday 19th February 2021 - 4 minute read

First on the agenda is the 158th Revierderby on Saturday in the Bundesliga as Schalke welcome Borussia Dortmund. The visitors got some much needed respite from their dismal domestic run in the form of a Champions League win on Wednesday as they emerged 2-3 victors in Sevilla. As alluded to though, prior to that BVB had only won one of their last six games in the league and currently lie in sixth place. Edin Terzić will be hoping to maintain the standards they sent midweek and rediscover their domestic form tomorrow when they face basement boys Schalke. The bookies certainly fancy them, at around 29/100 their expected chance of victory is 78%.

My next tip comes via another derby as AC Milan lock horns with Inter in Serie A on Sunday afternoon in the 174th Milan Derby. This bout pits first vs second as the two Milan teams sit at the summit of the table. A victory for Inter would steer them four points clear of their closest rivals whilst a Milan victory would see them leapfrog their opponents and move into pole position.

My final selection from the continent comes courtesy of Ligue One’s Le Classico as PSG play Monaco on Sunday evening. The Parc des Princes awaits as second meets fourth and the hosts will be brimming with confidence following their 4-1 thrashing of Barca at the Camp Nou on Wednesday. Mauricio Pochettino will have to make do without big hitters Angel Di Maria and Neymar- both ruled out with injuries- but with Mbappe bagging a hat-trick in midweek and Kean also amongst the goals he has two players more than capable of filling the void. Les Monégasques, on the other hand, will be looking to bounce back from a disappointing draw vs Lorient, Alleksandr Golovin was rested in that game but should start here.

Since joining Schalke in January, Sead Kolasinac has been carded once. You have to fear for him against a Dortmund attacking quartet that will feature the likes of Jadon Sancho, Erling Haaland and Giovanni Reyna. The latter is BVB’s most fouled player, drawing an average of 1.9 per game in the Bundesliga this season. Dortmund reminded us just how deadly they can be on the counter in their UCL victory on Wednesday and I fear that Kolasinac could be a disaster waiting to happen in transition.

In the last six head to heads between these sides have seen a total of 37 cards brandished, nine of which came when they last met in the Coppa Italia. On that day both Romelu Lukaku and Zlatan Ibrahimovic scored and were carded and for this weekend's long-shot I am hoping lightning strikes twice!

With 16 goals, Lukaku currently tops the Capocannoniere charts. He has found the net four times in his last three games and has an average xG per 90 of 0.81. He also has four cards to his name, the most recent addition coming in his most recent appearance vs Lazio.

Ibrahimovic is two goals off the pace- in terms of leading goalscorers in Serie A- with 14 goals, however, he has played significantly less games then Lukaku. He does seem to love the Milan Derby, he has bagged three and received two bookings and a red card in the two games he has played this season!

Whilst this angle does have legs it has more to do with the narrative. Obviously, there is a lot of bad blood between these two players from when they last met. Their standoff also appears to have some cultural importance, so much so that it has been made into a Muriel.

With three yellows and one red card to his name this campaign, I think Layvin Kurzawa has been consistently overpriced recently. The French full back conceded the penalty midweek, along with another four fouls, yet somehow avoided a booking.

In terms of defensive output his figures are consistently high as he averages 1.5 tackles, 1.3 interceptions and 1.7 fouls per game in Ligue One this season, however, it is worth noting that in the games he has started his fouls per game average rises to 2.2.