Euro 2021 Betting: Three players to be carded this weekend in 213/1 trixie 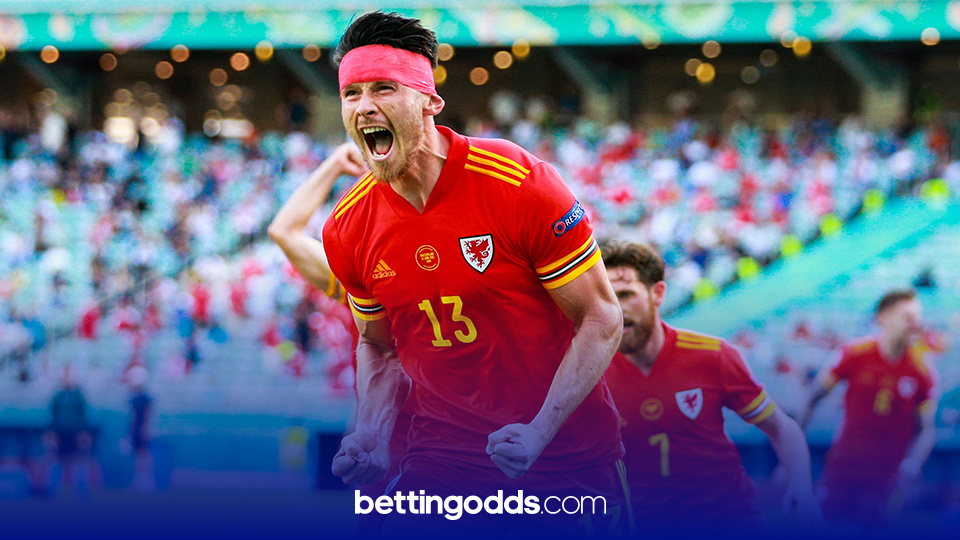 Kieffer Moore features in our tips to be carded this weekend
By Anthony Eadson
12:56 Friday 25th June 2021 - 4 minute read

It may be rather disappointing that 71% of the matches at this summer's European Championships have now been played, but on the plus side this weekend sees the start of the Round of 16 and the knockout phase.

There’s two games taking place on Saturday with Wales taking on Denmark in Amsterdam at 5pm, before Italy face Austria at Wembley. Sunday pits the Netherlands against the Czech Republic at 5pm, before Belgium take on Portugal in what looks like the pick of this weekend’s matches.

We’ll have tips available for every remaining game at Euro 2021 here at BettingOdds.com and our man @AnthonyEadson has provided us with three card plays he likes the look of for this weekend. Combined as a treble the selections pay best with bet365 at 213/1, although we’d be advising a trixie where we’ll make a healthy profit if two of the three players are carded.

Wales have exceeded expectations by qualifying for the knockout stage for the tournament for the second time in a row after remarkably reaching the semi-finals in 2016. A point against Switzerland and a win over Turkey was enough for Rob Page’s side to earn a tie with Denmark in the round of 16.

Kieffer Moore is the player I’m touting to pick up a booking against Denmark. The Cardiff striker was only booked four times in the Championship for Cardiff last season but has a much better record of being shown a yellow card for his country.

In 2020 Moore appeared five times for Wales in the Nations League, with two of those being as a substitute. The 28-year-old was booked on three of those five appearances and was also shown a yellow in his first game at this tournament against Switzerland. Quotes of 5/1 on Moore being carded look appealing with Betfair taking a much more cautious approach at 13/5.

The second game on Saturday sees Italy take on Austria with Roberto Mancini’s men expected to advance to the quarter-finals after a faultless group campaign, which saw them become the first side in European Championship history to win all three group games without conceding a goal.

The bookmakers have Italy at just 2/7 to progress to the next round, but the player I’m leaning towards to pick up a booking is Chelsea’s Jorginho, who can be backed at around 11/2 with most firms including bet365.

The defensive midfielder has a superb record of being carded, picking up 62 yellows in 304 appearances since the 2013/2014 season. The Italian was booked four times in 12 matches in Chelsea’s most recent Champions League campaign and picked up 10 in the Premier League in 31 matches in the 2019/2020 season.

Anthony Taylor will be taking charge of the game who in my opinion is one of the better referees when it comes to dishing out the cards. Taylor brandished 20 yellows in four Champions League games last season and gave out seven on his one appearance in the Europa League.

The Netherlands take on the Czech Republic in Budapest on Sunday. Despite a narrow defeat to England, a win against Scotland and a point against Croatia was enough to see the Czech’s through the Group phase as one of the best third-placed finishers.

Rounding off this trio of players to be carded over the weekend is Tomas Soucek who enjoyed a successful campaign with West Ham in his first full season in England. The 26-year-old picked up more yellow cards than any other member of the Hammers squad last term with seven cautions in the Premier League.

Soucek’s average of 1.8 fouls per game in the league was also by far the highest at West Ham with only four players in the entire division possessing a higher foul rate per game. Paddy Power have Soucek priced at just 11/5 to be carded on Sunday so I’d be recommending taking the much better option of 9/2 from bet365.

It will be profit for those playing the singles if any of the three players find their way into the book, although as mentioned earlier, I’ll be playing the trixie, with the treble paying 213/1. Best of luck to those following and please always gamble responsibly.