Over the years Ajax have become well accustomed to losing their young starlets to the European big guns, but now the club could face a fight to hold onto their manager, Erik ten Hag, who continues to blossom in Amsterdam.

The Dutchman has, of course, already been linked with high-profile jobs. He's been tentatively touted as the future boss of both Bayern Munich and Barcelona, while back in the summer he shut down rumours of a switch to Tottenham when he committed himself to current club Ajax in the form of a brand new contract through to 2023.

"I'm busy with where I am at, that's at Ajax, that's where my head and heart are at," he said after putting pen to paper.

The 51-year-old has so far resisted the lure of changing managerial chapters, but the spotlight continues to shine on his undoubted credentials following a superb start to the season, both domestically and in Europe: Ajax are hunting for their third Eredivisie under Ten Hag and are flourishing once again in the Champions League.

Ten Hag is on a trajectory towards becoming one of Europe's most sought-after managers, meaning his loyalty to Ajax is sure to be tested again in the near future.

Below we look at his achievements at Ajax, his managerial strengths, style and influences, and where we could see him employed later down the line…

Appointed in December 2017, Teg Hag would go on to enjoy a memorable first full season in charge as he led his talented, young Ajax side to the 2018/19 Eredivisie title and KNVB Cup glory - the club's first double since 2002 - while in Europe they stunned defending champions Real Madrid and Juventus en-route to the Champions League semi-final.

Ten Hag’s side won the Johan Cruyff Shield, then were top of the table when the 2019/20 season was cancelled due to Covid-19. However, he retained the title in 2020/21 and added another KNVB Cup to the cabinet.

Prior to Ajax, Ten Hag coached at FC Twente’s youth sides, then became an assistant at senior level - where he worked with title-winning manager Steve McClaren - before moving into management at the helm of a young Go Ahead Eagles side whom he propelled into the Eredivisie in his one and only season.

He then ventured over to Germany with Bayern Munich II where he linked up with Pep Guardiola - more on that in a bit - and then secured back-to-back top-five finishes back in Holland with Utrecht where he won the first of his Rinus Michels Award, which is handed to the Eredivisie Manager of the Year.

The club’s incredible 2018/19 side featured an exciting crop of players, including Matthijs de Ligt, Frenkie de Jong, Hakim Ziyech, and Donny van de Beek who have all since been gobbled up by Europe’s elite for a combined £225m. Sergiño Dest and Kasper Dolberg have been sold on too.

Golden Boy contenders Ryan Gravenberch and Jurriën Timber, plus Antony and Devyne Rensch, are amongst the club’s current roster of stars in Ten Hag’s Ajax 2.0.

But while he excels working with young players, through his man-management style and tactical nous Ten Hag has also successfully resurrected the careers of Dusan Tadic, Daley Blind, and most recently former West Ham striker Sébastien Haller who is enjoying an incredibly goal-drenched season so far…

The whole of the country will be behind the Three Lions on Saturday evening and after a 7/1 winner on Tuesday, Tipster Wizard returns with his best bets for England vs France.

Ten Hag’s done a fantastic job in Amsterdam where he has accrued 132 wins from 180 games, complete with an eye-popping 491 goals scored, just nine shy of the landmark 500.

Ajax have been a joy to watch through their fluid play, mobility, circulation of the ball, and intricate passing combinations. The manager gets his players to express themselves on the pitch, to showcase flair and to be fearless: highlighted in the stunning 4-0 demolition of Borussia Dortmund in the Champions League.

Learning from the best

“Erik [ten Hag] is rightly regarded as one of the most exciting coaching talents in world football at the moment because of the work he does with Ajax,” Jurgen Klopp said in December 2020.

At Ajax, Ten Hag's style of play has drawn comparisons to Pep Guardiola, which isn’t a huge surprise given that the duo worked together at Bayern Munich.

“I learned a lot from Guardiola,” Ten Hag previously said in February 2019. “His philosophy is sensational, what he did in Barcelona, Bayern and now with Manchester City, that attacking and attractive style sees him win a lot.

“It’s this structure that I’ve tried to implement with Ajax.” 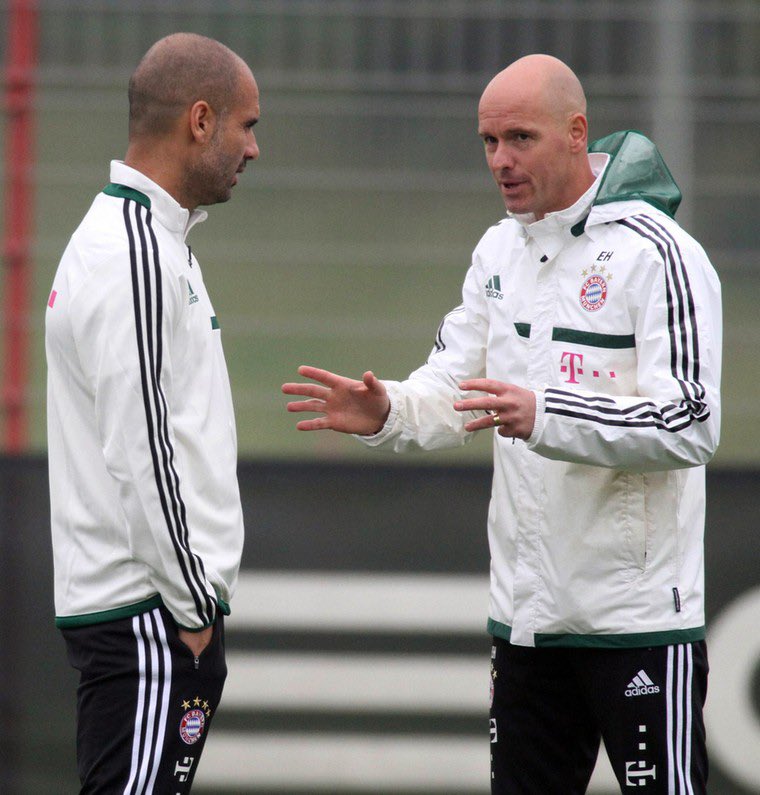 Ten Hag works at a club that frequently lose their best players but are still expected to win most games. It’s a high-pressure job but one he’s thrived in, as he continues to re-build title-winning teams who can challenge in Europe, while staying true to his and the club’s high-tempo and possession-based values.

Once Ten Hag feels the time is right to move on he’ll have no shortage of suitors.

Man Utd would be a step up in expectation, profile, and pressure. It's a job that will always attract the biggest names and brightest coaches.

Further down the line, if the timing is right he could be a future option for Liverpool when Jurgen Klopp leaves, or when Pep Guardiola departs Man City.