The Scot’s CV boasts a whopping five promotions with Fleetwood Town (two), Shrewsbury Town and Tranmere Rovers (two), each of which have been won over the course of the last decade. In fact, in eight full seasons between 2010 and 2019 English football’s best-named boss has remarkably carded five top-two standings, and only finished outside of the top-six once: 2nd, 5th, 1st, 2nd, 20th, 2nd, 2nd, and 6th.

Throughout this time Mellon has carved out a reputation as a flexible manager who is not afraid to mix things up and implement different styles of play when he deems necessary. “If we are able to play the football I want to play and get results, then that’s what we’ll do,” he told The Telegraph in 2018. “Ultimately, though, I’ll do what I have to do to get results.”

The adaptable and determined boss gets the best out of his players, gives youth players the chance to thrive, and at Tranmere he’s reinvigorated a club following a dark period in their history; bridging the gap between club and the Rovers fans, bringing success, and implementing a recognisable style of play.

Mellon began the decade in charge of Fleetwood Town. History had been made in January 2009 when he was appointed as the club’s first ever permanent manager in what was his maiden managerial role - within 18 months he’d led the club into the Conference. The following season his troops fell short in the play-offs but, fuelled by the signing of goal-machine Jamie Vardy, the Cod Army roared to the Conference title with a gargantuan 103 points, recording a 29-game unbeaten run en route.

Vardy was lured to Leicester City, but in their first season in the Football League Fleetwood enjoyed an impressive start, occupying 7th spot in early December, which is why the club’s abrupt decision to part ways with Mellon came as quite the shock.

Mellon waited 18 months until he opted to return to management with Shrewsbury in May 2014, having spent his time in between posts at Barnsley, as an assistant manager to David Flitcroft then Danny Wilson.

Back in League Two, Mellon undoubtedly felt that he had unfinished business, and after a summer shake-up during which he made 16 signings, Mellon’s men enjoyed an instant return to League One, sealing promotion with the division’s meanest defence. They even stunned Premier League Leicester in the League Cup, and nearly shocked Jose Mourinho’s Chelsea in the last-16 - they lost 2-1 late on - who would go on to complete the league and cup double.

The Shrews enjoyed another memorable cup run in Mellon’s second season, shooting through to the FA Cup fifth round for the first time in 25 years, where they would lose to eventual champions Man Utd. Safety was secured with a game to spare, but in October of his third season Mellon made the surprise decision to leave the League One outfit in order to dive two steps down the league ladder to Tranmere, of the Conference - he departed New Meadow with a win rate of 42.8%, which remains the highest of any Shrewsbury manager. 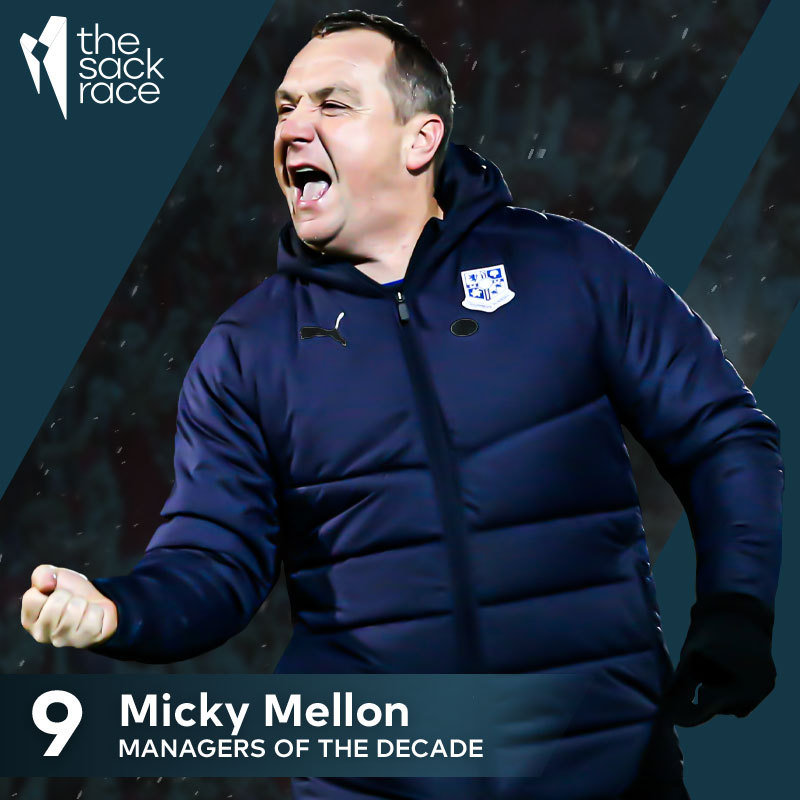 At the time, Tranmere Rovers chairman Mark Palios said: "Micky already has a number of promotions to his name and we are confident he will add to that record once more at Prenton Park,” and that he did, as the former Rovers player, who would suffer play-off final heartbreak at the end of his first season, proceeded to lead the club to back-to-back promotions from the National League to League One.

Mellon’s pure elation at winning promotion to the Football League for a second time resulted in one of the most memorable manager celebrations in recent times; the unbridled joy and relief at orchestrating the victory despite his men going down to 10 men after just 48 seconds. Just ask Mike Dean.

Mellon will now be tasked with making the managerial step up to Championship level, but first he’ll need to establish himself in League One, having only ever overseen one full season in the division. While his promotions have been won at a lower level, his impact and success at three different clubs in a short period of time means Mellon fully deserves his place at No.9 in our list of English football’s ‘Managers of the Decade’.