Back in 2010 Danny, the elder Cowley, was managing his brother at Concord Rangers in the Isthmian League Division North, the eighth-tier of English football. Fast-forward to the end of 2019 and the brothers  - who officially teamed up in 2014 - have negotiated their way up the league ladder into the Championship with Huddersfield Town. It’s remarkable to think that they only entered into football management full-time in 2016 after their move to Lincoln meant that they had to give up their teaching jobs.

“For Nicky and I it’s been a fairytale,” revealed Danny after they made the switch to Huddersfield in September 2019. “You have to believe in football miracles.”

In the backend of the previous decade Danny led Concord Rangers to the Essex Senior League (ninth tier) title in his debut managerial season (2007/08) - a post he juggled with his full-time job as a PE teacher. He experienced Isthmian League Division North play-off final heartache in 2008/09, but brushed that disappointment aside by winning the 2009/10 play-off final, securing his second promotion, and the first of four promotions over the course of the next 10 years.

Concord sealed promotion to the Conference South in 2012/13 when they also won the Isthmian League Cup. In the subsequent two seasons Danny won back-to-back Essex Senior Cups, before jumping up a division to take charge of Braintree Town in 2015. In eight seasons at Concord he'd won three promotions, three cups, and only once finished outside of the top-half of the table (14th). “We felt we’d gone as far as we could with Concord,” said Nicky, who by this point had joined his brother in the dugout. 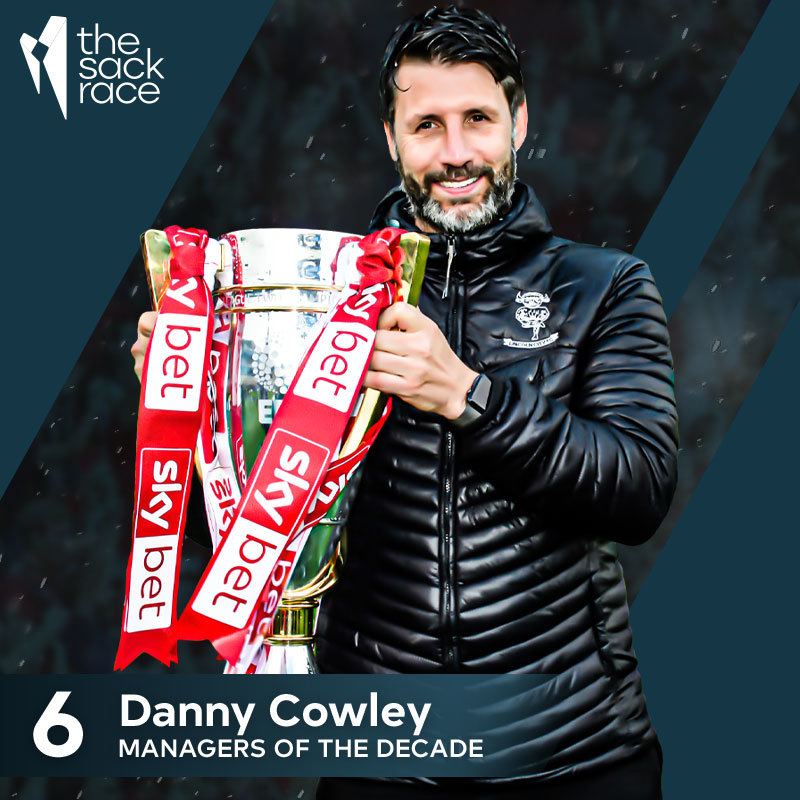 What followed was a solitary yet pretty successful year at part-time Braintree Town, with whom the Cowley’s led to 3rd in the full-time Isthmian League Premier - the club’s highest-ever league finish - but lost in the play-offs. However, the Cowley’s caught the attention of Lincoln City, a club that had been rooted in the National League for four seasons having spent the previous 24 years in the Football League.

“They are archetypal of the forward thinking, energetic and ambitious young managers we sought to attract from the outset and I sincerely believe they will be successful here at Lincoln City Football Club for a long time to come,” beamed the club’s Chairman Bob Dorrian, although even he couldn’t have predicted the stunning scenes that followed.

The Cowley’s instantly sprinkled their managerial magic at Sincil Bank, as the club cannonballed from non-league to the League One play-off places in just over three years; during which they won the National League and League Two titles, and tasted EFL Trophy glory at Wembley.

And let’s not forget that in their first season the Cowley's became the first non-league managers in 103 years to lead a side through to the FA Cup quarter-finals after dumping out Sean Dyche’s Premier League Burnley, and a couple of Championship sides. Lincoln then faced Arsenal at the Emirates, and bravely held on for 45 minutes, before succumbing to Arsene Wenger’s men.

During their time at Lincoln, the Cowley’s were constantly linked with a move away, a switch which would materialise in September 2019. “So why leave, you ask? Nicky and I have a burning ambition to challenge ourselves at the highest possible level,” revealed Danny. "We don’t know if an opportunity as good as this one will come around again and we never want to live with regret.”

The Cowley’s arrived at a confidence-crushed and recently relegated Huddersfield side who had won only one match in the last 11 months, with only a single point from a possible 18 this season. In the space of two-and-a-half-months the brothers have completely rejuvenated the club. Their current tally of six wins (23 points) from 17 games is more than the club had recorded in their previous 59 matches (five wins).

So why are they so good?

“Teaching is just teaching - that to me is the skill,’ Cowley told The Daily Mail. "It’s your pedagogical skills that allow you to be able to impart the information and grab the attention of people and create curiosity and create interest in peoples’ thought processes and then when you get that alignment all the hard work should be there to see on the pitch.”

There are occasions when you question whether certain managers are fully  committed to a club. Do they have a connection with the fans? Is their heart really in it?

This certainly can’t be said about the Cowley brothers. They are personable, and deeply determined. They drench themselves in their new surroundings, instilling a togetherness with the fans, the players and the community as a whole. They radiate positivity and passion, have buckets of enthusiasm, and have developed strong man-management and motivational skills.

They back this all up with incredible success in the form of their rapid rise up the league ladder during which they’ve attained four promotions, two league titles, and four cups. Furthermore, they have finished inside the top-10 in nine of their 10 seasons this decade.

There’s been a swift turnaround in fortune at Huddersfield, yet there’s a strong belief that this is not just a mere manager bounce, but the foundations have been laid for a successful future. Staying up remains the main target but in such an unpredictable division, who knows, the Cowley’s may even mount a push towards the play-offs.

There’s no limit to their ambition, afterall "Impossible is just an opinion."