While there’s no getting past the fact that Eddie Howe has endured a difficult end to the year, the very point of our 'Managers of the Decade' series is assessing managers on their performances over the duration of the last 10 years, not the last 10 games. So with that in mind, Howe fully deserves his spot in the top-three.

Howe may have ended the previous decade with games against the likes of Cheltenham and Torquay, but in the backend of 2019 he conjured up a win over Chelsea at Stamford Bridge, highlighting just how far he's come.

Howe is one of only a select group of managers to lead a club from the lower echelons of League Two up into the glitz and glamour of the Premier League - that’s three promotions in five seasons - where he has since remained for the subsequent five years, and even orchestrated a 9th-place finish; the highest in Bournemouth’s history.

Howe had spent the latter stages of the previous decade preserving Bournemouth’s Football League status - aka ‘The Great Escape’ - achieved in defiance of 17-point deduction, delayed salaries and the threat of liquidation.

It was his first job in management and he was the youngest of the 92 gaffers in English football’s top-four tiers, yet while some novices may have buckled under the pressure, the Englishman negotiated the learning curve somewhat admirably.

Before 2009 slammed its doors shut, Howe had turned down an offer from Peterborough, which proved to be a wise decision as come April 2010 he’d inspired his beloved Bournemouth to promotion out of League Two, despite being hindered by a transfer embargo.

After swatting away more managerial offers, Howe was eventually lured up to the Championship by Burnley in early 2011, only to return to the Cherries less than two years later. He instantly won the League One manager of the month award and come the end of the season he’d bagged a second promotion with the south coast club.

A very respectable 10th-place finish followed, then at the second time of asking Howe proceeded to conjure up Bournemouth’s first ever promotion into the Premier League after his side won the Championship title in dramatic fashion - they piped Watford by a point on the final day - a feat which saw the young English manager crowned the LMA Manager of the Year ahead of Jose Mourinho.

In the process he became the fifth manager from outside the top-flight to win the award - only a few weeks earlier he’d been recognised as the Football League’s Manager of the Decade (2005-2015) after only six years in management. 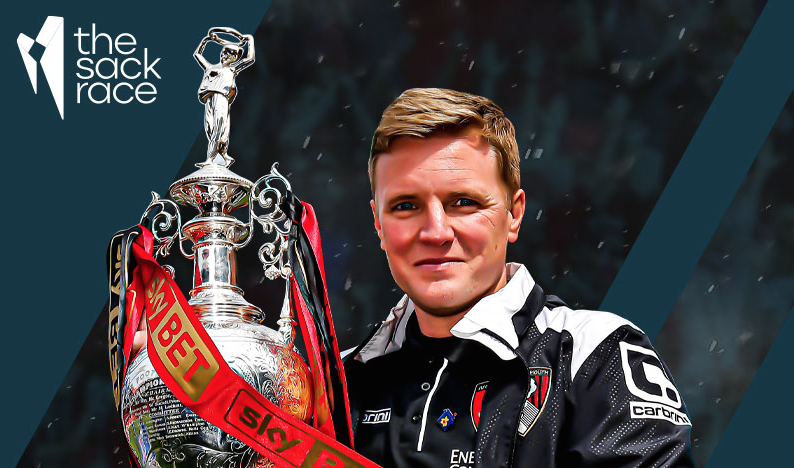 Fast-forward four-and-a-half-years and Howe has transformed Bournemouth into an established top-flight side, who employ an entertaining brand of football, and over the years have beaten the likes of Man Utd, Liverpool, Arsenal, Tottenham and Chelsea, with managerial maestros such as Jurgen Klopp, Mauricio Pochettino and Arsene Wenger outwitted by the young Englishman.

Howe’s strengths are his workrate, energy and appetite to improve and evolve. "I have a burning desire to achieve and that leads to a high amount of work,” he previously told BBC Sport.

“I am committed to the job and I will try and do anything I can to affect results, however much work that takes. I think I am addicted to the game. I think you have to be, with the volume of games you are watching and the amount of interest you have to have. You have to love the game.”

“They have fought, they have gone again and they have challenged themselves,” revealed Howe. “And that's why they more than anyone are a shining example of what you can achieve with hard work and discipline.”

Howe is still only 42 but already has in excess of 500 games under his belt, while he’s been the Premier League’s longest-serving manager for over 18 months.

He’s often linked with a move away, and has even been touted for the top position at Man Utd and Arsenal - at the time of writing he’s one of the favourites for the West Ham job - but as of yet this has not come to fruition, mainly because Howe appears perfectly content managing the team he loves, in the location he loves the most.

It really has been an incredible journey over the last 10 years complete with a jukebox of memories and emotions, and it’s a partnership Bournemouth fans will hope continues to break boundaries and enter new uncharted waters as they venture into 2020.