EFL Championship: The top-ranked players per 90 from last season 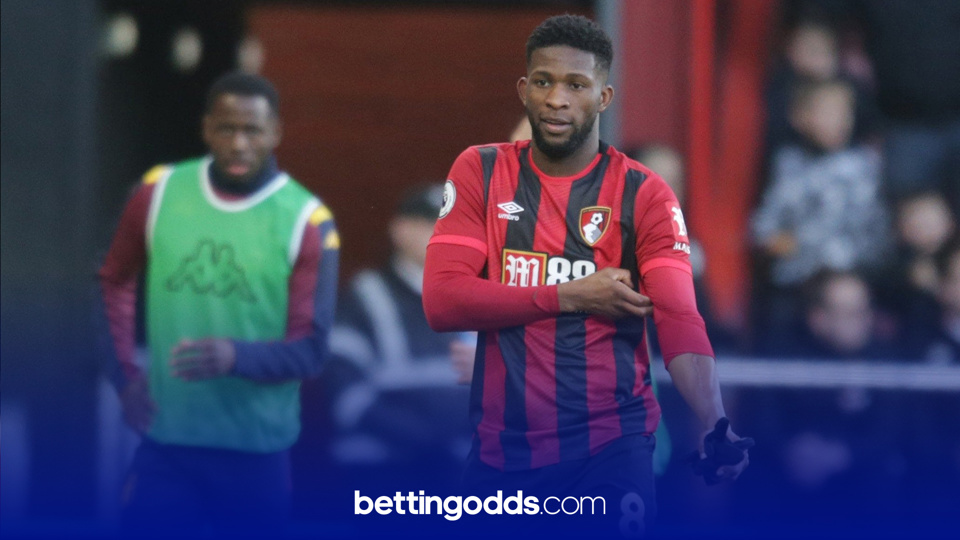 The EFL Championship kicks off on August 6th and ahead of the new campaign starting we’ve taken a look at some of the standout stats from last season’s edition of the second-tier.

We’ve assessed four key betting metrics - Shots, Shots on Target, Fouls and Cards - to see which players ranked highest for each category during 20/21. A number of the highest-ranked players from last season have either been promoted to the Premier League, or departed the Championship for another division, so we have only included players who will be present in the league this coming campaign. 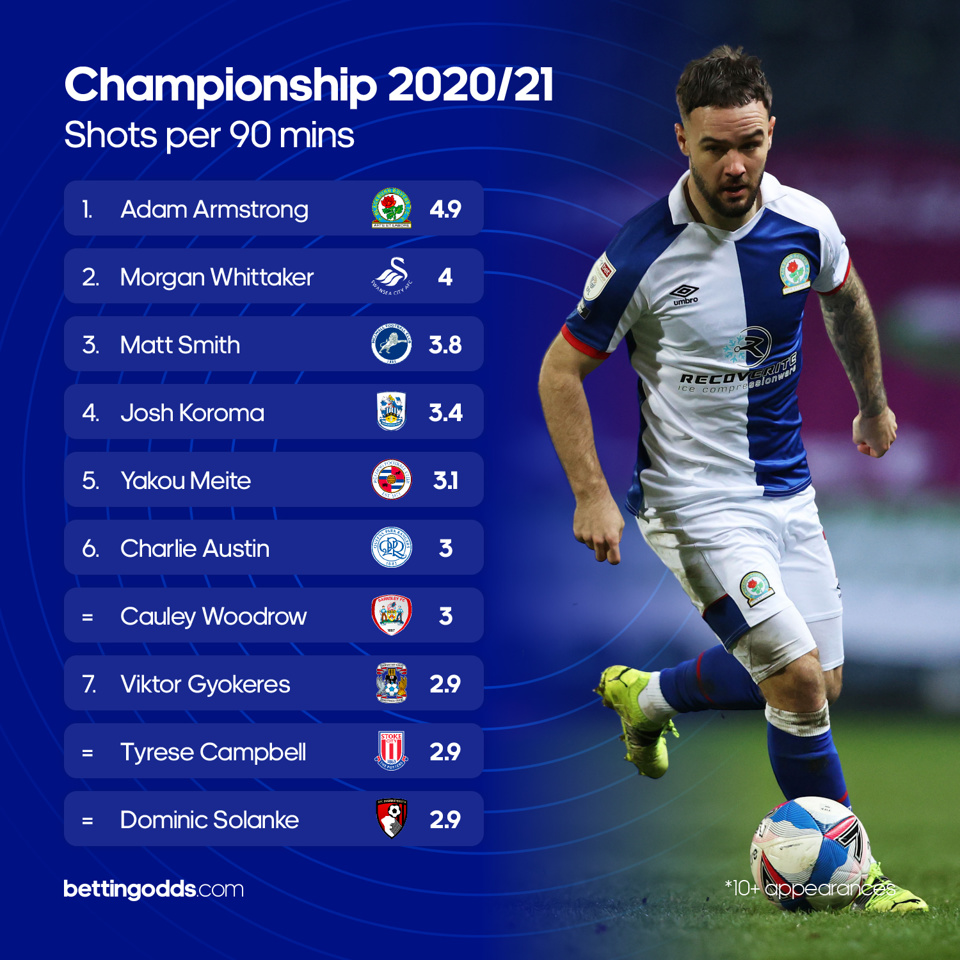 Blackburn striker Adam Armstrong is attracting strong interest from Premier League suitors following a tremendous campaign last season. Southampton are heavily linked with the 24-year-old, but a move will likely depend on whether Danny Ings departs the club during the summer window.

Should Blackburn retain their prized asset, he is certainly a player to watch in the shots market this season. Last term he averaged a whopping 4.9 per 90 minutes, scoring a total of 28 league goals for the Lancashire side. Elsewhere, Swansea’s Morgan Whittaker averaged 4 shots per 90, while Millwall target man Matt Smith finished the season with an impressive average of 3.8 per 90.

Charlie Austin only joined QPR on loan in January - a move since made permanent by the west London club - but averaged 3 shots per 90 (8 goals) in just 21 appearances, so he is another player that will likely continue to show his positivity in the final-third during 21/22. 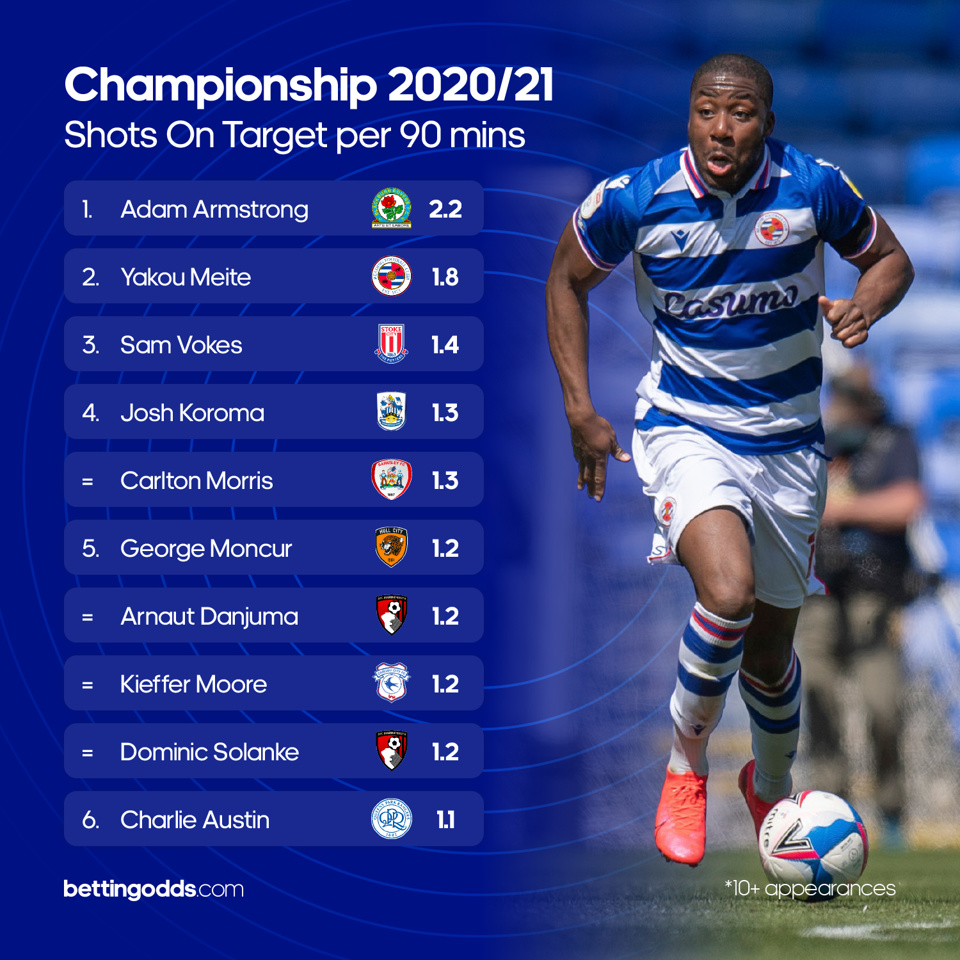 Armstrong also topped the list for Shots on Target per 90 minutes with 2.2. The former Newcastle man ended the season as the league’s second-highest goalscorer with 28 - five goals behind Ivan Toney - but actually scored more goals per minute than the Brentford striker due to his efforts coming in 8 fewer appearances.

Reading’s Yakou Meite is second in the list for SoT per 90 with 1.8. The Ivorian forward found the net 12 times last season as Reading flirted with a top-six finish throughout, eventually missing out.

Meanwhile, Bournemouth duo Arnaut Danjuma and Dominic Solanke made the top-ten after they both averaged 1.2 Shots on Target per 90 minutes, alongside Cardiff’s Kieffer Moore - who ended the campaign with 20 league goals to his name and will be keen to repeat those exploits this season. 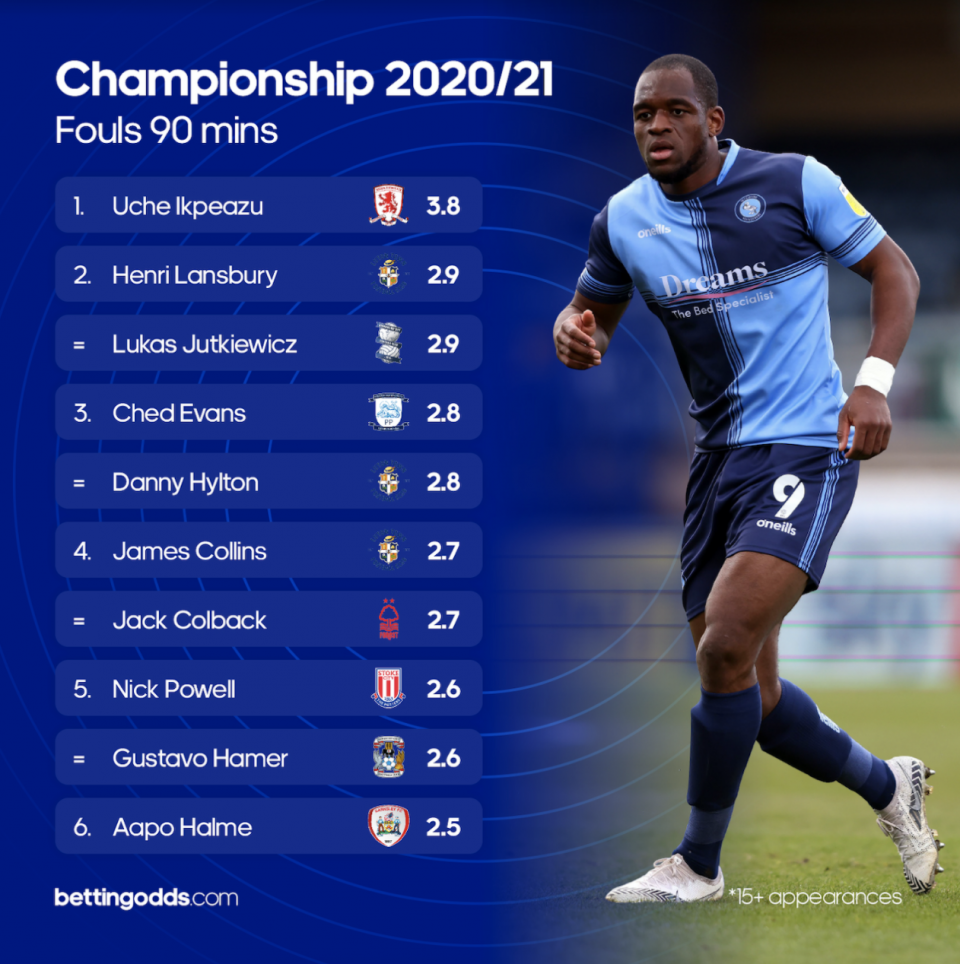 The player to rank first for fouls in the EFL Championship last season was Uche Ikpeazu, who spent the 20/21 campaign with Wycombe but has since moved to Middlesbrough following the Chairboys’ relegation to League One. The 26-year-old committed an average of 3.8 fouls per 90 mins, placing him well ahead of second-place Henri Lansbury, who averaged 2.9 whilst playing for Bristol City.

The ex-Arsenal midfielder will be plying his trade for Luton next season after making a summer switch to Kenilworth Road, so keep an eye on his price in the ‘to be carded’ market whenever the Hatters are in action. Birmingham’s tenacious front man Lucas Jutkiewicz ranked joint-second alongside Lansbury with 2.9 fouls per 90, while Preston’s Ched Evans ranked third with 2.8. 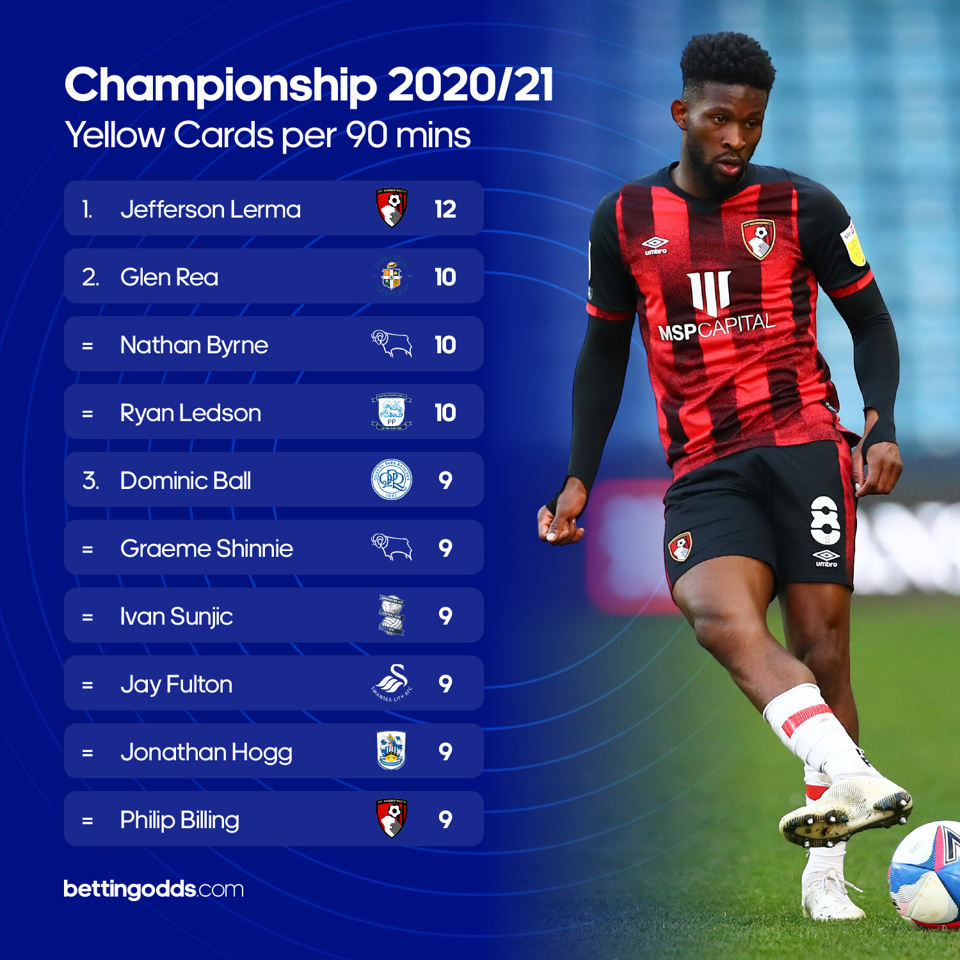 A familiar name sits top of the pile for the most yellow cards amassed in 20/21. Bournemouth midfielder Jefferson Lerma has picked up 37 yellow cards playing for the Cherries since his arrival from Levante in 2018, and last season he did not disappoint punters who backed him to find the referee's notebook by picking up 12 bookings - more than any other player in the second-tier.

Luton centre-back Glen Rea picked up two less yellows with 10, as did Derby wing-back Nathan Byrne and Preston midfielder Ryan Ledson. Six players picked up 9 yellow cards in 20/21, including Huddersfield’s Jonathan Hogg and Swansea’s Jay Fulton, so these are all players you should be looking out for when placing your Bet Builders this term.

For a lowdown of the best stats from the Premier League last season, check out our top-ranked players per 90 article.

Lingard to make it two in two against former club?

With Ronald Koeman under-pressure, we've picked out five names in the next Barcelona manager odds market

Pep Guardiola is attempting to become the most decorated manager in League Cup history.

Premier League Referee Appointments: Check out which officials are in charge on Gameweek 6 in the Premier League

What does the future hold for Derby County manager Wayne Rooney?

An in-depth look at the crisis engulfing Derby County and what it means for the future of manager Wayne Rooney.

Best bets for Tuesday's action in the League Cup

Advert Disclaimer
Bettingodds.com is a free online resource which endeavour to provide helpful and useful content and odds comparison to its visitors. Please be advised that Bettingodds.com accepts affiliate commission from the companies appearing on the site, and agreed commission levels impact the location and order in which the companies (and/or their products) are presented on the website. Any ratings that appear on this site is determined by our subjective opinion of the brand but also based on market share and reputation, each brand's conversion rates, commission paid to us and general consumer interest. Company listings on this page don't imply our endorsement. We do not feature all providers on the market. Except as expressly set forth in our terms and conditions, all statements and warranties regarding the information presented on this page are disclaimed. The information, including odds, which appear on this site is subject to change at any time.
Bet £10 Get £40 in Free Bets
#Ad. 18+ Playsafe. New customers using promo code M40 only. 1x per customer. Min £/€10 bet. Min odds 1/2 (1.5). Free bets of 2 x £/€15 issued after first qualifying bet settles. Max £/€10 Bonus. 35x wagering requirement. Max redeemable bonus: £25. Casino bonus expires after 72 hours. UK & Eire only. Additional T&Cs, including free-bet, game, location, payment method and stake contributions apply. See full terms below 18+ begambleaware.org
Welcome Offer
#AD Open Account Offer. Up to £100 in Bet Credits for new customers at bet365. Min deposit £5. Bet Credits available for use upon settlement of bets to value of qualifying deposit. Min odds, bet and payment method exclusions apply. Returns exclude Bet Credits stake. Time limits and T&Cs apply. The bonus code ‘100BET365’ can be used during registration, but does not change the offer amount in any way. 18+ begambleaware.org.
£20 Risk Free First Bet Money Back In Cash
#Ad. New customers only. Place your FIRST bet on any Sportsbook market and if it loses we will refund your stake in CASH. Max refund for this offer is £/£20. T&Cs apply.
Deposit £10 & Get £40 Cash Refunds On Losses
#AD New customers only. Deposit £10 using card or Trustly. Up to your first £40 of losses will be refunded as CASH within 24 hours of qualifying bet having been settled. T&Cs apply
Bet £10 Get £30 In Free Bets + 100 Free Spins
#AD 18+ New customers only. Opt in, bet £10 at odds 2.00+ within 7 days, no cashout. Get 3x £10 Free Bets, set events at odds 2.00+. Plus 100 Free Spins, no wagering. Free Bets and Spins expire in 7 days. Card payments only. T&Cs apply, see below. Please gamble responsibly.
Bet £10 Get £40 Free Bets
#Ad. New 18+ UK customers only. Bets placed and settled within promo period 00:00 20/09/21 until 23:59 03/10/21. Register using the promo code BETFRED40, deposit and place first bet of £10+ on Sports (Evens+) in one bet transaction. £40 in Free Bets credited within 10 hours of bet settlement and expire after 7 days. E-Wallet & Prepaid Card restrictions apply. SMS validation may be required. Full T&Cs Apply.
Bet £10 Get £30 Free Bets + £10 Casino Bonus
#AD Minimum deposit of £10 using deposit code 30F - A qualifying bet is a ‘real money’ stake of at least £10 placed on any sports market - Minimum odds of 1/2 (1.5) - Free bets credited upon qualifying bet settlement and expire after 7 days - Free bet stakes not included in returns - Casino Bonus must be claimed within 7 days • To withdraw bonus/related wins, wager bonus amount x40 within 14 days • Wagering req. vary by game • Withdrawal restrictions and Full T&C’s apply. 18+ begambleaware.org
Bet £10 Get £20 In Free Bets
#AD. New members. £10 min deposit & bet on sportsbook, placed & settled at 1.5 min odds within 14 days of sign-up. Win part of E/W bets. 2 non-withdrawable £10 Free Bet Tokens: accept in 7 days, valid for 7 days from acceptance (ex. E/Ws & Multiples), stakes not returned. Click here for Rules & Exclusions. Bet Responsibly. BeGambleAware.org. 18+
Up To £100 In Free Bets
New customer offer. Place 5 x €/£10 or more bets to receive €/£20 in free bets. Repeat up to 5 times to receive maximum €/£100 bonus. Min odds 1/2 (1.5). Exchange bets excluded. T&C's apply, 18+ begambleaware.org
Bet £10 Get £20 In Free Bets
#AD Min stake £10. Min odds 1/2 (1.5). First bet only. Free bets expire in 7 days. Cashed out bets won’t apply. Payment method restrictions. Online UK customers only. 30 days to qualify for £20 in Free Bets. 18+. T&Cs apply
HOME
FREE BETS
FOOTBALL TIPS
LIVE SCORES

#Ad. New customers only. Place your FIRST bet on any Sportsbook market and if it loses we will refund your stake in CASH. Max refund for this offer is £/£20. T&Cs apply.
get offer

#AD New customers only. Deposit £10 using card or Trustly. Up to your first £40 of losses will be refunded as CASH within 24 hours of qualifying bet having been settled. T&Cs apply
get offer

#Ad. New 18+ UK customers only. Bets placed and settled within promo period 00:00 20/09/21 until 23:59 03/10/21. Register using the promo code BETFRED40, deposit and place first bet of £10+ on Sports (Evens+) in one bet transaction. £40 in Free Bets credited within 10 hours of bet settlement and expire after 7 days. E-Wallet & Prepaid Card restrictions apply. SMS validation may be required. Full T&Cs Apply.
get offer