Dino Maamria Exclusive: The Tunisian trailblazer talks Stevenage, Oldham and having one up on Chris Wilder

“Disappointed? I was disgusted,” Dino Maamria tells The Sack Race when asked if he was disappointed at how his spell in charge of Stevenage came to an end back in September (2019). “Stevenage wouldn’t be where they are now [bottom of League Two] if I had stayed there. Everybody knows that.”

It took all of 10 days for Maamria to return to management at fellow League Two outfit Oldham, where he became the club’s fifth boss in a year. It was at the club’s stadium, Boundary Park, where The Sack Race met the Tunisian trailblazer for the latest instalment of 'In The Manager’s Office'.

Paul Scholes infamously lasted just 31 days in the Oldham hotseat whereas Laurent Banide oversaw only 11 games. So, with this in mind, was Maamria put off by the high turnover of managers at the Latics?

“Not at all,” he says. “If you’re not confident and you don’t back yourself you’re not going to make it as a manager. I think every task I’ve taken so far I’ve been quite successful. As a manager I haven’t failed yet, touch wood.

“I’ve won personal trophies but I haven’t yet got a promotion on my CV or won a club a trophy. That’s my next task which I will do at Oldham.”

Maamria, who has negotiated his way up from the non-league dugout with Norwich Victoria, Southport and Nuneaton Town, is currently the only professional African manager employed in the English Football Pyramid. “I’m aware of how difficult it is for an ethnic minority manager to be successful in the Football League.” he says.

“There aren’t many of us at the moment, I’m aware of that. I’m fortunate to be in a good job. I’ve overcome a lot of obstacles to prove to myself that I can carry on doing what I’m doing and get better every year.”

Maamria’s obsession with football was fuelled by Tunisia’s historic showing at the 1978 World Cup, during which his homeland famously became the first African country to win a match in the competition.

“I grew up more or less in the desert,” reveals Maamria. “As a young boy I’d play barefooted in the sun. Near where I lived there’s a football pitch by a big grain-and-wheat factory, and when I was 14-years-old I got spotted there by a fan of one of the big clubs [AS La Marsa] in Tunisia. He went back to the club and said: ‘I’ve seen this boy and he’s going to be something’.” 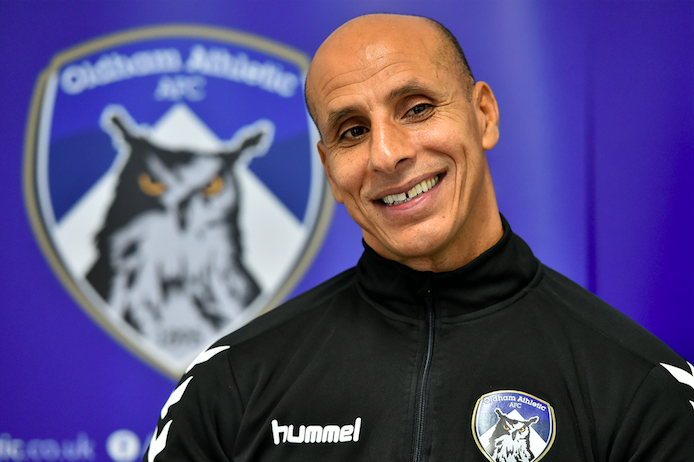 In terms of Maamria’s journey over to England, he was spotted by a Burnley scout who just so happened to take in a game when he was on holiday in Tunisia. “I was playing in the Tunisian Cup. He [the scout] approached me twice and the rest is history.

“I now always tell young players to perform at their best because things can change very quickly. You have to have that self-belief, confidence and determination to make it. The one thing I was always going to do was make it as a footballer.”

It was at Burnley where Maamria, when still a player, got his first taste of coaching at the club’s academy where he helped develop players such as Jay Rodriguez and Richard Chaplow.

“You have to be proactive,” says Maamria. “I had a bad injury [leg break] when I was at Burnley which ruled me out for 18 months. I’d get my treatment in the day then at night time I would spend three days a week working at Burnley’s Centre of Excellence with the U14s, U15s and U16s, which fuelled my desire to get my coaching badges further on. Then over weekends I used to take a Burnley Centre of Excellence team to Carlisle, Oldham, Rochdale and so on.

“My coaching experience meant that I had thousands of training sessions and team talks under my belt by the time I became player-manager of Northwich Victoria.” 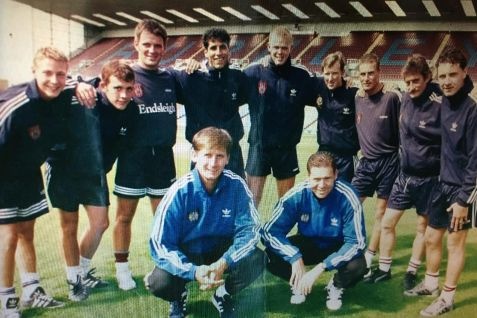 Maamria during his time at Burnley

That first managerial opportunity came in October 2017 when Maamria stepped up to the plate as Northwich Victoria’s caretaker manager, at a time when the financially troubled Conference club were rock-bottom of the table and 15 points adrift of safety after collecting two points from their opening 17 games.

Maamria proceeded to galvanise the confidence-crushed club, and in turn inspire a miraculous turnaround. Come the end of the season he’d not only led Northwich to safety but he was crowned Manager of the Year. Not bad for someone who eight months earlier hadn’t managed a game at senior level.

“On one of my coaching courses I remember Howard Wilkinson saying that not many managers come back after failing their first job, which is something that stuck with me,” he explains.

“When I look back on what I did there [Northwich Victoria] I’m amazed. There were no longer any odds available on the team going down.

“There were so many problems. I had a million reasons to fail. I backed myself but when I look back at why I was successful I don’t think I was good at all. There was no tactical knowhow, it was work ethic and pure determination. I did whatever it took to win. It was an unbelievable achievement and my best in football.” 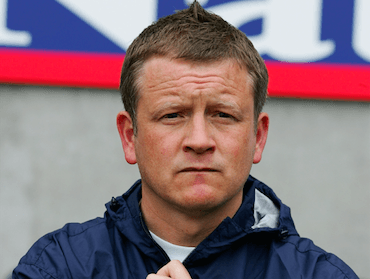 At the time [2007/08 season] the Conference was home to a hotbed of future Football League managers, including Nigel Clough, Paul Tisdale, Steve Evans, and a certain Chris Wilder - you can watch his edition of In the Manager’s Office here.

“I keep in touch with every one of those managers,” reflects Maamria. “We go back a long way.

“I think Chris Wilder’s Halifax had a 10 points deduction but they were still above us [Northwich]  but we managed to catch them up and they ended up going down that season. Chris took a couple of my players in January and I actually had the upper hand on him and he’ll tell you that himself! I remember we beat Stevenage on a Tuesday night in April, the game where it kept us up, and Chris text me afterwards saying:

‘F-me Dino, you needed snookers, how did you manage that!’”

Maamria then controversially departed Northwich Victoria in the early stages of the following campaign (2008/09). “I signed a three-year contract, went on holiday, and when I came back there was a new owner,” he says. “That’s when the problems started. Pre-season was very, very strange. 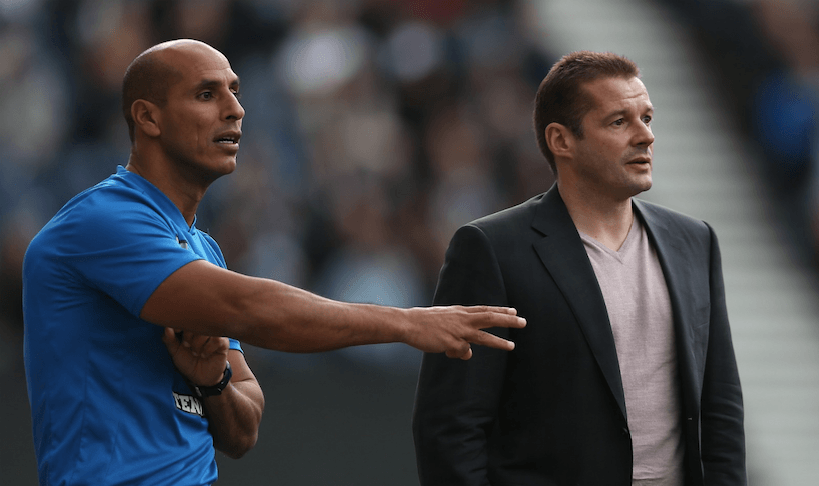 Maamria formed an effective partnership with Graham Westley at Stevenage

Maamria then formed an effective partnership with Graham Westley at his former club Stevenage, where he became first-team coach then assistant manager. The duo won the FA Trophy and propelled the club from non-league to League One, and would then later reunite at Preston and Newport.

“Me and Graham are similar in many ways, and different in others’” reveals Maamria. “Like any partnership we complimented each other. I knew his strengths and his weaknesses, as he mine. I’ve learnt a lot from him and he helped me grow as a manager. However, I was never going to be a No.2 for a long time, and he knew that.”

Maamria went on to manage the struggling duo of Southport (National League) and Nuneaton Town (National League North), and similarly to his spell at Northwich Victoria he had a galvanising effect as he moved both clubs clear of their respective relegation zones and up the table.

“I’m relentless in my approach,” he says when asked about his history of resurrecting teams.  “ I’m demanding and detailed, I always want more. My working environment is intense, which some people thrive on, while some people don’t. It’s not for everyone but the most important thing is that you’re authentic and you never try to be somebody you’re not.” 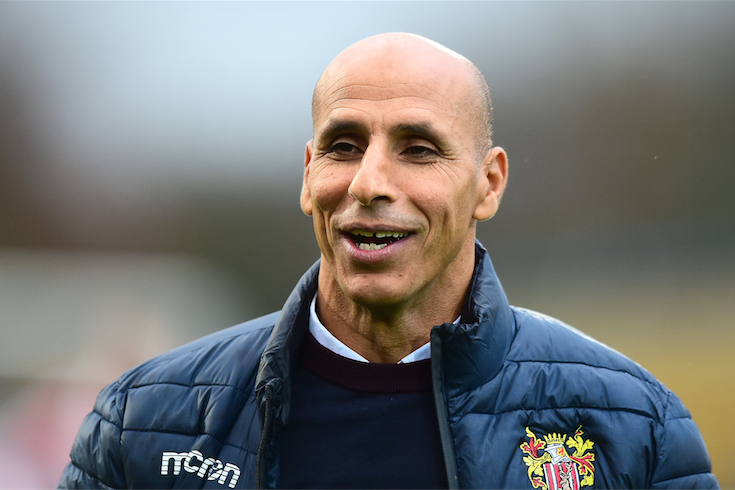 Maamria returned to Stevenage in March 2018. This time as the main man in the dugout. “I’m as qualified as any manager in the Premier League. I’ve got my UEFA Pro Licence, every qualification going, and all my experience behind me.

“Phil Wallace [Stevenage Chairman] knows my character very well. In his first call to me he said ‘Blimey Dino wherever you go you do a lot of winning. I want some of that at Stevenage.’ I’d been a player, coach and assistant manager there so I couldn’t turn the job down.

“I had a hugely successful full season there. I got them 70 points and 20 wins from 46 matches. We missed out on the play-offs because of a late, late goal in the Newport/Morecambe game  on the final day of the season.”

Reflecting on his departure in September 2019, Maamria revealed: “We’d had a bad start but we’d had a tough pre-season during which I lost eight starters from the previous campaign. I ended up playing a lot of 17/18-year-olds in tough games against the likes of Bradford and Mansfield.

“I felt that the club knew what I was about and why we didn’t win any of our first seven games, but that’s just another lesson for those Chairmen who make quick decisions. I knew if I had another five games I would have produced wins. I was disgusted at the time but I’ve moved on from it. They are where they are now, which is a shame, but I’m on with it at a great football club now.” 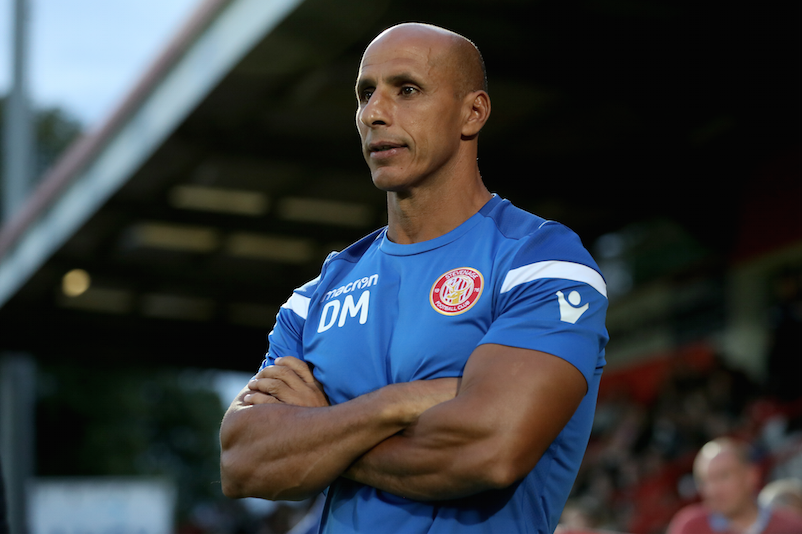 A manager’s life outside of the dugout is often overlooked. Many bosses have to travel far and wide to look for jobs, and this often means living away from their family. “On Tuesday afternoon I travel down South to see my wife and kids, and hopefully get home before they go to sleep,” reveals Maamria. “I take them to school in the morning [Wednesday], pick them up in the afternoon, put them to bed then drive back up to Manchester.”

And finally, the burning question: How can someone get guns like Dino Maamria?

“You know what, when I finished playing I didn’t want to be one of these overweight managers,” he says. “I never used to go to the gym unless I was injured but once I stopped playing I wanted to keep myself active.

“I started doing weights and progressed on from there. I go to the gym about four/five times a week, it makes me feel strong, mentally sharp, energised, young and gives me time to think. It’s the first thing I do in the morning. From a mental and physical perspective it puts me in good stead to attack the rest of the day.”