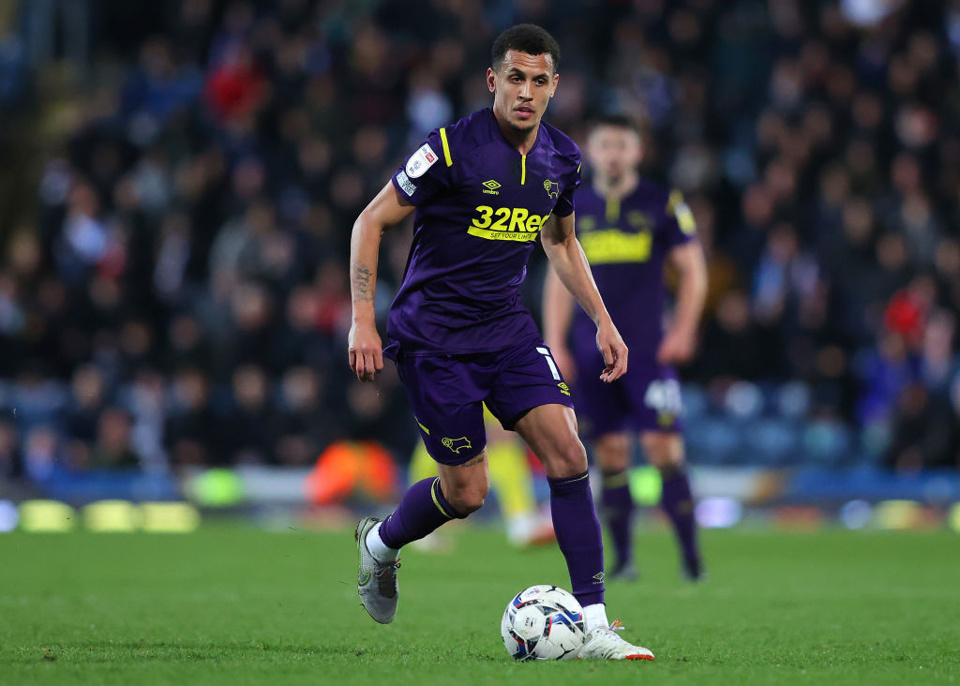 get offer get offer
#AD. New customers only. Place your FIRST bet on any market at odds of min 2.0 (EVS) and if it loses we will refund your stake in CASH. Max refund for this offer is £20. Only deposits made using cards will qualify for this promotion. T&Cs apply. 18+ begambleaware.org

Derby host Coventry in one of the two early kick-offs in the Championship on Saturday morning, live on Sky Sports.

Derby will be delighted to be back on home soil. Their defeat at Ewood Park on Tuesday was their 8th on the spin on their travels! A staggering run that depicts how the lack of experience may prove to be this youthful, threadbare squad's downfall.

That being said, Wayne Rooney’s Rams are massively exceeding expectations. The fact that they are even in the conversation for survale illustrates that, however, with Reading and Barnsley picking up points midweek, this clash has the whiff of a must win for Derby.

The visitors currently sit five points outside the play-offs. The 4-1 thumping of Sheffield United in their penultimate game may have been emphatic but amongst defeats to Hull, Luton and Swansea, the significance of it has been diluted.

Like Saturday’s opposition, three points is paramount if Mark Robin’s side are to stand any chance of staying within touching distance of that elusive 6th spot.

Derby come into this clash off the back of a capitulation at Ewood Park. It all started so well though. The Rams were ahead at interval but Tom Lawrence spurned a huge chance on the stroke of half-time to double the visitors lead, a miss that proved to be pivotal.

This campaign, the side have often epitomised supremo Wayne Rooney’s never-say-die attitude, and the most concerning thing about this defeat may be the manner in which it occurred. However, the fact is, Derby at Pride Park and Derby on the road are two different entities.

Something about the despair around the club has galvanised the fans and made Pride Park a fortress. The Rams are a superior side in every sense when they don the white.

At home this campaign their defence is much tighter. They have shipped an average of 0.88 goals per game, on the road that figure rises to 1.40. Their attack is also much sharper. At home, they have scored 25 goals in 18 games, away they have scored 12 in 20 games, that is more than twice as many in three hours less football.

As far as an explanation goes, I think the impact of the fans cannot be understated. Tactically though, this young squad seems much more comfortable closer to home. Rooney likes his side to dictate the tempo of their game, press high and unsettle the opposition.

The Rams are amidst a dire run that has seen them lose five of their last six games. However, I do not think it is a coincidence that their only victory has come at home, it is sandwiched in between four defeats, all of which came away.

Taking Derby 0.0 on the asian handicap at 117/100 with Bet365 is the way to go for me as it gives you the added security of money back if this one ends all square.

From mid-December to the start of January, Derby took ten points from four games, winning three on the spin. Central to the teams merry Christmas period were Colin Kazim-Richards and Luke Plange’s glut of goals as the duo combined for five of Derby’s six over that period.

The pair have struggled since. Kazim-Richards has been blighted with injury and 19-year-old Plange has struggled for consistency, which is understandable considering he is spearheading an attack in his breakout season.

Rooney mixed things up for his side's trip to Blackburn in their last game. Ravel Morrison- who predominantly operates as an attacking midfielder- spearheaded a 4-2-3-1 as a false nine, in a fluid Derby frontline. A tactic that worked wonders as Morrison opened the scoring just shy of the half hour mark.

This was the ex-Manchester United youngster's third goal in three games. Perhaps, it is no coincidence to see him quickly follow his first league goal in eight years with his second and his third in a season where he has already broken his record for domestic appearances.

Morrison's quality has always been clear to see but with him adding numbers to his game, he is showing us why Rooney has maintained so much faith in him.