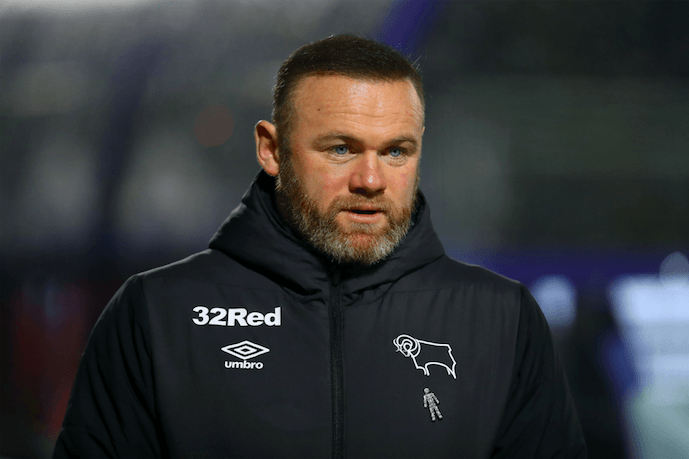 Wayne Rooney's side have won three on the bounce at home with conceding a goal
By Joshua Jones
16:35 Friday 28th January 2022 - 4 minute read

With Premier League football adjourned until next month, Super Sunday this week comes in the form of a Championship tie as Derby County welcome Birmingham City to Pride Park. The Midlands clash could have huge ramifications at the foot of the table, as Derby desperately attempt to claw their way out of the relegation zone amid a plethora of off-field turmoil.

The Rams have picked up enough points this season (35) to be comfortably mid-table, but a 21-point deduction for entering administration and breaching accounting rules sees them languishing in the relegation zone, eight points from safety. While they still have a mammoth task on their hands to secure Championship safety for another season, it cannot be understated the impressive job Wayne Rooney has been doing.

Working with limited options and achieving impressive results in his first managerial role, it’s no surprise they’re having to fend off Premier League interest - particularly from his boyhood club Everton as they look to appoint Rafael Benitez’s successor. One of their biggest strengths this season has been a resolute defence, conceding less goals (26) than promotion-chasing Blackburn (30) and QPR (31) and almost half as many as relegation rivals Reading (51).

It’s at the other end of the pitch that’s costing them. The Rams are averaging just 0.96 goals per game in the league this season, and it’s the reason they’ve drawn 41% of their matches - by far the highest rate in the Championship. What has worked for them, however, is turning Pride Park into a tough place for opposing sides to visit. Derby have lost just two of their 13 home league games this term, and with 33,000 fans expected at a sell-out on Sunday it won’t be a walk in the park for a Birmingham side that have struggled away from St.Andrews this season.

The Blues have won just three of their 14 away games, scoring just 13 times and conceding 23, including 14 in their last four - though six of those came in one game against Fulham.

Since that thrashing, they’ve beaten bottom of the league Barnsley, though they laboured for that, and left it late to salvage a 2-2 draw at third-bottom Peterborough with 85th and 88th minute goals from Gary Gardner and Scott Hogan respectively.

The nature of those results won’t fill many fans with confidence, given they should have been comfortable victories on paper, and neither will their form over the last two months. One win in eight games since the start of December is hardly exhilarating for Birmingham fans, but Lee Bowyer has done a solid job of steering them comfortably towards safety with the tools at his disposal.

The Blues are 12 points clear of the relegation zone thanks to purple patches in August and October and, just as he did at the back-end of last season to stop the rot they were suffering under Aitor Karanka, Bowyer is keeping the club in the division. He has managed to boost his options this week too, with the additions of Juninho Bacuna on a permanent deal from Rangers and Lyle Taylor on loan from Nottingham Forest. Bacuna made just two starts for Rangers after joining from Huddersfield in the summer and, whilst inconsistent, clearly has the quality needed at this level. Meanwhile, Taylor joins having not really made the impact expected of him at Forest though he bagged 36 in 67 games under Bowyer at Charlton Athletic.

Despite defeat at bitter rivals Nottingham Forest last weekend, Derby have been in good form and especially (as mentioned before) at Pride Park. They’ve won three in a row in their own backyard without conceding and have opened the scoring in 77% of their home games this season. The visitors, on the other hand, have conceded first in 64% of their away games and have actually failed to score at all in half of them.

Lawrence has been one of the driving forces behind Derby’s impressive form this season, directly involved in 11 of their 26 Championship goals, but he’s also very petulant and it shows in the seven yellow cards he’s earned in just 24 starts.

He was booked earlier this season in the reverse fixture and it wouldn’t be a surprise to see him pick up another here, given he’s averaging 2.5 fouls per game over his last six starts. Lawrence has actually scored and been carded in each of his last two games too, so it wouldn’t be out of the ordinary for him.