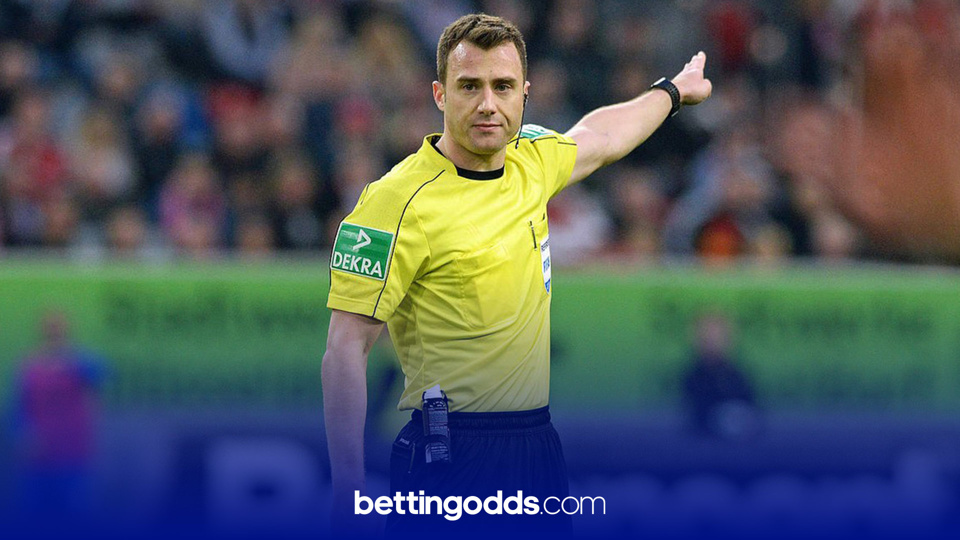 Referee Felix Zwayer's has given out 38 yellow cards over his last six games in the Champions League and Europa League
By Anthony Eadson
17:11 Tuesday 3rd November 2020 - 5 minute read

It’s Matchday three in the Champions League with eight games making up the slate on Wednesday. Both Manchester United and Chelsea are in action with the Blues taking on Rennes at Stamford Bridge, kicking off at 8pm. Our man @Anthony Eadson has three football tips for the game which can be seen live on BT Sport.

Chelsea’s new goalkeeper Edouard Mendy should start and face his previous employers after keeping five clean sheets in his first six appearances for the Blues. Christian Pulisic is ruled out with a hamstring injury along with Billy Gilmour.

Rennes will be without the talented 17-year-old Eduardo Camavinga for the game which is a huge blow for the visitors. M’Baye Niang and Daniele Rugani are also sidelined, however former Blackburn and Stoke man Steven N’Zonzi should return after missing the game against Sevilla through suspension.

After putting together a run of nine games unbeaten, Chelsea are unsurprisingly the favourites with the bookmakers to win the game, priced at 1/3. The draw is available to be backed at 4/1 with a win for the French outfit priced at 8/1, an implied probability of 11.1%.

Chelsea v Rennes
Chelsea to win to nil
11/8
Chelsea have kept four clean sheets in a row Edouard Mendy has kept five clean sheets in his six appearances for Chelsea
Odds correct as of 2020-11-03 16:45 Odds subject to change.

The first of three selections I’m fancying on Wednesday evening is Chelsea to win to nil. As I mentioned earlier, since the arrival of goalkeeper Edouard Mendy, Frank Lampard’s side have kept five clean sheets in the six games he has played in.

The Senegalese keeper has looked much more assured in goal than Kepa Arrizabalaga did at the start of this campaign and that has translated into some much more solid defensive performances from Chelsea. The Blues are now unbeaten in nine games in all competitions and with other new arrivals such as Timo Werner and Hakim Ziyech starting to find form, it looks a good time to get behind them.

Rennes have only won one of their last five games in all competitions and were uninspiring in their 1-1 draw with Krasnodar and 1-0 defeat to Sevilla in recent weeks. Chelsea’s girthy squad should allow them to navigate through the hectic fixture list and even with numerous changes to the starting line up I see them running out comfortable winners here. If Lampard’s men can keep the stability at the back they have found in recent weeks, Chelsea to win to nil looks a great play at 11/8 with BetVictor or slightly bigger on the Betfair Exchange at just under 6/4.

Damien Da Silva to be carded
5/1
Da Silva been booked an incredible five times in 10 appearances this season Felix Zwayer is the referee who has dished out 38 yellows across his last six games when refereeing in the Champions League or Europa League Looks overpriced with Unibet with other firms going 21/10
Odds correct as of 2020-11-03 16:50 Odds subject to change.

Next up I’m dipping my toe into the ‘to be carded’ market where I’m backing Rennes central defender Damien Da Silva to find his way into the notebook at a rather large looking 5/1 with Unibet. The 32-year-old has been booked a whopping four times in just eight games in the league this season and was booked in Matchday 2 of the Champions League when visiting Sevilla.

That’s five bookings in ten appearances this season for the Frenchman this term and another great reason behind to get behind this punt is that German referee Felix Zwayer will be the man in charge. One of the most card-happy ref’s in Europe, Zwayer has brandished 38 yellow and two red cards over his most recent six games that he has taken control of in the Champions League and Europa League. Betfair have this selection at 21/10 with Boyle Sports and others going 9/4. All things considered 5/1 looks a steal here on a player who has been booked five times in his last ten games.

Champions League Betting
Ziyech 2+ shots on target, N'zonzi & Jorginho to be carded
40/1
Ziyech registered four shots on target against Krasnador last week and looks to be coming into form now match fit N'zonzi has been booked in four of eight league games he has played this season Jorginho was booked on 13 occasions across the Champions League and Premier League in 2019/20
Odds correct as of 2020-11-03 16:50 Odds subject to change.

My third and final selection for Chelsea v Rennes is Hakim Ziyech to have two or more shots on target with both Steven N’Zonzi and Jorginho to be carded at 40/1 with Paddy Power.

Hakim Ziyech is a player who I’ve really enjoyed watching over the last few games and I think he’s got a bright future at the club. Ziyech has registered five shots on target over his last two games which have been his only starts for the club this season after recovering from injury. After having four on target against Krasnodar last week I think it’s well within Ziyech’s capabilities to have two on target against Rennes.

The first of two bookings that make up this Same Game Multi is Rennes’ Steven N’Zonzi. One of my favourite players as a Blackburn fan, the hard working midfielder has enjoyed an excellent career around Europe. The 31-year-old has picked up four yellow cards in just eight league games since arriving at Rennes and with bet365 going 6/5 on this same selection I’m happy to add him in here at 11/4 with Paddy Power.

The final element of this three-pronged-punt is Chelsea’s usual suspect, Jorginho, to pick up a card. With Felix Zwayer in charge it could be raining yellows on Wednesday and after picking up 13 bookings in the 2019/20 season, Jorginho looks primed for his second in three games in Europe’s premier club competition.

Best of luck to those following the selections on Wednesday. Enjoy the game and always remember to gamble responsibly.