Chelsea v Norwich Tips: Bet on Willian to score in fifth consecutive game at The Bridge 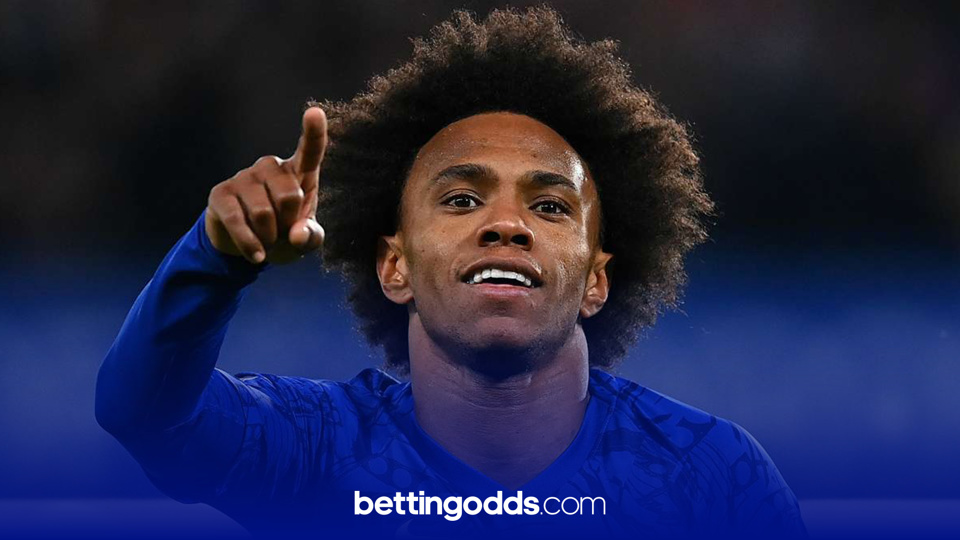 Norwich became the first side to be mathematically relegated from the Premier League this weekend as they were beaten 4-0 at home to West Ham. The Canaries travel to the capital to face Chelsea tomorrow evening with the hosts looking to strengthen their grip on a Champions league place. The game is live on SkySports at 20:15pm with freeview customers also being able to watch the game on channel 11, Pick.

Chelsea are currently priced at 1/4 in the top 4 betting, but after a humiliating 3-0 defeat at the weekend to Sheffield United, Frank Lampard will be looking to bounce back in style before his side’s FA Cup semi-final against Manchester United on Saturday.

Having a look at the prices for this game and bookmakers are taking no chances on a Chelsea win, which is priced as short as 1/9 with WilliamHill. Bearing in mind that Norwich have taken six points out of a possible 51 away from home this season and are winless against Chelsea in 26 years it’s no surprise to see them given just a 4% chance of winning from PaddyPower with odds of 22/1.

Billy Gilmour sustained a knee injury in the 3-2 victory over Crystal Palace and it’s looking like he may face up to four months on the sideline for the Blues. N’Golo Kante could be fit for Sunday’s game v Manchester United but will most likely miss out here. Todd Cantwell should start for Norwich after returning from injury against West Ham on Saturday. Grant Hanley, Sam Byrom and Christoph Zimmermann all will miss the game with long term injuries.

My first selection here is Willian to score anytime at the generous price of 9/5 from both Betfair and PaddyPower. One of the stand out players since the resumption of the Premier League has been Willian and his performances along with others such as Christian Pulisic for Chelsea. He’s enjoying his best ever season at the club with 11 goals and 9 assists over all formats this season and with his contract still not tied up, he just may be on the move this summer as he reaches the age of 32.

Willian has scored in his last four games at Stamford Bridge and tonight faces a Norwich team who were relegated on Saturday after a woeful 4-0 defeat to West Ham. Norwich looked all over the place at the weekend and I see Chelsea dominating this one as they need the three points. Willian is also the penalty taker for Chelsea when Jorginho isn’t on the pitch which adds another string to our bow and when considering we are getting 9/5 for him to score in 90 minutes, I think it’s a very attractive bet.

What a strike from Willian!

Next up I’ve gone for Mason Mount to have a shot on target and Emiliano Buendia to be carded at 11/2. As I mentioned with my first bet, I see Chelsea dominating this one and I think it could become a bit of a shots on target fest so I’ve opted for Mason Mount to have one. He averages 2.3 shots per game this season in the league and with the opposition tonight being Daniel Farke’s side, I think that figure could well rise.

Norwich will be without the ball for long periods of the game and it’s no surprise to see a few of their players at rather short prices in the bookings market. I’ve opted for Emilianio Buendia who should have Christian Pulisic and Marcos Alonso running at him this evening. He’s been booked five times with only Klose and Trybull averaging more fouls per game for Norwich this season. Doubling those up pays 11/2 with PaddyPower which I’ll be having a little nibble of.

Two shots on target and two cards once again make up tonight’s longshot and after I managed to pick out both Ward-Prowse and Wan-Bissaka to be carded last night. Tonight I’m going for Ross Barkley to have two or more shots on target with both Jorginho and Max Aarons to be carded at 70/1 with PaddyPower.

Ross Barkley actually averages more shots per game in the Premier League season than both Willian and Oliver Giroud with Barkley being a bigger price than both of those to land two on target this evening. He’s looked sharp since the restart and has been on the scoresheet twice most recently in the home game to Watford. I think there’ll be queueing up at times for shots on the Norwich goal this evening and I feel Ross has enough selfishness about him when it comes to shooting to land us two on goal tonight. Priced at just over 2/1 as a single, I’m happy to throw this one into this 70/1 Same Game Multi

Onto the cards and after his start against Sheffield United at the weekend and with Billy Gilmour being out injured I’m hoping Jorginho will keep his place as part of a midfield three. The Italian has been booked 10 times in 24 league starts this season with only Jefferson Lerma and Luka Milivojevic being booked more. If there’s anyone who will be carded tonight I feel it’s him for Frank Lampard’s side.

The final part of this three pronged punt is Norwich’s Max Aarons to be carded. He’s been one of the better players for the East Anglian side in this campaign and I feel could remain at this level based on his ability. However when it comes to discipline, Aarons has been carded seven times this season which is more than any other player at the club. He’ll be up against Christian Pulisic and I’m fancying him to find his way into John Moss’s notebook tonight. Putting those three together pays 70/1 with PaddyPower but it’s also worth mentioning if Jorginho does not start this evening I’ll be replacing him with Mateo Kovacic which would take us the bet to around 100/1. Follow myself @AnthonyEadson or @BettingOddsUK to see any of our replacement picks due to team news, as always enjoy the game and please remember to gamble responsibly.