Championship Relegation Odds 22/23: Rotherham are the early favourites to go straight back down

Championship Relegation Odds: The Millers' Paul Warne is a man under pressure, with his side freshly installed as the bookie favourites to be relegated.
By Adam Roberts
11:34 Wednesday 20th July 2022 - 7 minute read

As part of our ongoing ante-post articles prior to the 2022/23 season, we have taken a look at the Championship Relegation odds. The season kicks off on Friday 29th July, with a televised game between play-off final losers Huddersfield Town and relegated Burnley, so now is the perfect time to get looking at those ante-post odds and trying to find a bit of value. 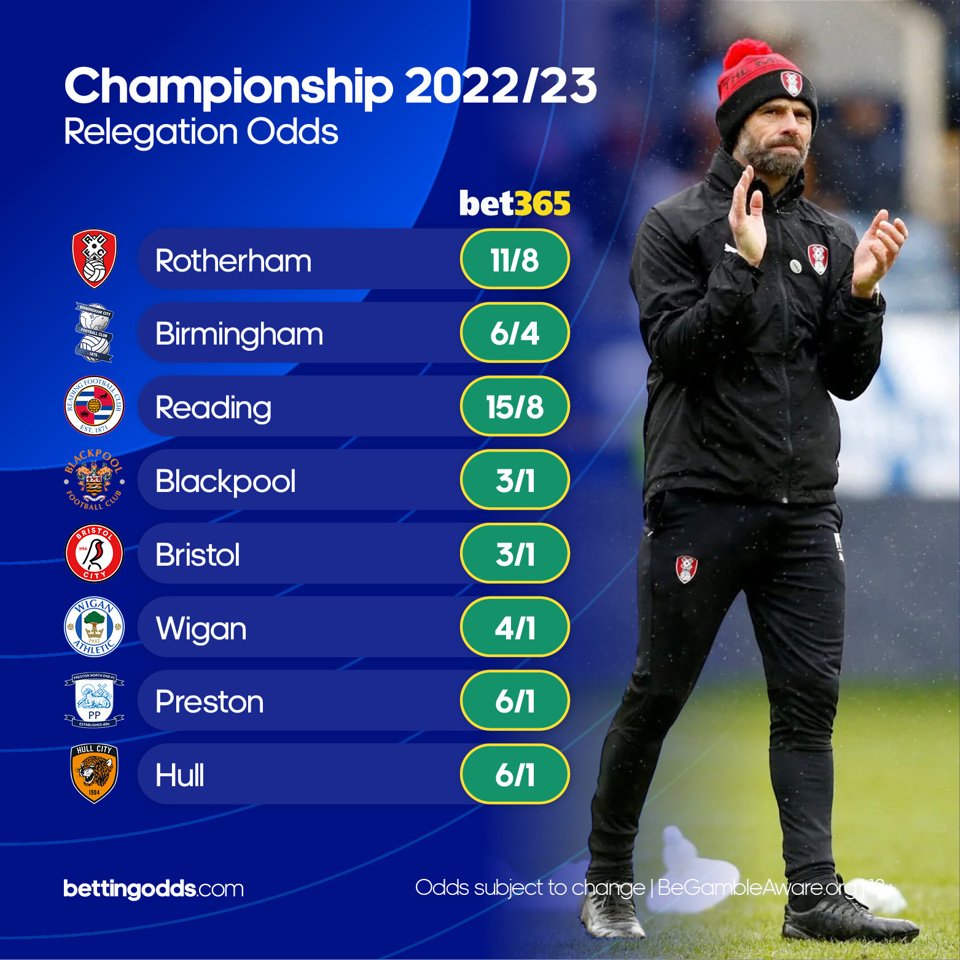 Who are the favourites for relegation?

Paul Warne's Millers had a great season last year, finishing 2nd in League One and clinching promotion back to the second tier. However, the bookies don't fancy their chances of remaining there for long, installing the South Yorkshire club as the heavy favourites to be relegated. Rotherham look to have picked up some interesting frees who should do a job at this level but their squad still looks light for what is an extremely hard division.

City had a poor season in 2021/22, finishing in 20th spot and you have to think, were in not for points deductions, they could have got dragged into a serious relegation battle. Not only that but what followed was a summer of further turmoil; sacking Head Coach Lee Bowyer and installing former QPR no.2 John Eustace on a three year deal. Eustace is highly rated but he has a huge job on his hands here and the Blues appear to have gone down the frees/loans route in their summer transfer business.

The Royals were another team who struggled last year but they did have to contend with a points deduction. They had no problems scoring and keeping top scorer Lucas Joao is a big fillip for them this season. Last year's interim boss Paul Ince has been given the job full-time and has brought his son Tom in, amongst others including a couple of impressive looking loans/frees in Jeff Hendrick and Shane Long. I personally think Reading will be ok this term.

Bristol City had a mediocre season in 2021/22, finishing 17th spot, yet sat comfortably above the relegation spots. They have picked up some interesting looking free transfers and Nigel Pearson will be confident he can build upon last year. I can't see this one happening.

Michael Appleton has managed to keep together the core of the side who finished 16th last year and 23 points above relegation. Man CIty youngster Lewis Fironi should improve their midfield options and Appleton suggested this week he was after another central midfielder and right-back so they should look stronger still. 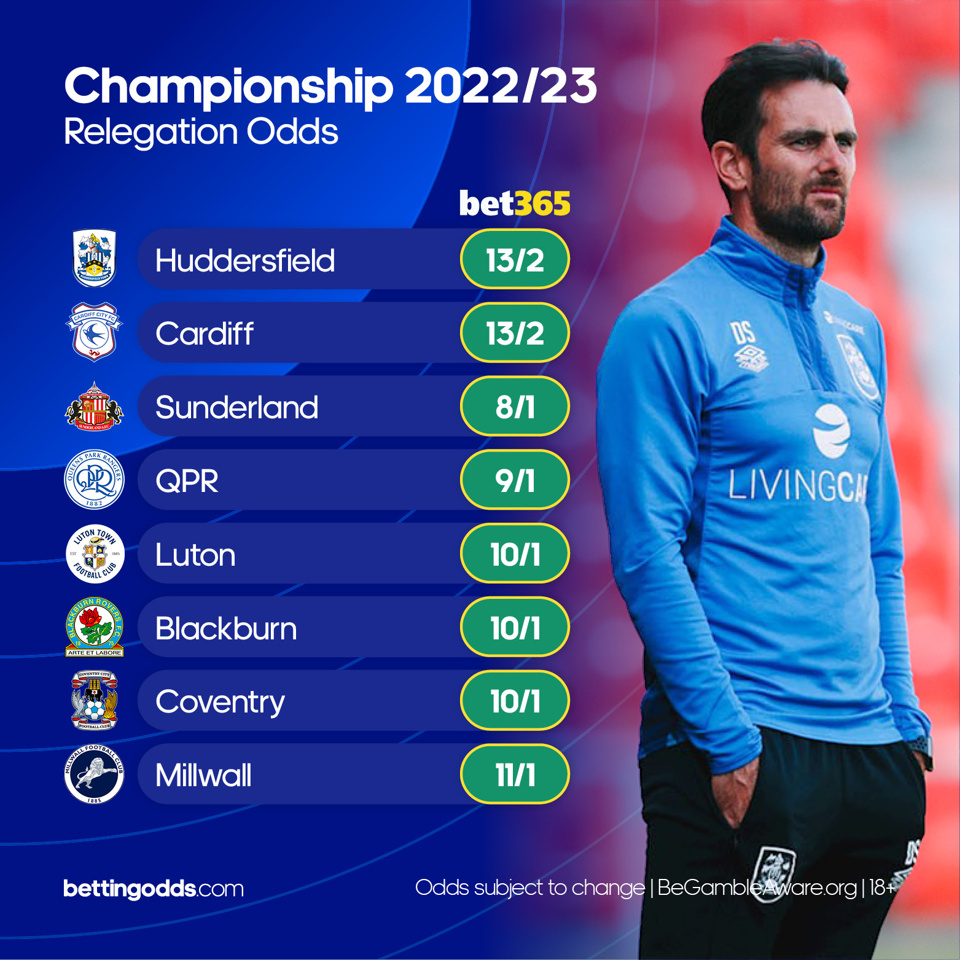 Who else could be in danger?

Leam Richardson must be a little concerned by the lack of action in the transfer window this season. The League One champions have seen their squad reduce by half a dozen, with loans returning to parent clubs as well as a few others leaving, while so far no-one at all has come into the club. Chairman Talal Al Hammad has promised to strengthen the squad but they are running out of time before the season opener a week on Saturday. One would think the current squad is going to struggle otherwise.

Head Coach Shota Arveladze has been exceptionally busy in the transfer window - shipping out some favourites from last year including Tom Eaves and George Honeyman, whilst they also lost their 21-year-old forward Keane Lewis-Potter to Brentford for a reported £15m+. Arveladze has wasted no time bringing in plenty of talent on loans and frees and will be confident of a higher placed finish than last years 19th.

As a Town fan I was fairly excited about this season after the unbelievable run last year, that culminated in a play-off final loss at Wembley. However, the exit of boss Carlos Corberan soon put the dampeners on that and it looks likely that the two star players Lewis O'Brien and Harry Toffolo, will be heading to the victors, Nottingham Forest shortly. New Head Coach Danny Schofield is a club legend but is untested in this role and a bad start could well lead to early pressure on his head. The signings of Kasumu, Rudoni and Nakayama all look like shrewd business and I will be surprised to see the Terriers dragged into a relegation scrap.

Steve Morison is another coach who has been busy through the summer, clearing out a lot of dead-wood, whilst bringing in numerous free transfers from Championship and Premier League clubs, notably winger Sheyi Ojo from Liverpool and Vontae Daley-Campbell from Leicester. Again I don't see Cardiff being dragged into a battle for the drop. 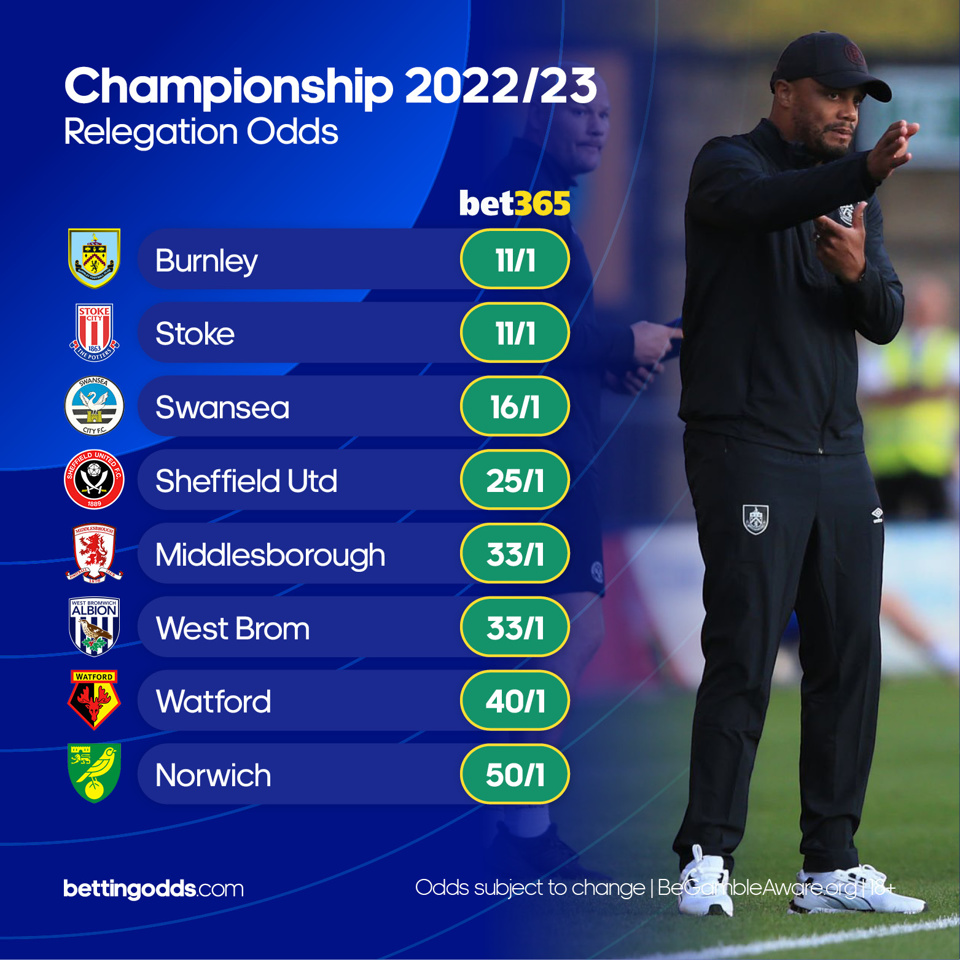 Looking at the ins and outs certainly gives us some scope for who might struggle this year. Rotherham look extremely light at this level and I would happily stick them in a double with Birmingham City who look on a downward spiral. Wigan would probably be my third choice if they don't strengthen significantly . Their lack of transfer activity just nine days before the start of the season worries me deeply.

If you also fancy those three clubs to go down, you can back the relegation treble at Unibet at 40/1.