BTTS Tips: Steve Cooper has been extremely active in the transfer window and will be hopeful of some home points against Spurs.
By Adam Roberts
17:00 Saturday 27th August 2022 - 3 minute read

There are three Premier League games on Sunday as well as a raft of football from all over Europe. We have asked our resident statto Adam Roberts to pick us out a four-fold and he's done just that. It pays 7/1 at app-based SBK and you can pick up a free £30 bet using the link above. His BTTS acca was just one goal short of hitting on Tuesday so can he go one better on Sunday. Let's find out...

We start our European journey in the East Midlands and a Premier League clash between Forest and Spurs. Both these sides have had good starts to the season with Spurs unbeaten and sat in 4th, while big-spending Forest have responded from their opening day defeat with a win and a draw to sit comfortably in mid-table at this early stage of the season.

The Tricky Trees are extremely strong at the City Ground and will be a tough proposition for Spurs here. Tottenham meanwhile have seen BTTS hit in two of their three opening games.

We move into Germany and a Bundesliga tie between Cologne and Stuttgart. Both sides sit in mid-table after mixed starts and one reason for that is their defence.

Both these sides have conceded in all three games so far this season and BTTS has hit in five of the combined six fixtures. 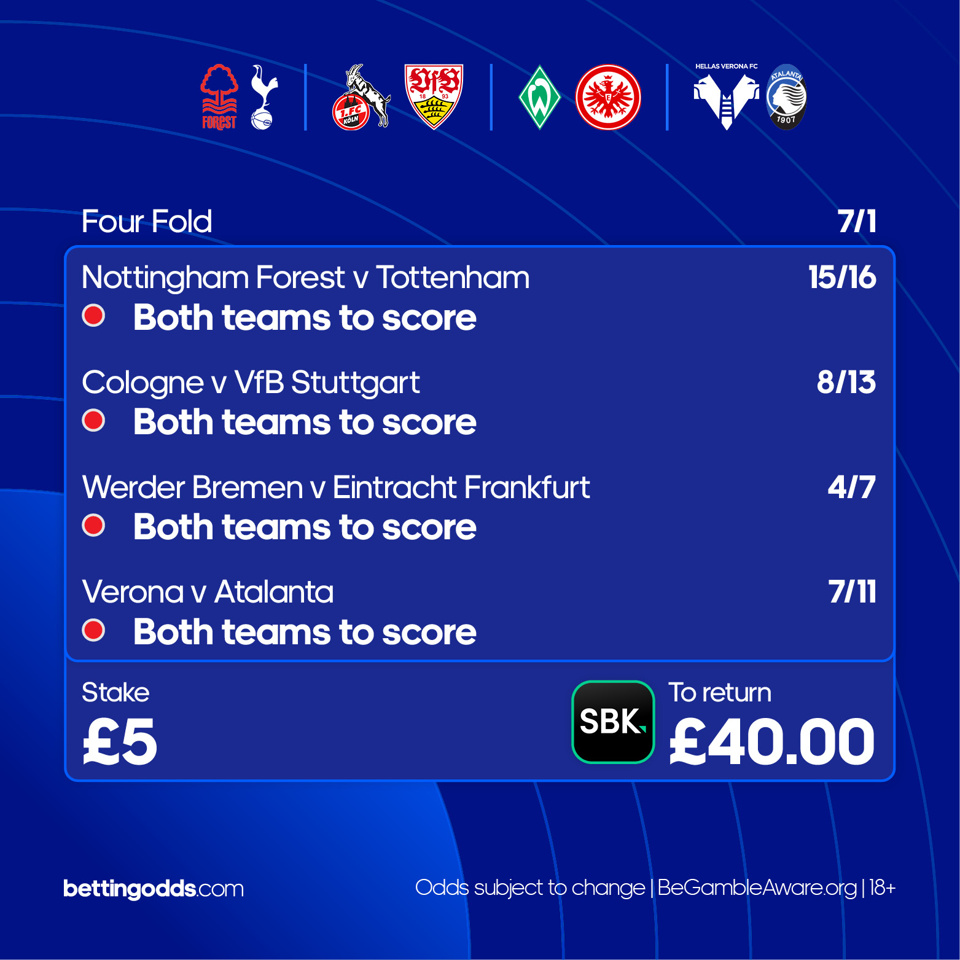 We stay in Germany for another mid-table Bundesliga battle between Bremen and Frankfurt.

Bremen are certainly not boring and have seen a combined 13 goals scored in their three matches thus far and BTTS occurring on every occasion. Frankfurt have been equally generous at the back, conceding eight times in three matches and also scoring in every game at the same time. This one screams goals.

We finish our journey in beautiful Verona and a Serie A contest between 17th placed Hellas and European football chasing Atalanta.

Verona have conceded six in their opening two games whilst also scoring three and Atalanta have scored in both their games so far.