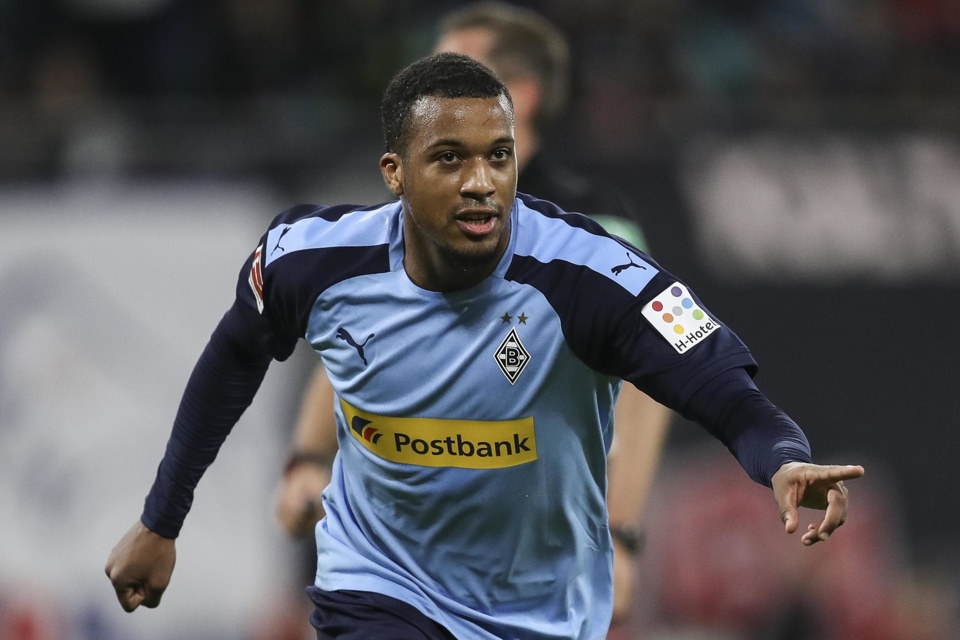 Allasane Plea was on the scoresheet within 40 seconds for Monchengladbach last weekend.
By Russell Palmer
12:04 Friday 22nd May 2020 - 4 minute read

If you're new to following the Bundesliga and this is essentially, week two as far as your interest and your betting goes, then Saturday's match between Borussia Monchengladbach and Bayer Leverkusen is one to make the mouth water.

Two teams in form and chasing a place in next season's Champions League, Gladbach leapfrogged RB Leipzig on Saturday with their 3-1 win over Eintracht Frankfurt, whilst Leverkusen kept up pace in fifth, just two points behind Saturday's opponents with an impressive 4-1 win away at Werder Bremen.

The bookies don't make a lot in this, with the home team slight favourites at 7/5 giving them an implied probability of 42% that they'll win, with Leverkusen a 7/4 chance (36%), with the draw possibly offering the best value in the match odds at 11/4 (27%).

We've picked out three different football tips for the match that kicks off at 14:30 BST and can be watched on BT Sport or live streamed on the Betfair website if you've had a bet.

We have two of the most attacking teams in the Bundesliga on display in this match, Gladbach netting 52 times this season and Leverkusen 49. A six-pointer in terms of the Champions League qualification we're expecting fireworks!

Alassane Plea to score anytime and have two or more shots on target at 3.97/1 - Betfair.

Borussia Monchengladbach's Alassane Plea is averaging 2.9 shots a game in the Bundesliga this season with 56% of those shots being on target. The Frenchman was on target within 40 seconds at Eintracht Frankfurt last Saturday and he's the favourite to open the scoring at 5/1 and 9/5 to get a goal anytime. We've coupled that up with him to get two or more shots to just eek out a little more value for the bet.

We also wouldn't put you off backing Sven Bender to be shown a card at 11/2. The Leverkusen defender was booked on Monday following a rash challenge and for a centre back playing up against such an attacking unit, that price just looks really good.

Ramy Bensebaini to score anytime, have one shot on target and pick up a booking at 17.29/1 - Betfair.

There's such an array of attacking talent on the pitch on Saturday but we've picked out some value in an all-action defender.

Borussia Monchengladbach defender Ramy Bensebaini is averaging over a shot a game this season and half of those have been on target. The Algerian has scored five times this season from just fourteen shots and priced up at 5/1 to score anytime and 11/8 to have one or more shots on target makes massive appeal.

Picking up three bookings from his ten games started, the Algerian is also on the radar in the bookings market at 6/4. The 25-year-old is that kind of all-action defender you just love to include in your same game multis, grabbing an assist and a goal in his team's win in Frankfurt last weekend, he's also on penalties! The holy trinity of a shot on target, goal AND booking pays 17.29/1 with Betfair.

Kai Havertz two or more shots on target, Karim Demirbay to score anytime and Stefan Lainer to be booked at 57.31/1 - Betfair

We were all over Kai Havertz in our bets for Monday night and we hope you got on our winning 11/1 same game multi which included Havertz to have two or more shots.

With Kevin Volland still on the sidelines, Havertz once again makes appeal in the shots and scorer markets. Monday's brace sees the young German move to eight for the season and leading the line on Saturday the 6/4 to have two or more shots on target forms the base of our same game multi.

Whilst Havertz grabbed the headlines on Monday, pulling the strings in midfield was playmaker Karim Bellarbi who seems to be going under the radar in the goalscoring and shot markets. The German has amassed 50 shots this season, that's the same as injured striker and top scorer Volland. He's averaging over two shots a game and he's had 21 shots on target this season from 23 games played. We're locking in the 25-year-old to score anytime at 9/2.

Add into a mix a booking for Gladbach right back Stefan Lainer who has already picked up six cards this season. The Austrian averages 1.5 tackles a game but 1.3 a game result in fouls. With the likes of Bayer's Moussa Diaby buzzing around him on the left wing we'll take out chances of the 11/4 shot landing to complete out same game multi.