Thrills, spills and chills - the 2021/22 footballing season has had it all so far! From Manchester City's nine-point lead in their Premier League title defence and Watford's Claudio Ranieri becoming the eighth managerial casualty to refereeing blunders at the Africa Cup of Nations and the dwindling returns of historic giants such as Man Utd, Barcelona and Juventus.

Drama is at the height of every sport but no other captures it quite so effortlessly or effectively than football.

Betting can often be the peak or trough for footy fans throughout the season; whether it's celebrating the highs of a successful accumulator or commiserating the lows of a marginal losing bet due to late drama.

That's why during this January winter break for the Premier League, we've decided to recap some of the biggest winning bets of the current campaign, offering a little further insight into each special story.

£15k from a fiver on corners five-fold

First up, way back in August, Sky Bet took a huge hit as one punter scooped £15,000 from a corner-centric bet across five fixtures from the four English football leagues.

This long shot saw the unnamed bettor place £5 for each team to register two or more corners in each half, with the selected games being QPR vs Barnsley, Liverpool vs Burnley, Ipswich vs MK Dons, Forest Green vs Crawley & Luton vs Birmingham.

Proceedings got underway with the 12:30pm PL kick off, and hopes of an incredibly profitable weekend were almost dead at the first hurdle. Three of the four required corners were quickly accrued in the space of seven second-half minutes, with just a single Burnley corner required for the first leg to land. However, Dyche's men found themselves pegged back for the majority of the action at Anfield.

Thankfully, substitute Jay Rodriguez's shot ricocheted off Virgil Van Dijk, resulting in a corner for the Clarets. The remaining four selections romped home during the day's 3pm matches, and the rest as they say, is history!

Is this the greatest football bet of all time? 🐐 https://t.co/xNBGRmriPA

This particular bet was dangerously close to being filed under 'near misses' or 'ones that got away' when it comes to those elusive large accumulator wins.

Betfair reported that one punter had increased the balance figure on his account by 1,000x with an in-play punt and early cash out on a staggered bet.

Before AC Milan's comeback over Verona, an 11-fold was placed including the Italian giants, who overcame a first-half 2-0 deficit to win 3-2 in a rather stunning fashion.

But this wasn't just where the drama ended, the bet eventually went on to lose but this alert punter would later cash out while Tottenham led Newcastle 3-1 for a cushy £10,000 return. Had they not done, Villarreal's shock defeat to Osasuna would have caused heartbreak and we wouldn't even be speaking about the story right now!

🤯 It was a lively Sunday for one Betfair punter who scooped just over 10k from £10!

⏰ Placing the bet in-play before Milan's comeback, they cashed out later with Spurs 3-1 up and Villarreal drawing 0-0.

👏 It proved to be the right call as Unai Emery's side went on to lose. https://t.co/6LxWIDVKoV

Not only did the 22-year-old give himself an additional surname after earning superstar fandom at the Copa America while representing La Roja, the former Nottingham Forest man forced one bookmaker's hands after a remarkable start to the campaign.

Before a ball was kicked this season, Sky Bet priced Brereton up at a whopping 1000/1 to score 20+ league goals. Rovers fans flooded to back the special - including our very own @AnthonyEadson - which following a quick-fire start that saw him net 10 in just 11 games, caused the priced to shorten to just 6/5 and forced the bookie to offer a 'manual cash out' option to the value of 50% of their overall potential winnings.

For some, the possibility of an injury-related absence or January transfer departure proved too great and left them taking money early. While others let the bet ride and reaped the full rewards after Diaz hit the 20+ league goals mark on 29th December last year.

With stakes ranging from 20p to £20, Ben Brereton Diaz will have etched himself into Blackburn Rovers folklore for a very long time!

To the disappointment of many I've cashed out the 500/1 on Ben Brereton.

Brian and Jordan Sayward-Jones - a pair of West Ham supporters - were watching their beloved Hammers thump Aston Villa 4-1 in their own backyard when the perfect day was rounded out by a sensational winning bet.

The bet consisted of two Premier League Bet Builder doubles; one from Aston Villa vs West Ham and the other from Norwich vs Leeds. Both punters predicted bookings for Kenny McLean and Jack Harrison in the day's early kick off, while expecting Pablo Fornals and John McGinn to be cautioned in the game they were attending.

A card for Fornals and McGinn was priced up at 33/1 with Bet365, with the same bookmaker offering 110/1 for the unlikely duo of McLean and Harrison to be carded. Unfortunately for 365, they would eventually have to pay out an accumulative total of £192,325.00 between the two punters.

Given the October 31st timestamp, these two clearly chose treat over trick in the traditional Halloween custom!

On December 6th, many of us would have been out shopping, trying to stay in front of the never-ending Christmas shopping lists. For @Luke__Rhodes, a Non-League footballer and bettor, all of his pre-holiday concerns flew out of the window with this juicy winner.

Wagering a £25 stake, Luke was feeling incredibly specific and opted for Demarai Gray to score the third goal in Everton and Arsenal's meeting at Goodison Park. He also fancied the Everton freebie to pick himself up a booking too, which Bet365 priced at 860/1 in-play on the double.

Low and behold, late drama ensued and saw Gray fire his side ahead during injury-time which caused all kinds of pandemonium in the ground as the Blues looked to have grabbed all three points from an in-form Gunners team.

And before I imagine Luke had time to process his thoughts on the last-gasp winner, Gray, who could barely contain himself after his peach of a strike looked set to earn his team a vital win, had already whipped off his shirt in pure joy.

Delight for the pair of them as Rafa Benitez's side earned a first victory since September and Luke netted £21,525.00, but dismay for Arsenal and their travelling supporters.

And sticking with Luke's winnings, another win on 12th January meant that he certainly felt no post-Christmas hangover either!

Placing a £25 stake again, he opted for another double - this time heading over to Italy for the clash between Inter Milan and Juventus.

The Italian Super Cup was the event, and he fancied another in-play bet that offered astronomical odds a specific goal scored and a card - with the difference on this occasion being for it to happen in extra time.

Substitute Alexis Sanchez fired Inter to the trophy in injury time, just like Demarai Gray had done previously, and the excitement of his celebrations cost him a booking, too.

Had any big wins or near misses this season? We'd love to hear about them! Drop us a line at @BettingOddsUK on Twitter to tell us exactly what happened. 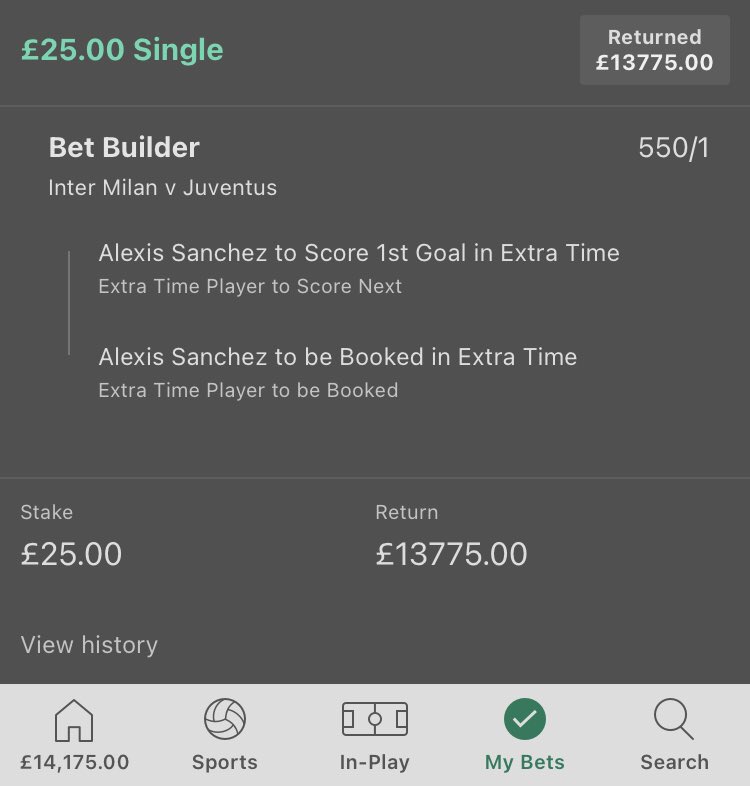 22:59 PM - 12th Jan 22
144
3962
Opt-in
Sign-up to receive emails when new additions are made to the Opta Tool
Sign-up
By clicking opt-in you agree to our privacy policy and terms and conditions below
Opt-in
Your Details
Complete your details below to enter:
Full Name
Email
SUBMIT
Please fill in both your name and email
Opt-in
SUCCESS!
Thank you for your submission.