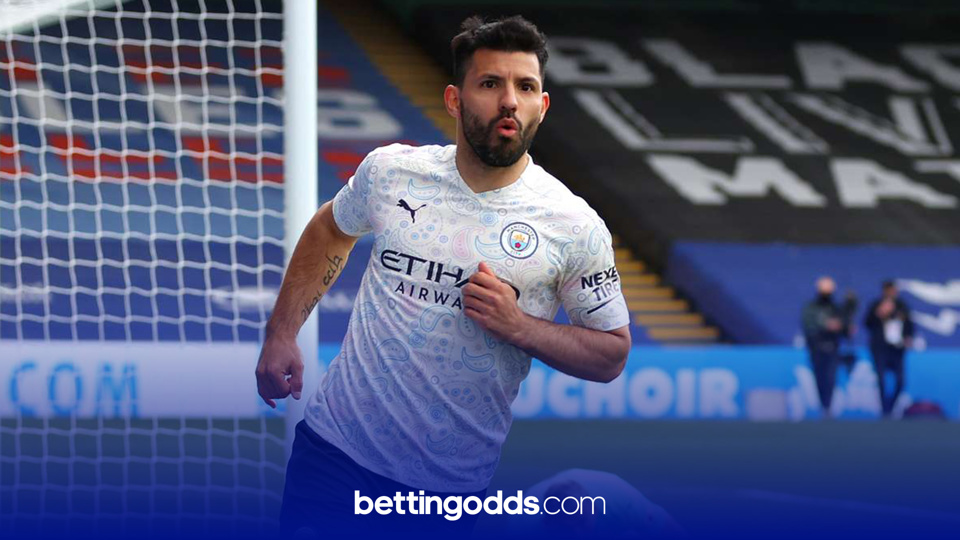 Betting Stories: Sergio Aguero's goal against Palace helped get this bet over the line
By Callum Pragnell
10:19 Wednesday 5th May 2021 - 2 minute read

The anonymous punter staked £1 on the outlandish bet, placed at a Coral shop in Breck Road, Liverpool, which returned a colossal £374,000 after all seven of his predictions came in.

In one of the games, Sporting CP scored two late goals against Nacional - including a 92nd minute penalty - after being held to a goalless draw with just seven minutes left on the clock.

In another, recently-crowned Italian champions Inter Milan scored in the 92nd minute and Romelu Lukaku had a goal ruled out against Crotone to see that the 0-2 correct score would land in Saturday’s Serie A clash.

The plucky bettor, who is a Liverpool native but wishes to remain anonymous, said of the win:

“After the first two results came in and I realised the bet was still alive, I began to follow the other matches, and it wasn’t easy following the results from around Europe, especially as each one became a winner, I got more and more nervous.

"There were late goals in a couple of the games, which only added to the nerves, and when the seventh result came in, I couldn’t believe it, and even when I checked with the staff in the shop and they confirmed it was a winning bet, I had to pinch myself!

“I didn’t get much sleep for a couple of nights, and even now it’s only just sinking in. This is a life changing amount, and while we’ll be investing lots of it, we’ll also celebrate in style.

"I do follow the football around Europe, and I like to place a £1 bet on the football most weekends, sometimes it’s just a double or treble, but last weekend for some reason these seven matches all caught my eye, but I could never have imagined winning so much money, this really is my bet of a lifetime,” he added when speaking to Coral.