It was a day of near misses for a lot of punters this weekend, as an unpredictable set of football results threw acca's across the country into disarray.

None more so than this agonising near miss, where Lille's second half turnaround in the Ligue 1 title-battle cost one bettor a £3,472 payout from a very modest stake. The bet itself is a bizarre one on the face of it, a treble made up of three pretty random selections.

Two of the legs were the same: A team to win both halves of their respective fixtures whilst also having more corners in each of those halves. Borussia Monchengladbach kicked things off smoothly with a routine 5-0 win over Arminia Bielefeld, a game which they led 3-0 at the interval; had registered two corners to their opponents' none before scoring two more goals as well as out-cornering Bielefeld 2-1 after the break. Job done, a 12/1 winner in the bag.

At the very same time, over in Italy Cagliari and Roma played out a five-goal thriller in Serie A, with the hosts edging proceedings 3-2 to keep them above the drop zone on goal difference, in turn settling the 'Over 2.5 goals' leg of this treble.

With two selections home and dry, focus turned to the standout tie in the French top-flight as Lyon welcomed Lille to the Parc Olympique. The bet needed Lyon to win both halves and have the most corners in both halves - just like the Monchengladbach clash earlier in the day. Things got off to a flyer, Lyon went two goals ahead in the first half an hour and registered twice as many corners as Lille did (4-2) by the time the whistle was blown for half time.

The corner count kept rising for the hosts into the second 45, too, but when Jonathan David found the net for the visitors on the hour mark, it left a lot for Lyon to do in the final 30 minutes. With no more goals scored as the clock ticked closer to full time it looked to be all over, before Burak Yilmaz cemented things with a goal in the 85th minute.

A huge blow for this punter, who came painfully close to a hugely impressive bet win. Better luck next time. 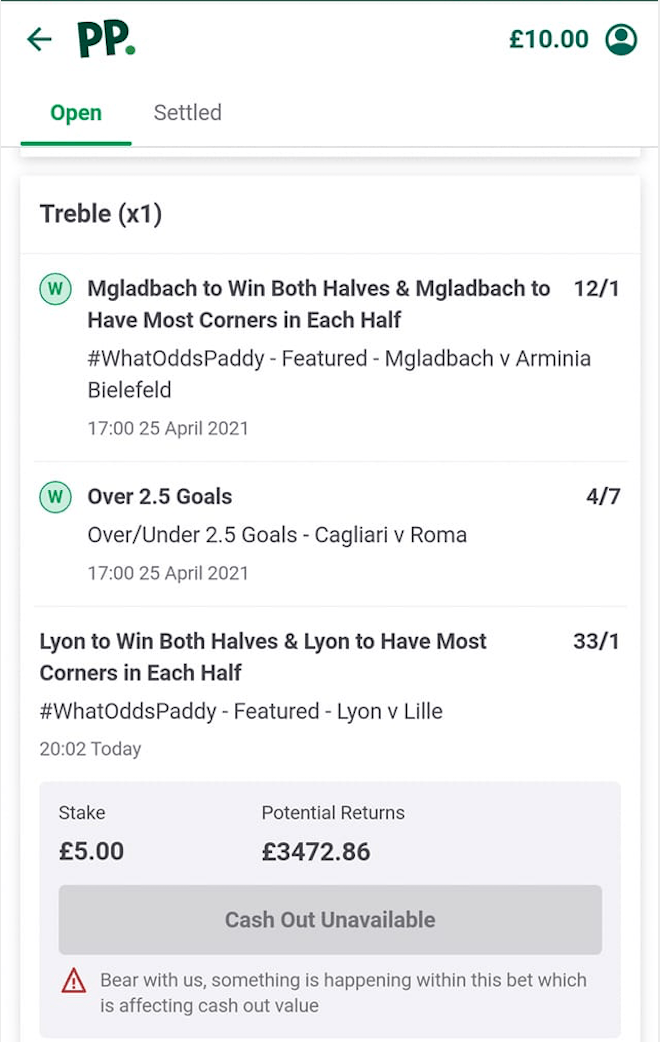