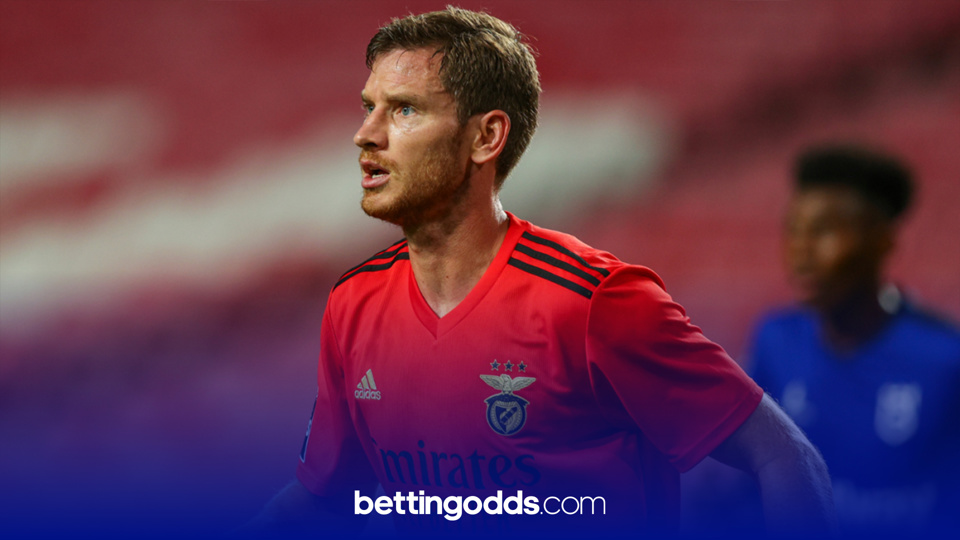 Arsenal are just one of five clubs Jan Vertonghen has been sent off against and the former Spurs defender features in our 20/1 selection for the game
By Anthony Eadson
17:55 Wednesday 17th February 2021 - 3 minute read

Arsenal take on Benfica in the Europa League round of 32 on Thursday, although this fixture will take place in Rome due to Covid travel restrictions and quarantine periods. The second-leg which was originally scheduled to be played at the Emirates will take place in Piraeus, Greece.

We’ve got three football tips for the game from our man @AnthonyEadson which despite being in Rome is Benfica’s home leg. Away goals still count despite the venue changes and the Portuguese outfit are 2/1 to win on Thursday, with Arsenal priced at 13/10 with most firms.

Mikel Arteta will most likely be without Kieran Tierney and Thomas Partey with this game coming too soon for the pair. Pierre-Emerick Aubameyang should start despite picking up a slight knock against Leeds at the weekend where the Gabon forward bagged himself a hat-trick.

Luis Miguel Afonso Fernandes, otherwise known as ‘Pizzi’, is the current joint top-scorer in this season’s Europa League with six goals along with Yusuf Yazici of Lille. If the midfielder starts on Thursday I’ll be having a punt on the 11/4 for him to get on the scoresheet anytime in the match.

Not always a regular starter in the Primeira Liga, the 31-year-old was a shining light during the group campaign. Two of his six appearances actually came as a substitute and he is averaging a ridiculous 2.04 goals per 90 minutes in this format this season. Three of his goals came via the penalty spot which only adds more strength to this 11/4 selection on Thursday.

Cuneyt Cakir will be the official in charge in Rome and he averaged 4.00 yellows per game across six champions league games last season. This term Cakir has taken charge of three matches with an average of 3.33 per game and I’m fancying him to brandish a card to Diogo Goncalves in this first leg clash, which is currently available at 7/2 with Betfair.

Benfica currently have two of their right-backs sidelined in Gilberto and Andre Almeida which means Diego Goncalves will start in that position. Last season Goncalves went out on loan and was booked nine times in 27 appearances for Famalicao. Goncalves has made eight appearances in Liga NOS this season and has been carded twice, although seven of his appearances came from the bench. He’s also been booked once in his three Europa League games this season, again with one of those coming from the bench.

I’ve also picked out a longshot for the game which pays 20/1 with bet365. Besides Diogo Goncalves, I’m also fancying former Tottenham defender Jan Vertonghen to pick up a booking. The 33-year-old has been booked three times in his career against the Gunners and they are one of only five teams he has ever been sent off against. Not always a prolific receiver of cards, Vertonghen has picked up three yellows this campaign for Benfica and with a place in the last 16 at stake, I think he looks a reasonable price against his former rivals.