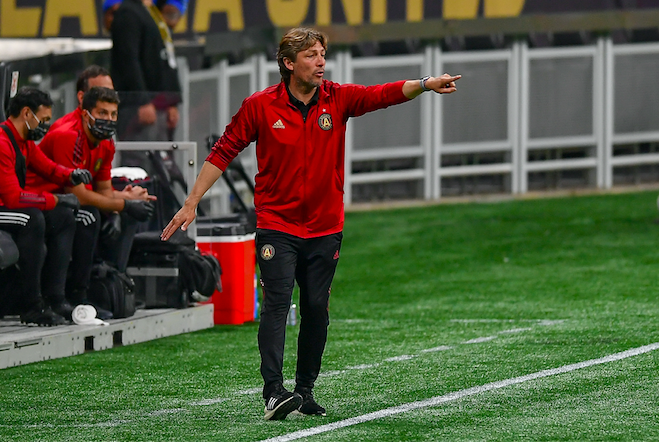 When Atlanta United appointed Gabriel Heinze on a two-year contract in the week leading up to Christmas, the 2018 MLS Cup winners were confident that they had secured the services of a managerial gem.

"Gabriel is one of the top coaches in South American soccer and we are delighted that he chose Atlanta United."

There was an expectation that Heinze could enhance Atlanta tactically; mould them into an attack-minded, high-energy, stylish and successful side.

Fast-forward seven months and the journey is over after Atlanta opted to relieve the head coach of his duties following an underwhelming start to the 2021 season, with assistant Rob Valentin taking over on an interim basis.

“A variety of issues relating to the day-to-day leadership of the team led the club to this decision,” revealed Eales in a club statement.

In total Heinze oversaw just 17 games - winning four times - including two wins from 13 regular season games this term. The 43-year-old was unable to impose this style of football in Georgia and now leaves the club 10th in the Eastern Conference.

Heinze had not only come under pressure at Five Stripes due to poor results - a run of eight games without a win spells trouble for any manager - but his controversial decision to freeze out popular player Josef Martinez inevitably backfired.

The hopes of an exciting brand of compelling football never came. Instead, injury-hit Atlanta have looked short of ideas, lacked creativity, and starved their fans of wins. Meanwhile, Eales’ aforementioned comments indicate the club had lost faith in Heinze from a leadership and man-management perspective.

Heinze will be gutted at how the last seven months panned out, but the former Man Utd defender is a confident character who previously proved his managerial qualities in his homeland and will look to bounce back from what is likely to only be a minor blip on his managerial journey.

Atlanta, who were previously managed by ex-Crystal Palace boss Frank de Boer, are determined to get their next appointment spot on.

“It's about the accessibility to the fans, with the media, with our staff here, it’s about carrying yourself in the right way,” Eales said. “There’s so many factors that go into it.

“It’s going to be really important we do our due diligence and that we get someone that understands when you’re working for Atlanta United, there’s a number of boxes to tick.”

Former West Ham player Jack Collison is currently in charge of Atlanta 2, who play in the USL Championship, but is unlikely to be a candidate for the top job.