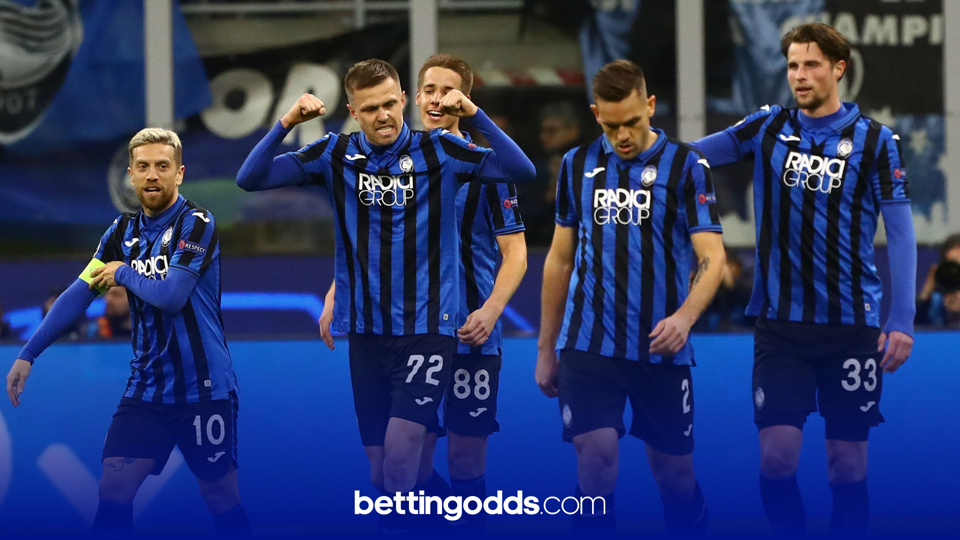 80% of Atalanta's victories this season have featured BTTS and we're fancying the boys from Bergamo as part as our football tips on Tuesday
By Anthony Eadson
17:53 Monday 2nd November 2020 - 5 minute read

It’s the final round of Champions League fixtures until after November’s International break this week and Liverpool travel to Bergamo to face one of the surprise packages of last year, Atalanta.

With two attacking teams on show, we should be in for an exciting clash and we’ve got three football tips for the game, which kicks off at 8pm and can be seen live on BT Sport.

It’s not an ideal time for Jurgen Klopp to be facing a side such as Atalanta with his current injury list. Joel Matip, Thiago and Naby Keita will be assessed before the game, but Rhys Williams is expected to partner Joe Gomez at the heart of the Liverpool defence with Nat Phillips being ineligible for Champions League selection in the absence of Virgil Van Dijk.

Atalanta have not reached the highs of last season with their performances this campaign and are the outsiders with the bookmaker, priced at 23/10 for the win with Betfair. The draw is available at 3/1 with three points for the Premier League Champions priced at 11/10, an implied probability of 48%.

Atalanta v Liverpool
Alejandro Gomez 2+ shots on target
11/4
This selection has landed in 50% of Gomez's fixtures this season with 11/4 odds implying only a 27% chance. Up against a tougher opponent in Liverpool, but with five goals, three assists, and 12 shots on target this season he could be dangerous against The Reds
Odds correct as of 2020-11-02 17:15 Odds subject to change.

The first of three selections I’ve opted for on this Champions League Tuesday is Atalanta’s Alejandro Gomez to have two or more shots on target. The good folk over at Paddy Power have given this a boost to the very backable price of 11/4.

The 32-year-old Argentinian has been in good form this season, racking up five goals and three assists from the eight games he has featured in this season. Having a look at his data for shots on target and Gomez has landed at least one on target in all of his eight fixtures so far, with at least two landing on four occasions.

Yes Gomez will be up against a higher standard of opponent in Liverpool on Tuesday evening, but with this selection having landed in 50% of his fixtures so far, it does give some appeal to the 11/4 showing from Paddy Power which is only an implied 27% chance of landing.

Atalanta to win & both teams to score
7/2
Four of Atalanta's five wins this season have seen both teams find the back of the net Jurgen Klopp has lost on all three visits to Italy with Liverpool in the Champions League
Odds correct as of 2020-11-02 17:20 Odds subject to change.

As I mentioned above, Atalanta may not have been performing to quite the levels which they were achieving last season at the start of this new campaign. They are still a side with tons of attacking talent and I’m actually fancying them to beat Liverpool and both teams to score on Tuesday.

This selection is currently top priced with both Betfair at 7/2, which could look big odds come full-time when you consider that Liverpool have lost all three of their most recent away games in Italy. Two of those defeats came at the hands of Napoli with the other coming against Roma with the it certainly not being the most happy of hunting grounds for The Reds. Liverpool have won their last four games since the injury of Virgil Van Dijk but I think this will be a much sterner test for their new make-shift backline compared to what they have faced over previous weeks in the Premier League.

Atalanta have won five of their eight games so far this season with both teams to score landing in four of those victories. The boys from Bergamo have only kept one clean sheet all season which came against Midtjylland in this competition, two weeks ago. With goals on the menu and over 3.5 goals being offered as short as 10/11 with certain bookmakers, Atalanta to win and both teams to score looks the appropriate play here.

Mane & Zapata 1+ shot on target, Rafael Toloi & Rhys Williams to be carded
55/1
Mane is averaging 1.7 shots on target per game in the Premier League this season Zapata has registered at least two shots on target in three of his six starts this season. Toloi has been booked three times in four games in Serie A this season and picked up four yellows in seven Champions League appearances last season
Odds correct as of 2020-11-02 17:25 Odds subject to change.
Champions League Betting

For the optimists out there, I’ve picked out a 55/1 longshot which consists of Sadio Mane and Duvan Zapata to have one or more shots on target, with both Rafael Toloi and Rhys Williams to be carded.

Sadio Mane has already landed 12 shots on target for Liverpool this season and is the first name into this Same Game Multi. The Senegalese forward is averaging 1.7 shots on target per game in the Premier League in 2020/21 and it should well be within his capabilities to register one or more on target against Atalanta.

Duvan Zapata is expected to lead the line for the hosts and I’m also fancying him to have one or more shots on target in the game. The Colombian has scored five goals this term and has registered at least two shots on target on three of his six starts this season.

The first of two players I’ve picked out to pick up a caution is Atalanta’s Rafael Toloi. The Brazilian was booked four times in seven appearances in last season’s Champions League campaign and also picked up another 11 yellows in 33 games in Serie A. I’m surprised to see him not shorter in the markets and the 30-year-old already has three bookings to his name in four Serie A starts this term.

The final element of this 55/1 shot is Liverpool’s Rhys Williams to be carded. I think the young centre-half could be in for a tough test against Atalanta who can cause real problems in the final third. Williams will be nervous coming into the side after Nat Phillips put in such an impressive display against West Ham on Saturday. At 5/1 he looks better priced than some of his counterparts to pick up a card.

Best of luck to those following, enjoy the game, and please gamble responsibly.

🇦🇷 Papu Gómez has 7 goal involvements in 6 games this season 🎇