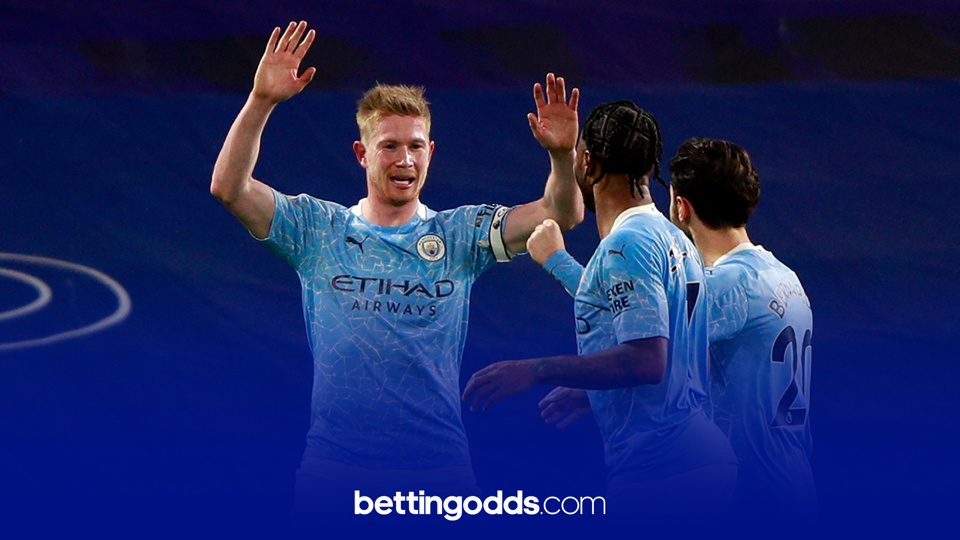 Manchester City have won their last five games at the Emirates by two goals or more and we fancy this run to continue as part of our football tips on Sunday
By Anthony Eadson
17:36 Friday 19th February 2021 - 5 minute read

With just over a third of the Premier League season remaining, Arsenal are 22 points behind Manchester City in the table. The two sides meet at the Emirates Stadium on Sunday and we’ve got three football tips from our man @AnthonyEadson who made profit on all three of his midweek previews here at BettingOdds.com

Kevin De Bruyne is expected to return to the starting line up for Manchester City after coming on as a substitute against Everton on Wednesday. Ilkay Gundogan is most likely to be named on the bench, however, as Pep’s unpredictable team sheets have been prominent over recent weeks.

Arsenal travelled to Italy to play their Europa League tie with Benfica on Thursday evening which finished 1-1. Thomas Partey didn’t travel for that game and remains a doubt for Sunday’s meeting with Manchester City.

Having won 17 games in all competitions with records being set left right and centre, Manchester City are priced at just 1/2 with most bookmakers to pick up three points this weekend. The draw can be backed at 7/2 with a win for the Gunners being offered at 5/1.

Manchester City have won their last 12 matches in the Premier League and I think they will make it 13 on Sunday quite easily and have taken them on the match handicap at -1, meaning if Pep’s team win by two goals or more this selection will be a winner. Arsenal had to travel to Rome on Thursday to play their game with Benfica that couldn’t be played in Portugal due to Covid-19 restrictions. I don’t think this trip will help their preparation to a side that has just set the record for the amount of consecutive wins in English football.

Looking back at Arsenal’s recent record at the Emirates against Sunday’s opposition, they have lost by two goals or more in all five of their most recent matches. Kevin De Bruyne should come back into the side on Sunday, a man who loves playing against the Gunners and has scored more goals against them than any other side in his career, which should only bolster the chances of City.

The boys at Betfair have also given a little boost to both Bernardo Silva and Bukayo Saka to have one or shots on target in Sunday’s game which looks a fair price at 9/2. Bernardo Silva was on the scoresheet on Wednesday evening and registered three shots in total against Everton. A player who has seen more game-time lately, the Portuguese attacker has seen 65% of his shots on target in all competitions this season come since the 9th of January. Bernardo has landed a shot on target in four of his last six games and I’m surprised to see him priced at odds-against for one at the Emirates.

Bukayo Saka is another player who managed to register numerous shots on target in their midweek fixture with the 19-year-old hitting to against Benfica. A shining light at times for Arsenal this season, Saka is averaging 0.9 shots per game in the Premier League and has registered 10 shots on target in his last eight starts. Mikel Arteta’s team won’t get many big opportunities on Sunday but if they do I can see it falling to Bukayo Saka who often seems to create his own chances.

My longshot for Sunday pays 45/1 with Paddy Power and consists of Kevin De Bruyne to score, Phil Foden to have two or more shots on target, with David Luiz to be carded.

As I mentioned above, Kevin De Bruyne loves playing against Arsenal and has in fact scored more against them than any other opponent in his career. That’s five times in total that the Belgian has netted against the North London club and with him being the most likely penalty taker on Sunday I’m starting off this Same Game Multi with last season’s player of the year to score.

Phil Foden has been a delight to watch at times this season and has already faced Arsenal twice this season, once in the league and once in the EFL Cup. Foden registered two shots on target in both of those games and has proven pedigree when playing against the ‘big-six’ sides over the last couple of seasons. The 20-year-old has been in good form in recent weeks and has registered five shots on target in his last three starts with 2+ landing in three of his last six.

David Luiz has given away more penalties and been given more red cards than any other player in the league since August 2019. The central defender has been given four yellows and one red card against Manchester City in his career. The former Chelsea man has picked up three cards in all competitions this season but I’m leaning towards him picking up his fourth against a team he has often struggled against in the past.

That’s 6/4, 9/2 and 45/1 picks altogether, best of luck to anyone following on Sunday. Manchester City have been a joy to watch in the last couple of months so let’s hope for an entertaining game this weekend. Please always gamble responsibly.