Arsenal v Chelsea Tips: Zouma the stand out selection in the shots market 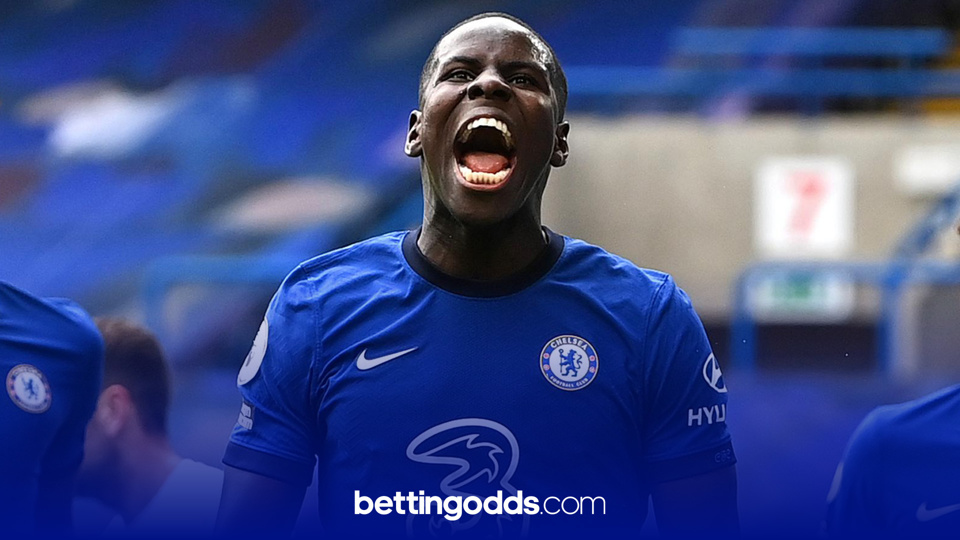 Kurt Zouma has registered a shot on target in 54% of his league games this season and features in our tips for Arsenal v Chelsea
By Anthony Eadson
17:26 Wednesday 23rd December 2020 - 4 minute read

It’s now seven games since victory for Arsenal and Mikel Arteta and there’s no let up with the visit of Chelsea to the Emirates on Boxing Day. The game is live on Sky Sports main event kicking off at 5:30pm and we’ve got three football tips as part of our Boxing Day bonanza here on BettingOdds.com

Arsenal will be desperate to have Pierre-Emerick Aubameyang after the forward has missed the last two games with a calf issue. Gabriel Martinelli came off injured midweek against Manchester City, while Thomas Partey also remains sidelined.

Hakim Ziyech is a confirmed absentee for the visitors, while several players are doubts, including both full-backs Reece James and Ben Chilwell. Callum Hudson-Odoi returns from injury but will most likely only make the substitute bench.

At 10/11 Chelsea are the odds-on favourites for this game with an implied 52% chance of victory. The draw can be backed at 13/5 with a priceless win for the Gunners available at 3/1.

A player I feel who gets overlooked on occasions in the shots on target market is Chelsea’s Mason Mount and I’m backing the midfielder to have one or more against Arsenal at the price of 6/5 with Paddy Power. Arsenal are on a rotten run at the moment and I see Chelsea doing the majority of the attacking. I don’t expect Frank Lampard’s side to sit back in this game, with a good opportunity on the table to close the gap on the teams above them.

Mason Mount has registered nine shots on target this season from the 12 games he has started in the Premier League. Known to like a shot from distance, the 21-year-old averages 1.9 shots per game, with only Timo Werner having a better ratio for the Blues. Another potential bonus here is that Reece James is a doubt for the game with a slight knee issue. This could pave the way for Mount to replace James on free-kick duty which would only bolster our case for him to have a shot on target at the Emirates.

Kurt Zouma is a player with four goals to his name in the league this season and I’m backing the central-defender to have a shot on target on Saturday. When it comes to shots on target, Zouma has registered seven in total, all of which came in separate games. With Chelsea’s centre-back pairing of Kurt Zouma and Thiago Silva having six goals between them this season and this selection landing in 54% of Zouma’s league games I’m happy to get involved. 19/5 is on show from Coral at the time of writing, with Betfair and Paddy Power both going 9/4.

I’ve also opted for a shots on target double with both Mason Mount and Bukayo Saka to have two or more shots on target. This looks rather generously priced at 81/1 using the Same Game Multi feature with Paddy Power.

As mentioned in my first selection, I think Mason Mount could well be on free-kicks for Chelsea should Reece James fail to get over his knee issue. With Mount already twice registering at least two shots on target in the league this season he looks a reasonable price at 8/1 to hit the target twice against Arsenal.

No player at Arsenal has taken more shots in the league this season than Bukayo Saka. The youngster has been one of the shining lights in a team that has under performed in the first third of the campaign. Saka is averaging 2.1 shots per game in the Premier League and two shots on target does not look out of his capability. At 81/1 I feel we are getting a good price here on what looks an attractive small stakes play.

There’s plenty of sporting action over the festive period so please remember to stay in control. Enjoy the game and please gamble responsibly.

That's as many as Sadio Mane, Riyad Mahrez and Timo Werner, and one more than Marcus Rashford 👀