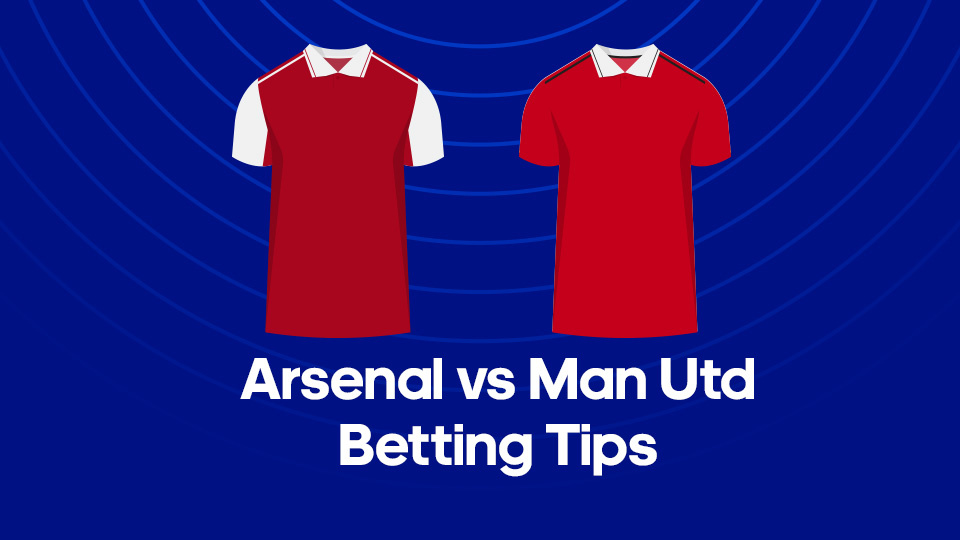 Live on Sky Sports, leaders Arsenal host Manchester United in the Premier League this Sunday at the Emirates Stadium.

Tipster Wizard has previewed the match and provided his two best bets...

Arsenal sit top of the Premier League table with 47 points, 5 points clear of Manchester City who are in second place.

Mikel Arteta’s men continued their fine run in the league as they beat rivals Tottenham 2-0 away from home last week, extending their unbeaten run to 12 league games.

They are one of the only two teams in the league to be unbeaten at home, winning 7 and drawing 1 of their 8 league games here as they have turned the Emirates Stadium into a fortress.

As for the visitors, they sit 3rd in the league table with 39 points after a fine run of 9 wins in a row was halted by Crystal Palace courtesy of an injury time Michael Olise free kick that denied United all 3 points.

A bigger blow was influential midfielder Casemiro getting his 5th yellow card of the season which meant he will miss this crucial clash against the league leaders.

However, Ten Hag’s men will still be full of confidence heading into this game off the back of their 10 games unbeaten run in all competitions and it would be harsh to underestimate them after they recently beat the Champions Manchester City at Old Trafford.

A mouth-watering clash awaits us, and as usual I have you covered with 2 of my best betting angles below:

Gabriel Jesus & Reiss Nelson are out for Arsenal while Elneny is doubtful.

Arsenal are unbeaten in their last 12 league games and are yet to lose a single game at home where they have collected to total of 22 out of 24 possible points.

They beat Manchester United 3-1 here last season and with the visitors missing a key player in Casemiro, it is hard to see the hosts lose this game so I am including Arsenal double-chance in the betbuilder.

As for our 2nd selection, Odegaard has had at least 1 shot in every game this season (17/17) and is in fine goalscoring form scoring 4 goals in his last 5 Premier League starts.

For our 3rd selection, Bruno Fernandes averages 2.2 shots per game in the league and has had at least 1 shot in his last 10 league games in a row.

For our final selection, Arsenal average 19.1 shots per game at the Emirates and have hit at least 10 shots in every home game this season (8/8). Combining these 4 selections gives us a solid bet365 betbuilder @ 4/5 and I am happy to stake 1pt on that as our main bet for this game.

Odegaard is Arsenal’s top scorer with 8 goals and is in sensational goalscoring form having scored 4 goals in his last 5 league appearances including a cracking derby goal against Tottenham last week.

As for Bruno Fernandes, he is Manchester United’s joint most booked player with 5 yellow cards and averages the 2nd most fouls per game after Casemiro who is suspended.

Combining these 2 selections gives us a cracking longshot @ 16/1 with BetUK and I am happy to stake 0.25pt on that as our 2nd bet for this game.

Bet £10 get £30 in Free Bets
#AD New customers on mobile only. 7 days to claim and stake £10 minimum bet at odds of 1.5 or greater to qualify. Free, void, cashed out or partially cashed out bets do not qualify. Max 3x £10 free bets credited on bet settlement. Free bets must be used on 4 or more selections with selection odds of 1.3 or greater. Free bets are non-withdrawable, and stake not returned with winnings. 7 day expiry. 18+BeGambleAware.org. T&Cs apply.
Bet £20 & Get It Back As Cash If It Loses
#AD New customers only. Place your FIRST bet on any market at odds of min 2.0 (EVS) and if it loses we will refund your stake in CASH. Max refund for this offer is £20. Only deposits made using cards will qualify for this promotion. T&Cs apply, 18+ begambleaware.org
Bet £10 & Get £30 In Free Bets
#AD 18+ New Customer offer. Place a min £10 bet on the Sportsbook on odds of min 1/2 (1.5), get £30 in Free Bets. Rewards valid for 30 days. SMS verification required. Only deposits via cards will qualify. T&Cs apply. Please Gamble Responsibly.
Bet £10 Get £40 in Bonuses
#AD New 18+ UK customers only. Register using the promo code WELCOME40, deposit and place first bet of £10+ on Sports (cumulative Evens+) within 7 days of registration. First bet must be on Sports. £30 in Free Bets and £10 in Free Spins (50x20p) credited within 10 hours of bet settlement. Free Bet stakes are not included in any returns. Bonuses have a 7-day expiry. Payment restrictions apply. SMS verification and/or Proof of I.D and address may be required. Full T&Cs apply.
Money back As A Bonus Up To £40 If Your First Bet Loses + £10 Casino
#AD 18+ begambleaware.org. New customers only. Min deposit £10. Money back as bonus if first sports bet loses. Wagering requirements: sportsbook 3x at min. odds of 1.40 (2/5), casino 50x. Unless forfeited the sportsbook bonus must be wagered before using the casino bonus. Bonus expires 7 days after opt-in. Visit Unibet.co.uk for full T&C's.
100% Profit Boost up to £100 (Mobile Only)
#AD New UK customers only. Claim by placing a min deposit £10 via "My Offers" page within 30 days. Skrill/Neteller deposits excluded. 7 days to stake max £10 in-play. Max. extra winnings £100.T&C's apply, 18+ begambleaware.org
Free Bets & Free Betting Offers