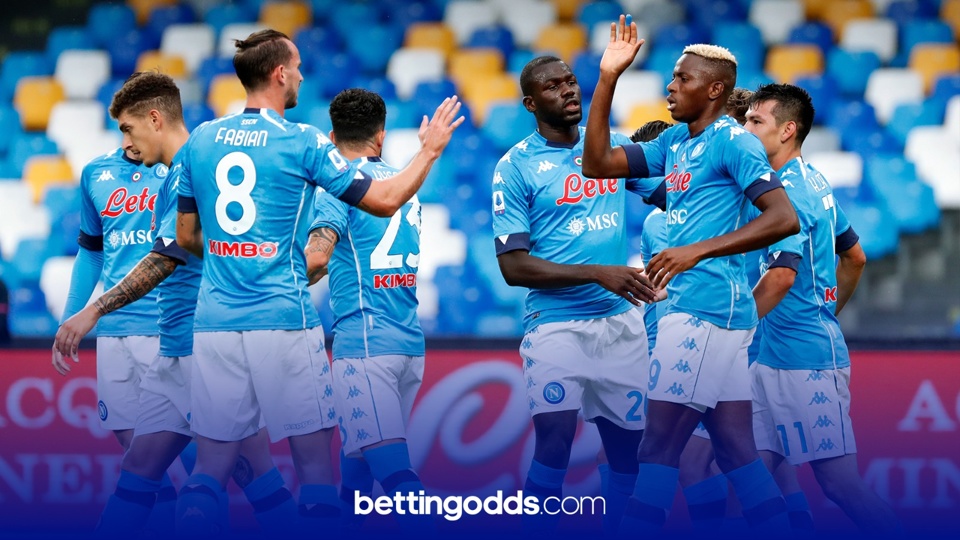 The cynosure of this weekend's Italian action takes place on Sunday evening as AC Milan welcome their former stalwart Gennaro Gattuso’s Napoli side to the San Siro.

Inconsistency has been rife for the well rested visitors as Gattuso’s men have won 14, drawn four and lost eight of their 25 league games since the turn of the year. A lengthy injury list could be to blame for this, however, it looks like Napoli are back to full strength now and could field a similar side to the one that beat Bologna in their last fixture. The only uncertainty lies in who will get the nod upfront with both Dries Mertens and Victor Osimhen in contention for a start here.

As for the hosts, they will be hoping they can galvanise the momentum they gained from a late equaliser at Old Trafford in the Europa League on Thursday with a result here. Zlatan Ibrahimovic and Ante Rebic are still out for AC Milan but Theo Hernandez and Hakan Calhanoglu should be available to start. This would see Diogo Dalot and Rade Krunic both miss out at full back and CAM.

The bookmakers are struggling to split these sides with Milan priced at around 31/20 and Napoli at 9/5. However, in terms of value, the host may be worth getting onside as they have won 48% of their games when priced accordingly whilst Napoli have only won 30%.

Alexis Saelemaekers has received a total of six cards in 25 appearances for AC Milan this campaign. That means Bet365’s price of 4/1 represents value as it indicates an implied probability of 20%, yet the young Belgian international has been carded in 24% of his appearances. It is also worth noting that the same bet is priced at just 15/8 elsewhere.

Tomorrow’s referee- Fabrizio Pasqua- has not been handing out as many cards as the majority of his compatriots in this division. However, his average of 3.63 cards per game in the eleven fixtures he has overseen is still quite a respectable average. He is also more than capable of brandishing plenty of cards as he has handed out five or more in 36% of his Serie A appearances this campaign.

This fixture also has a bit of a reputation for cards; the last three league meetings have yielded 18 yellows and two red cards. Interestingly, Saelemaekers was sent off in his penultimate appearance in this fixture after receiving two yellow cards!

Finally, this bet takes interest because Saelemaekers will be covering the visitors most tenacious character; Lorenzo Insigne. His small stature makes him a tricky opponent to contain best illustrated by the fact he has drawn six fouls in his last three starts on the left.

Piotr Zielinski’s versatility means he has featured in a number of different positions for Gli Azzurri this campaign. On Sunday, he is expected to get the nod in the number ten slot and this means that his anytime goalscorer price takes appeal. Bet365 has him at 4/1 but he is as short as 11/4 elsewhere.

Seven of the eight goals Zielinski has scored in the UEL and Serie A this season have come when he is playing CAM and in this role his attacking output increases, for obvious reasons. In his 14 appearances as a number ten, he has averaged 3.7 shots per game- he only averaged 1.95 in total- and he has found the net in half of his appearances there!

AC Milan have played seven games against the current top six sides so far this campaign. These games have averaged 3.7 goals per game, Milan have conceded a total of 17 goals and failed to keep a clean sheet in all seven games!

With the two teams so evenly priced and their recent meetings throwing up plenty of goalmouth action- 15 goals in the last five league games- I expect goals to flow on Sunday evening and I think Zielinski represents the best value.

Using Bet365’s ‘Bet Builder’ you can combine these two selections with a Diogo Dalot card at 90/1. Since returning to Italy, the full-back has received three cautions in the 588 minutes he has featured in, in the Serie A. That is a card every 188 minutes played!

With a Theo Hernandez return to Milan’s starting XI imminent, Dalot may miss out here you can back the double at 26/1 which is also of interest.

If you are backing any of these selections, best of luck and please remember to gamble responsibly!