Transfer Betting: 4 players who could be on the move this January 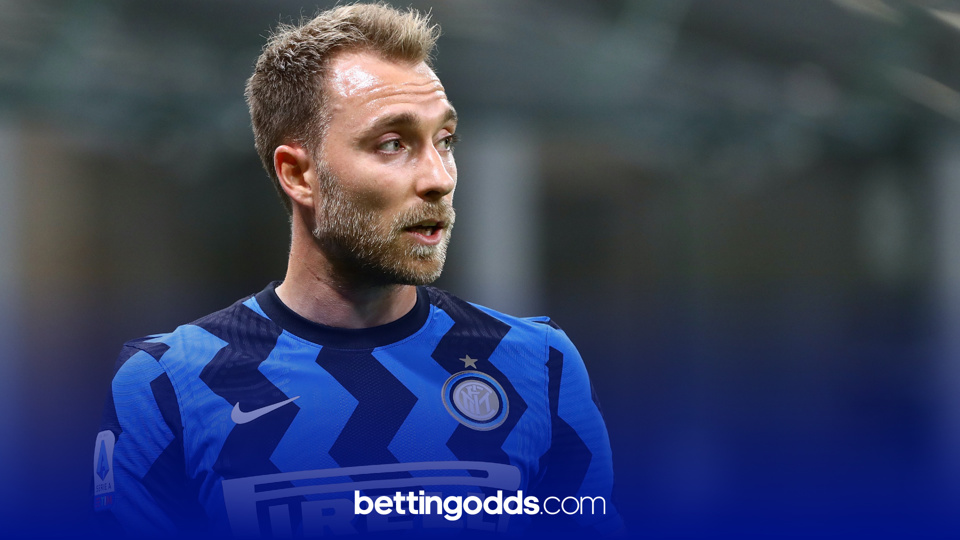 Christian Eriksen only joined Inter Milan a year ago but is being linked with a move away from the Nerazzurri this January
By Anthony Eadson
14:43 Monday 11th January 2021 - 4 minute read

The transfer window in England opened on 2 January 2021 for the Premier League and EFL. It will remain open until 11pm on 1 February 2021 and here at BettingOdds.com we’ve looked at a few potential transfers that could happen at the start of this year. We’ve listed some of the most likely based on the odds from bookmakers, however it can be sensible to err on the side of caution when punting on these markets as they can often be based around rumours.

Only one year ago Christian Eriksen joined Inter Milan from Tottenham for a fee of £17m. With just 12 league starts and one goal to his name in Serie A since joining the Italian giants, Eriksen has fallen out of favour with manager Antonio Conte and now looks to be on his way to another club. One ongoing issue is that the player’s representatives believe they are owed £6m in commission from the transfer and have filed a request for arbitration with an Italian sports court over the disputed money.

West Ham, Wolves and Arsenal have all been linked with the signature of the Danish midfielder but it is Paris Saint-Germain who are the current favourites to sign the 28-year-old before the end of the window. 888sport go 6/4 for a switch to the French capital, with Ajax currently second favourites at 3/1.

After having his contract terminated by Atletico Madrid at the end of December, Diego Costa is now a free agent and has been linked with several clubs over the last 10 days or so. Costa’s contract was due to end in June 2021 but was terminated early after the striker asked to leave the club for personal reasons.

With 52 goals in 89 appearances and two league titles with Chelsea, there’s a flurry of English clubs who would love to have the charismatic character in their squad. With Raul Jimenez out injured, Wolves have been linked with the striker, with Betfair going even-money (1/1) for him to sign before the end of the deadline. One major factor preventing this transfer however could be Costa’s huge wage demands. The Spaniard was said to be earning around £270,000 a week with Atletico and he would be asking for a similar amount from Premier League outfits.

It’s been well documented how Jesse Lingard has struggled to find form of late and as a result has played a very limited amount of matches for Manchester United over the last few seasons. The 28-year-old is yet to play a single minute of this Premier League campaign and has been linked with a move away from Old Trafford.

Sheffield United are currently just 2/1 with UNIBET to capture the signing of Lingard which would be a much welcome addition considering the Blades are yet to win a Premier League game in 20/21. David Moyes has worked with Lingard before when managing Manchester United and a switch to the Hammers can be backed at 5/2 with Betfair. It may be a loan move that is on the cards, however, with fresh tabloid-talk this morning linking Lingard with a temporary move to Inter Milan, dependent on the sale of Christian Eriksen.

Another who has been tipped for departure from Old Trafford is Paul Pogba. Although personally here at BettingOdds.com we cannot see it happening this January. Betfair have priced up the market for Pogba’s next club before February 2 and it’s Juventus who are the 11/4 favourites to capture the signing of the Frenchman and to return to his former employers who he left in 2016.

With Mauricio Pochettino now the manager of Paris Saint-Germain, rumours have been rife with Paddy Power pricing up a switch to the French capital at just 5/1, and 888 Sport offering 14/1. The Ligue 1 Champions may be one of only a couple of teams in Europe who could afford the potential eye-watering terms that Pogba’s contract would require, though, which does give some added weight to this potential move.