With the season at its midway point, BettingOdds.com have taken a look into which players could be in contention to win the PFA Player of the Year (POTY) award in a few months’ time.

While the obvious candidates yet again lead the betting - the likes of Harry Kane, Kevin De Bruyne and Bruno Fernandes, to name a few - it is not the front-runners we are looking at today.

Instead, we’ve decided to take a look at four bigger-priced fancies in the market and assess their chances of scooping the award when the campaign is finalised this May, should they retain the level of form they are each currently displaying in the top-flight.

It comes as little surprise to see Jack Grealish’s name in the frame where markets like this are concerned. The Villans skipper has continued to shine in the Premier League this season after enjoying a tremendous campaign last time out, but the difference is that this term Villa are in much better fettle compared to their situation a year ago.

Instead of battling relegation, Dean Smith’s side are in genuine contention to break into the top-six this season and could indeed be plying their trade in the 2021-22 Europa League if this form continues.

With five goals and eight assists in the league at the time of writing, the 25-year-old has been the main protagonist in Villa’s impressive season to date.

And, should the West Midlanders secure European football for the first time since 2010 in the coming months, it is Grealish who will collect the majority of the plaudits which could therefore see him be crowned PFA Player of the Year for the first time in his career.

Ruben Dias looks to be the signing of the season for Manchester City. The Portugese defender has brought much needed solidity to Pep Guardiola’s back-line, something which the club had been massively lacking since the departure of Vincent Kompany in 2019.

The 23-year-old is yet to miss a minute of Premier League action he has been fit for this season, playing the full 90 in each of City’s last 16 games. It’s clear to see why, too; this season the Sky Blues have the best defensive record in the division having shipped just 13 goals, with Dias part of a back-line which have managed to keep a clean sheet in over half of their league outings in 2020-21 (9).

The 13 goals City have conceded have come from 13.5xGA (expected goals against). That’s the best record in the league – ahead of Aston Villa (17.6xGA), while they have allowed the opposition just 35 shots on target which is 17 fewer than the next-best record, Chelsea, with 52. Tottenham, for example, have faced more than twice as many (71) - a telling sign of just how sturdier the Cityzens look with Dias in the side.

City are odds-on favourites for the league title as things stand and it is almost impossible to look past them going the distance at the minute. If they do reclaim their crown from Liverpool in the coming months then it’ll be largely due to how well they perform in defence as well as in attack - an area they have rarely struggled in even without an out-and-out striker leading the line.

Dias looks the real deal for City and his price of 16/1 represents excellent value to me. If City win the league, then it would not be surprising to see their 23-year-old centre-back voted as Player of the Year by his peers in the top-flight.

We saw it happen with Virgil van Dijk back in 2018-19 and Liverpool didn’t even win the title that season, despite coming agonisingly close, and while Dias still has a way to go to be regarded as one of the world’s greatest defenders - a title VVD has thoroughly earned during the last five years - the stats so far actually show that the Portuguese is enduring a better start to life in his new surroundings than his Dutch counterpart did when he first signed for Liverpool back in January 2018. Certainly one to keep an eye on. 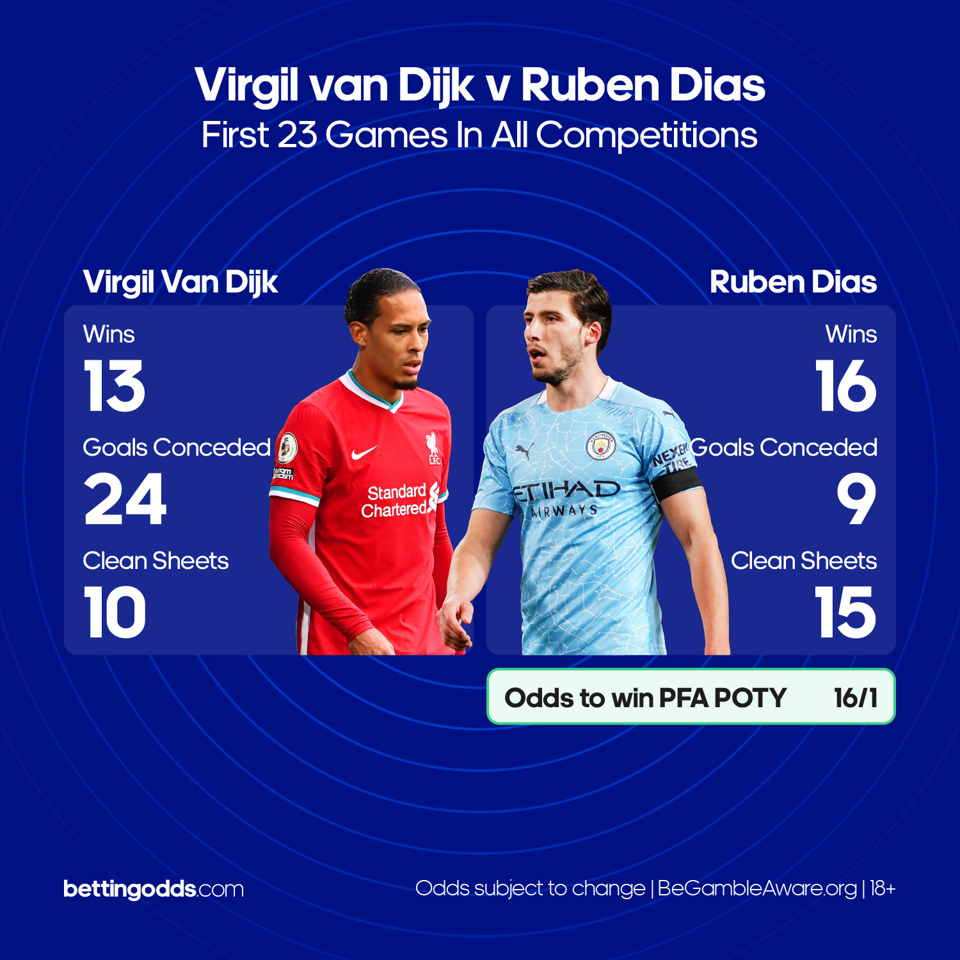 A modern-day Marmite footballer, you either love or hate Paul Pogba, but even people who sway further towards the latter emotion cannot argue with the Frenchman’s talent when he’s on song.

After a difficult few years at Old Trafford, the 27-year-old looks back to his best at the moment, last week scoring a beautiful goal to ensure United came away from Fulham with three points having initially fallen behind at Craven Cottage early on.

Despite constant transfer speculation fuelled by agent Mino Raiola, Pogba is clearly not letting any off-field issues which may - or may not - actually be happening affect his performances on the pitch right now.

United have a real opportunity to win their first league title in the post-Ferguson era this season and currently lead the way after 19 games. Pogba’s creative influence - which has seen the France international provide three goals and an assist in his last nine outings - has helped propel United to the top of the pile in 2021.

Pogba is buying into Solskjaer’s philosophy and style of play, even playing out wide on the right in recent games to ensure United’s game plan is perfectly adhered to, and it’s working. It just goes to show that when he gets his head down, there is still a very special footballer in Paul Pogba, away from the external factors that have served only to blight his career to date.

If Manchester United win the title this year, Paul Pogba will have no doubt played a huge part if, of course, the sort of performances we have witnessed from him in recent weeks continue, making his price of 50/1 in the market (it was 100/1 a matter of weeks ago) seem like quite an attractive one on the face of it.

The control, the turn, the finish.

James Maddison had a stuttering start to his season but recently he has really picked up his game, helped by the fact that he is fighting for his position in Gareth Southgate’s England squad ahead of this summer’s delayed European Championships.

With six goals and two assists in just 12 Premier League starts this time out, Maddison has been an integral part of a Leicester side who are yet again proving to be a thorn in the side of the division’s traditional ‘Top Six’. The Foxes are just two points behind leaders Manchester United at this stage and well in the mix to win their second PL title in five years, although there is still a long way to go for them to achieve such an impressive feat.

Maddison is 125/1 to win the Player of the Year award in the spring and rightly so. He is enjoying a terrific run of form at the minute - scoring three goals in his last three league outings - but the real task is being able to prolong this level form from now until the end of the campaign.

Indeed, should he continue to regularly find the back of the net and help Leicester in their quest for league dominance, his price, like the others in this list, will significantly shorten which certainly makes this triple-figure play somewhat of an appealing one at this stage.