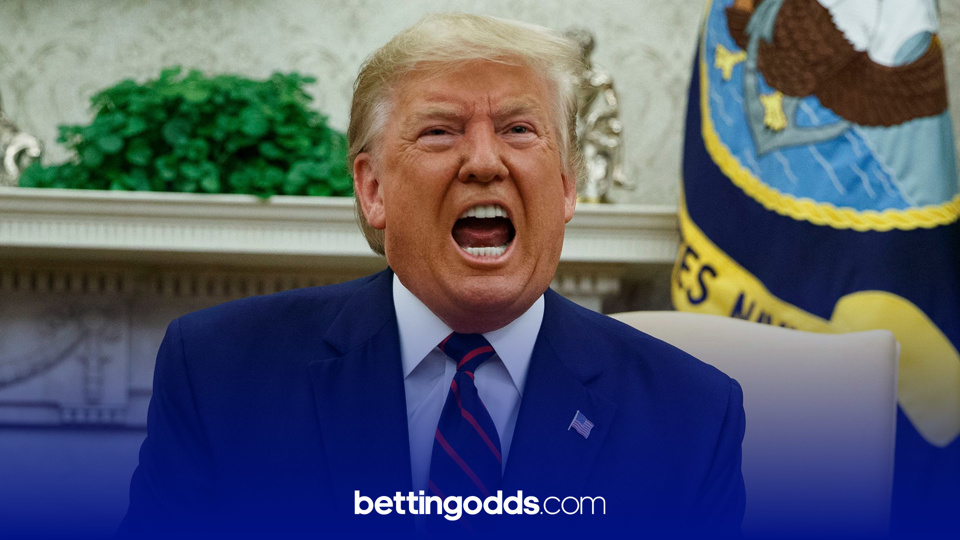 With 3 years to go until the 2024 US Presidential Election @OddsTerrier  revisits the political landscape, asks why former President Trump is leading the betting and investigates who are the other likely contenders.

The Donald has slowly dropped in price from his high of 20/1 not long after President Biden took office and is now favourite in the market at a best price of 7/2 to retake the Oval Office in 2024. But why?

The 45th President of the USA was voted out of office only 10 months ago after two impeachments, federal investigations and allegedly inciting the capitol riots. Surely he couldn’t be back in a position to take back the mantle of the world's most powerful man? Well, frankly, yes he could.

Trump has retained a huge popularity within the Republican Party and fanbase, and is the heavy favourite for the Republican nomination which would essentially put him in a two-horse race for the White House. Neither Trump or Biden has officially announced a run in 2024 but it seems unlikely that Trump wouldn’t run given his ego. He’ll be 78 by then but still 4 years younger than Biden.

With the GOP essentially still believing “The Big Lie” that Biden fixed the election and the Democrats somehow “used Covid” to rig the vote, it seems certain, barring illness, that Trump will run again and will be a serious contender given the 2 party state system of US Politics.

The main reason President Biden is so long in the betting is purely down to his age. He is 79 later this month and would be 82 if he were to run again in 2024. There is a lot of speculation that he will step down at the end of this term and pass the baton onto a younger Democratic colleague.

Current VP Kamala Harris (57), Ocasio-Cortez (32), Pete Buttigieg (39) or Amy Klobuchar (61) could be in contention for the Democratic nomination should Biden decide not to run but it's highly unusual for a sitting president to not contend a second term. Only 6 men have ever done it and the last was Lyndon B.Johnson after his handling of the Vietnam War.

However, it's not only Biden's age that is counting against him. His approval ratings are as low as 38% in the latest polls and he has given very few interviews since taking office, most of them pre-recorded. Doubts still persist about his mental state and the recent hike in gas prices is doing him no favours.

Harris was the golden girl of US politics only a short time ago. As the first black and female person to ever hold America’s second highest office, she looked a sure thing to follow in Biden's footsteps when he decided to step down due to age. However, she has been accused of being invisible in office and her approval ratings are even lower than the Presidents. In the same poll, she was 10 points lower than Biden at a miserly 28%. She would need to turn this round before any eventual run at office.

DeSantis (43) is the second favourite for the Republican nominee and should Trump choose not to run looks a likely candidate for a run at the presidency. The Governor of Florida is a close ally of Trump and is a strong critic of Covid restrictions and mask mandates.

Another Republican contender. Haley is the current Governor of South Carolina. She’ll be 52 by the time of the Election and is the former US Ambassador to the United Nations.

49-year-old film star and ex-wrestler Johnson, better known as The Rock, is a true longshot. He has previously admitted that he ‘doesn’t know the first thing about politics’. However, in a country that has form for electing celebrities over politicians you can’t discount Johnson. A recent poll found 46% of Americans would support a White House bid. Can you smell what The Rock is cooking?

The Darling of Democratic voters. AOC is the current US Representative for New York's 14th District. She is the youngest woman to ever serve in the US Congress. She is noted for her huge Social Media presence and has 12.7million followers on Twitter. Her time is yet to come and 2024 will likely be too early for a run at the biggest job.

Bald, space-chasing egomaniac. The founder of Amazon and gazilionaire Bezos has been spoken about as a future President due to his criticism of Donald Trump's time in office. More chance of him landing on Mars by 2024.

Former President Barack Obama's first lady. Michelle Obama is a successful attorney and Businesswoman in her own right. She is immensely popular in the US, recently topping the most admired woman in America for three years running. “No, nope, not going to do it,” “it’s just not for me” and “it’s not something I’m interested in or would ever do. Ever” suggests it's highly unlikely she will run for Prez.

According to the Washington Post, Ivanka is the clear favourite of Trumps’ five children. She is also extremely popular within the GOP. However, amongst the general electorate it's unclear now whether the Trump brand is an aid or a hindrance.

get offer get offer
#AD Place a min £10 bet on the Sportsbook on odds of min 1/2 (1.5), get £30 in Free Bets. Rewards valid for 30 days. SMS verification required. Only deposits via cards will qualify. T&Cs apply. Please Gamble Responsibly