Betting Insight: The top 10 most profitable teams in Europe this season

Leicester City rank top of the most profitable teams from Europe's top five league's this season based on a £10 win stake each game
By Anthony Eadson
16:17 Tuesday 6th April 2021 - 7 minute read

Most clubs in Europe have just under a quarter of their league fixtures remaining after the delayed starts due to the global pandemic. Here at BettingOdds.com we’ve decided to look at which sides have been most profitable to follow throughout this campaign.

We’ve based our results on a £10 win stake from bookmaker bet365 for each team's games this season. We’ve taken a look at the top five divisions from Europe; The Premier League, La Liga, Serie A, Bundesliga and Ligue 1.

Leicester City top the charts as the most profitable team in Europe’s top five Leagues this season. Brendan Rodgers' side sit third in the table and will be hoping they can right the wrongdoings of last year when slipping out of the top four in the final week of the season. Leicester’s 5-2 win at the Etihad on September 27 priced at 17/2 has been their biggest priced win, however consistency throughout and wins at home to Chelsea and Liverpool and away to Arsenal and Spurs have helped maintain high profits for Foxes backers.

Cadiz +£179.00
Alvaro Cervera’s Cadiz have proved to be the most profitable team in La Liga this term and rank second in our top ten from across the continent. Promoted back to La Liga last summer, Cadiz managed to pull off 1-0 victory away at Real Madrid in October, priced at a monumental 14/1. They achieved their first ever win over Barcelona in a 2-1 victory priced at 11/1 in December and it’s those two shocks that leave them so high in the profitability table this term. 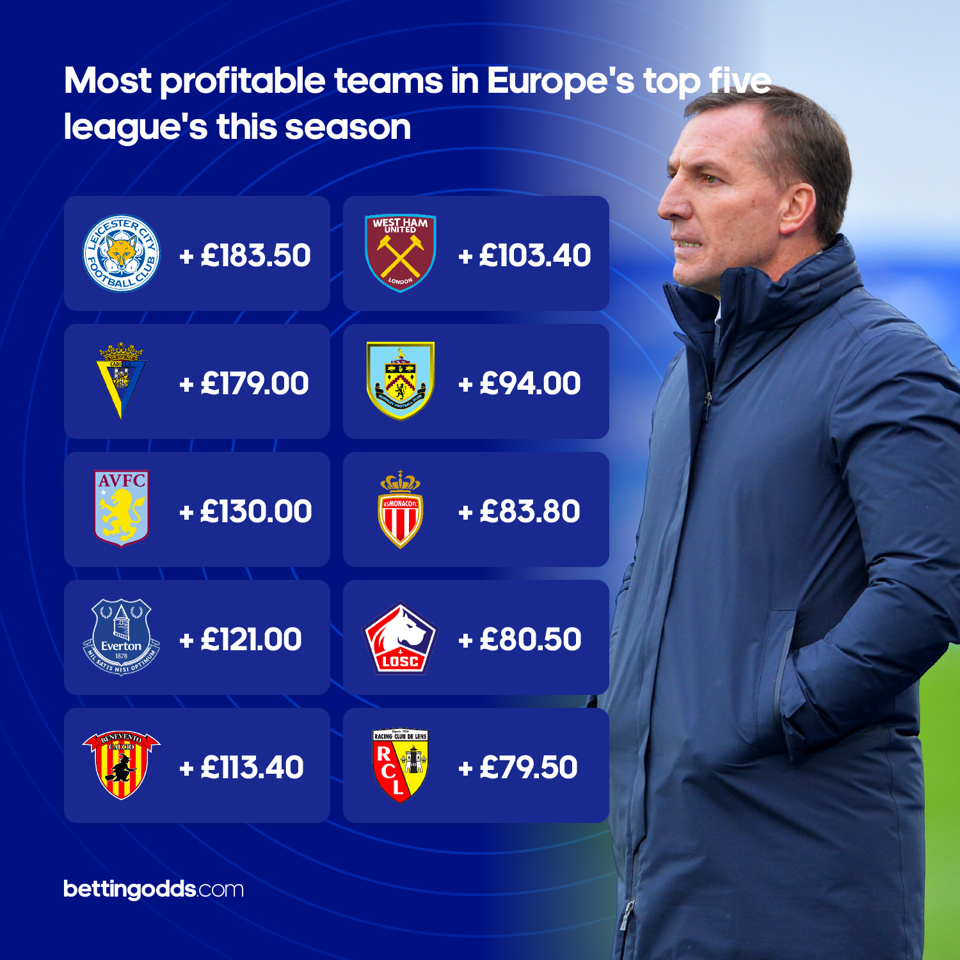 Liverpool’s 7-2 defeat to Aston Villa feels like a lifetime ago, but that victory for Dean Smith’s side was the catalyst for them in the first half of the campaign which led many to believe they could have been in for a Europa League place at one point. The Villa were 6/1 to beat the Premier League Champions in October and away wins at Leicester, Southampton, Leeds, Arsenal and Wolves have kept their profit nicely topped up.

Away wins have been on the rise in the Premier League this term and Everton’s first win at Anfield since 1999 has been one standout highlight for Toffees fans this season. That 7/1 victory was the biggest price W of their campaign but wins against Spurs, Chelsea, Arsenal and Leicester have all contributed to them being the fourth most profitable team in Europe’s top five divisions.

Another team who were promoted to the top flight last season, Benevento are the first and only Italian side to make the top ten. Filippo Inzaghi’s men had gone 11 games without a win in Serie A before they masterminded the biggest priced result of the season, beating Juventus in Turin 1-0 at a massive 16/1.

Hammers fans are enjoying one of their best seasons in recent times as David Moyes’ side sit fourth in the table with just eight games remaining. It’s rather surprising to see West Ham rank 6th in Europe’s top five leagues for profit when you consider that they have only once beaten a ‘big-six’ side this season in Tottenham. If the Premier League table was based on just home results, West Ham would be second and their consistency against clubs below them, particularly at home, sees their profit remain in three figures from a £10 win stake each game

The third Premier League team to play in claret and blue and appear on this list is Burnley. Four away wins this term have led to Sean Dyche’s men making Europe’s top ten for profitability. Merseyside has been a happy hunting ground for the Clarets this season with wins over Liverpool (9/1)  and Everton (16/5). Burnley were the only team to pick up a point at Anfield in the league last term and ended Liverpool’s run without a league defeat on home turf which stretched back to April 2017.

It’s looking like one of the most thrilling finishes in Ligue 1 for many years with just four points separating the top four clubs at the time of writing. Monaco currently occupy third place and Niko Kovac’s side have only been beaten once since the turn of the year. A league double over Paris Saint-Germain has yielded most of their profit with the victory on home soil back in November being offered at 5/1. In the reverse fixture in the French capital in February, Monaco went off 9/2 to win the game which also shows the progress they have made this campaign.

With just seven games to go in the French top flight, Lille are in pole position with a three point lead over PSG. It would be their first title since 2011 should they manage to lift the trophy at the end of the season, and so far no team has won more times on the road than Christophe Galtier’s team. Their win over PSG at the weekend, priced at 4/1, is the biggest of their campaign and has come at just the right time as the title goes down to the wire.

Runners up in Ligue 2 last season, it’s been a stellar season for the side from North-East France exceeding expectations and currently occupying the final Europa League qualification spot in 5th. A 1-0 win over PSG in their third game of the season (16/5) very much set the tone. Away wins at Saint-Etienne, Marseille and Monaco (9/2) have all played their part in making them the third most profitable time in the French top flight.

The Premier League, the most unpredictable in Europe?

So having concluded the top ten most profitable sides in Europe’s top five league’s, we can see that five of them originate from the Premier League. We’ve often heard taglines such as; ‘the most exciting and unpredictable league in the world’ but is this still the case? The nature of this season and slip ups from top sides such as Liverpool has allowed others such as Aston Villa and Burnley to slide into the ‘most profitable’ category.

Opposing the so called ‘big-boys’ in the Premier League can often pay dividends and Leicester’s win at Manchester City at the start of the campaign is very much the cause of them ranking so highly.

On the flip side, no team from Germany featured in the top ten with results here possibly being a little more predictable than those back home. Augsburg are currently the most profitable in the Bundesliga with a profit of £63.80 to a £10 win stake each game.

The least profitable in Europe

Look away now Blades backers, Sheffield United are the least profitable team in the Premier League and if you had staked £10 on them to win each game this term you would be down to the tune of £117.80.

However, the South Yorkshire side are far from the least profitable team from Europe’s top five league’s. It’s French outfit Dijon who sit at the foot of the table after having only won two of their 31 games in 20-21. If you’d backed them every match you’d be looking at a loss of £240.70!

Teams to look out for

You may have also noticed that there are a few common themes with this list of the top ten most profitable sides this term. As we have already mentioned, five come from the Premier League. It’s also interesting that three of the ten were newly promoted to their domestic top flight last season. Lens, Benevento and Cadiz all fall into that category and there may be an element of these sides being overlooked a little in the markets. Momentum from a promotion winning season combined the bookmakers underestimating the smaller sides a little can provide profitable betting opportunities.