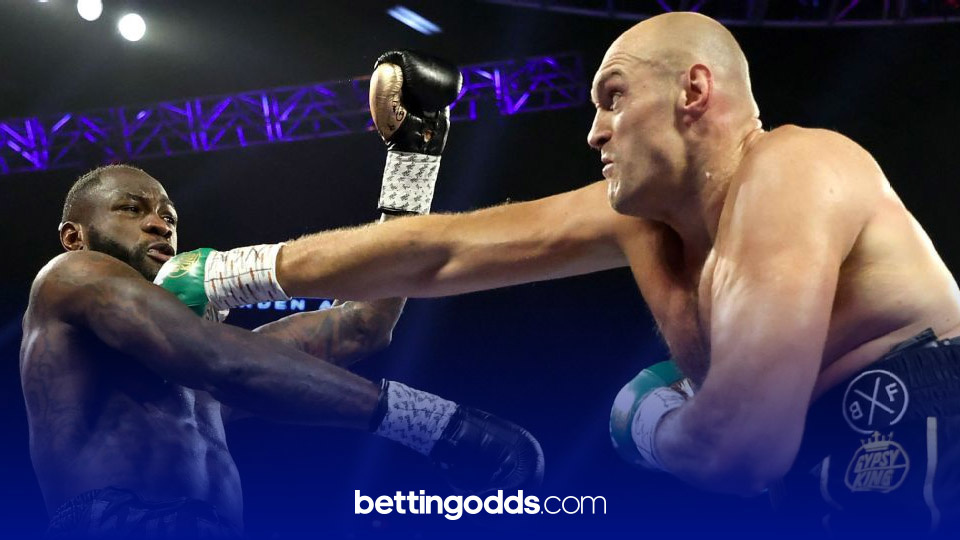 It may not be the all British blockbuster event between Joshua and Fury we were hoping for but we still get to see the Champ in action. Tyson Fury takes on Deontay Wilder for the third time next weekend and we’re going to take a look at what the bookies have to say about the heavyweight bout.

It should come as no surprise to see The Gypsy King come in as the massive favourite and Wilder a big underdog. It’s fair to say the majority of people had Tyson winning the first fight despite the late knockdown from The Bronze Bomber, Fury would eventually silence all the doubters in their second fight where he absolutely dismantled the American. The Brit comes in as a 2/7 favourite with the American being priced at around 5/2. With all that said, let's take a look at the other markets to see what value we can find.

Deontay Wilder was straight-up embarrassed last time he fought Tyson Fury and I think it’s going to happen again this time. In their first bout Fury never really looked to get Wilder out of there and always planned on going the distance but in their second fight, the Champ realised how much of a better boxer he was and knew he could stop him when he wanted. It was clear the change in style the Gypsy King took in the rematch and he’ll be confident in getting a stoppage again this time out.

Fury floored Wilder with a right hand in the third round in the last fight and then knocked him down again in the 5th before the towel had to come in for the American in the 7th. Tyson is convinced that this fight will be no different and that’s why I think 13/10 for Wilder to be knocked down in Rounds 1-6 is excellent value. Wilder has shown that he can take the punches as he ‘recovered’ from two knockdowns but the volume punching from Fury is ultimately what lead to him ending up on the canvas. Considering there were two knockdowns in this timeframe last fight I’m a bit surprised to see it priced at above even money, it also makes it even more remarkable when Fury is odds on to win via stoppage!

With Tyson being such a big favourite at 2/7, I think to get some value out of the fight, you’ve got to predict how it’s going to finish. The Brit is currently priced at 5/6 for a win via stoppage or 13/5 for a points/decision victory. I’d definitely be siding with the stoppage route from what we’ve seen last time and I actually think 5/6 isn’t the worst value, yes it may be odds on but it’s a pick I’d feel very confident in. Not many want to see this fight happen because everyone is so confident in another victory for Fury and I can only see him stopping Wilder again. I personally see this fight as a pure mismatch.

Fury is the perfect matchup against a fighter like Wilder who has less boxing ability and relies more on his power punches. Although he does have a 70% KO ratio the Brit is not exactly known for his one-punch power. Instead, we will see something similar to what we did in the last fight where Tyson just lands punch after punch, eventually resulting in a stoppage from the ref or his own corner which we saw in the last fight. I can’t see Fury wanting to go 12 rounds and ultimately I feel whatever Fury wants to happen in this fight happens, and he said he wants a stoppage again.

Now I don’t think many people expect Wilder to win this fight, but if they do, there’s only one way he wins and that’s by knockout. He’s not going to outbox Fury, and we saw even in the first fight where he scored two knockdowns he was lucky to get away with a draw. If Wilder wants to win this one he’s got to get Fury out of there. The Bronze Bomber is priced at around 5/2 for a win against Tyson but 10/3 via knockout. To me, that’s an absolute no-brainer if you’re backing the challenger.

The American boasts an absurd 93% knockout ratio in his boxing career and it was 100% up until he met Tyson Fury. Again I don’t think he personally will win but in terms of getting value out of your picks, this is how you’re going to maximise your returns on a bet on Deontay Wilder. We’ve seen him basically knock Fury out in the first fight and although it would shock the world if he did something similar, you’ve always got to expect that when you’re fighting one of the hardest hitters the sport of boxing has ever seen.

That pretty much wraps up everything for this fight, I don’t see it going the distance whatsoever and I do think Tyson will win, but who knows, Deontay might surprise the world with his infamous power...