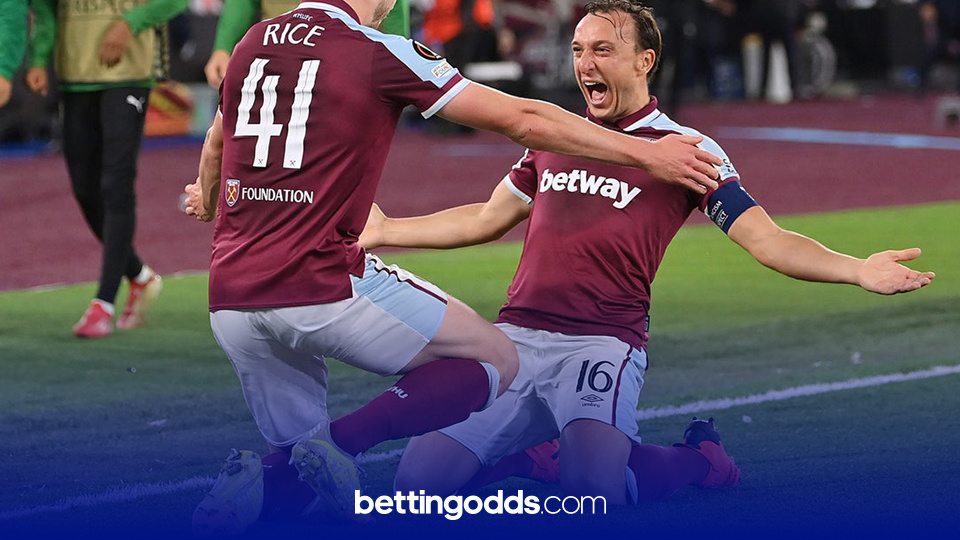 Europa League Odds: The Hammers have been clipped into favourites by the bookies.
By Callum Pragnell
16:32 Friday 1st October 2021 - 3 minute read

West Ham have been cut into the 12/1 bookmaker favourites to win this season’s Europa League, following their second consecutive win in the competition on Thursday night.

David Moyes’ side beat Austrian outfit Rapid Wien 2-0 at the London Stadium, as Declan Rice and Said Benrahma found the net to retain their position at the top of Group H. The Hammers have now taken six points from six in their opening two Europa League group stage encounters, after beating Dinamo Zagreb by the same scoreline a fortnight ago.

Having not participated in European competition since the 2016-17 campaign, the east London side are now in pole position to qualify for the the last-16 in March. Before a ball was kicked, West Ham were 25/1 to win the Europa League but after a positive start they have seen their price more than halved, making them the current favourites to go the distance at the time of writing, just a shade ahead of Bayer Leverkusen (14/1).

That is a brilliant team goal from West Ham! 🙌

Declan Rice scores again in the Europa League, but it's all about the control and pass from Michail Antonio... 🤤

The market is set to change drastically in the new year, however, as teams from the Champions League fall into the competition. In a shake up to the tournament’s format this season, only the winners of each group will be guaranteed a spot in the knockout stages, with each second-placed team going into a play-off against the eight third-placed teams who fall out of the UCL. The eight winners of those matches will then join the eight group winners who have already secured qualification into the last-16.

Expect some big-hitters to enter the competition at this point, with the likes of AC Milan, Porto, Inter Milan, Barcelona, Man Utd and Lille all potential inclusions after poor starts to their respective campaigns in the Champions League. Should West Ham continue their fine form and secure top-spot in Group H, thus qualifying for the last-16, though, it would be foolish to rule out of their chances of going deep into the competition and even reaching the final, given the quality of their squad and how much momentum they would have obtained during the qualification process.

Who else is near the top of the betting?

Leicester and Napoli began the season as favourites to win the Europa League at 12/1, but after a draw (against each other) and respective defeats against Legia Warsaw and Spartak Moscow in Gameweek 2, both have now drifted out to 20/1 in the betting. Lyon have started well in Group A with two wins and two clean sheets from their opening games; the Frenchmen are now third-favourites to win the competition at a best-price 18/1 (Betfred) and look well on their way to making the last-16 following their assertive performances so far.

Serie A outfit Lazio can also be backed at 20/1. The Italians have recorded a defeat and a win from their first two UEL games and sit second in Group E behind Galatasaray (66/1), but certainly have the quality to overtake the early table-toppers in the remaining group stage ties against the Turkish giants (h), Marseille and Lokomotiv Moscow (a).

Away from the head of the betting and PSV are a big price to go the distance at 40/1. The Dutch side have started brightly and currently reside at the top of Group B - ahead of Monaco, Real Sociedad and Sturm Graz - following a win and a draw in their Europa League openers. While there is still a long way to go, at such a big price and with each-way available from most firms (1st and 2nd (½ odds)), the Eredivisie titans could be a worthwhile outside play at this stage.