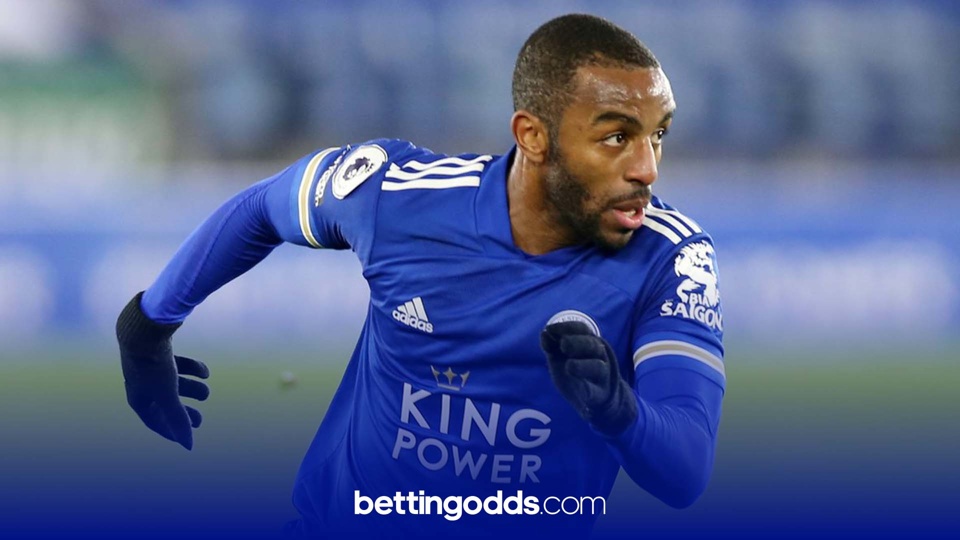 Ricardo Pereira registered two shots on target in his last away league games and features in our football tips on Thursday
By Anthony Eadson
16:12 Tuesday 2nd March 2021 - 5 minute read

There’s three Premier League games on Wednesday evening with Leicester travelling to Burnley to take on Sean Dyche’s side at Turf Moor. The Foxes are unbeaten in their last eight outings on the road and have the chance to temporarily go ahead of Manchester United before Ole Gunnar Solskjaer’s side take on Crystal Palace in the late kick off. @AnthonyEadson has three football tips for the game including an 18/1 shout from the Man of the Match market.

The visitors are priced at 21/20 with most bookmakers for the win but will be without numerous players in, James Justin, James Maddison, Harvey Barnes, Ayoze Perez and Dennis Praet. Jamie Vardy should be fine to start the game with Cengiz Under also in line for only his second start in the league this term.

Sean Dyche will be without Ashley Barnes and Johann Gundmondsson who are both sidelined, with Erik Peters and Robbie Brady both a doubt. After coming off the bench against Spurs at the weekend, Chris Wood should be fit enough to start. Burnley can be backed at 3/1 for the victory on Wednesday with the draw that has landed in their last three at Turf Moor priced at 23/10.

The first selection I’m touting at Turf Moor is Chris Wood to have a headed shot on target should he start for the Clarets. The New Zealand International and former Leicester City striker has registered nine shots on target for Burnley in the league this term via his head, with one of those resulting in a goal.

Wood came off the bench in the 4-0 defeat against Spurs at the weekend and when Sean Dyche was asked if the striker would start against Leicester he replied, “We hope so, there is no reaction, I don’t think. But we will get another couple of days training under his belt and hopefully he will be injury free and certainly available for selection”

This selection has landed in nine of Chris Wood’s 20 starts this term (45%), but interestingly none of those headed shots on target have come against ‘big-six’ sides. When we take those teams out of the picture, Wood has actually had a headed shot on target against nine of the 13 starts against non ‘big-six’ teams this season (69%).

The price of 12/5 offered on Wood to have a headed shot on target by Betfair, implies a 29% chance of landing, and considering his record this season against teams outside the ‘big-six’ this looks a good proposition with Leicester looking far from their best in their last two games.

I’ll be paying close attention to the team news an hour before kick-off in this game and one player I’ll have my eye on in particular is Ricardo Pereira of Leicester City. The 27-year-old can play a range of positions and in his last two starts has found himself as a right midfielder and a right winger.

Leicester struggled against Arsenal on Sunday and Periera did not manage any shots in the full 90, however in his previous away game against Aston Villa, the former Porto man registered two shots on target. In the absence of James Maddison I can see Pereira slotting in higher up the pitch as part of an attacking three in behind Jamie Vardy. There’s a full range of prices from different firms on this selection with Sky Bet going just 9/2 for the Portuguese player to have two shots on target. Betfair are currently 11/1, although it may be worth shopping around as Coral were 25/1 on this market when it opened.

Both Betfair and Paddy Power offer a market on who will be awarded the WhoScored Man of The Match, which you can read more about here if you are unfamiliar with that. Of all the players in the Burnley squad to have played three or more games this season, Ben Mee has the highest average rating on WhoScored.com.

I’m having a small play on the central defender to pick up the award on Wednesday at the rather generous looking price of 18/1. With Leicester’s injuries in mind I think Burnley can take something from this match and they have only lost two of their last ten on home soil, which came against Manchester United and Manchester City.

Ben Mee’s WhoScored rating of 7.01 this season puts him ahead of James Tarkowski and Nick Pope in second and third place this season in terms of average. Both of those players are shorter in the betting than Bee Mee who has won the award twice this season. At 18/1 he does look slightly overpriced in my opinion.

That’s 12/5, 11/1 and 18/1 selections in total. The game can be seen live on Sky Sports main event at 6pm, please always gamble responsibly.