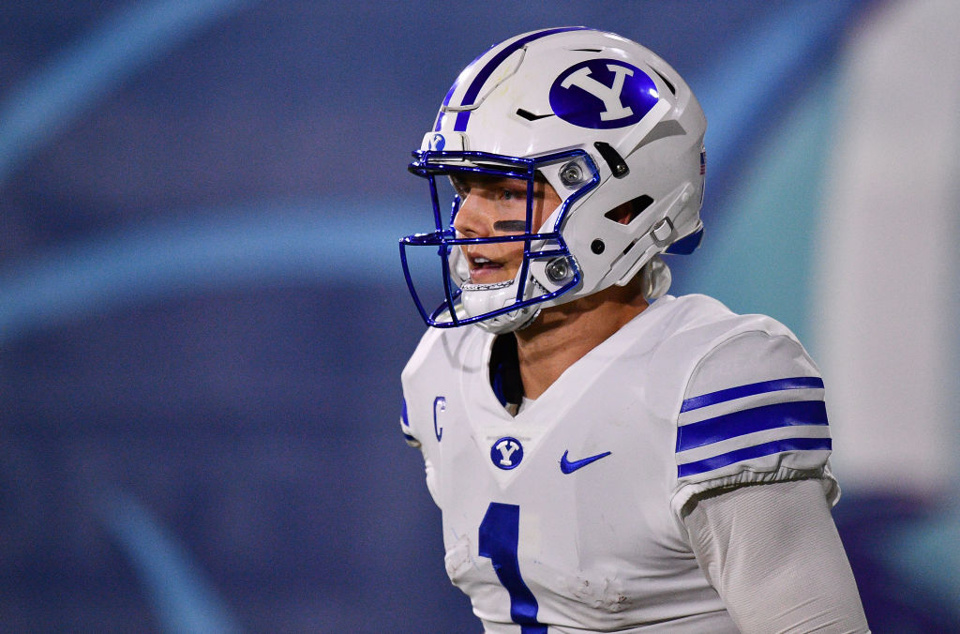 Zach Wilson had a great junior season at BYU but does than translate into a good rookie year with the Jets?
By Neil Monnery
12:05 Friday 6th August 2021 - 3 minute read

He may be the #2 overall pick but can Zach Wilson really really throw for north of 3850.5 yards in his rookie season for the Jets? Neil Monnery isn't so sure...

Trevor Lawrence was long seen as the number one overall pick. He was the best player coming out of high school according to the 247Sports composite and his collegiate career went pretty much exactly as expected. The player who was taken next in the NFL Draft earlier this year though wasn’t so much of a slam dunk.

Zach Wilson was the 958th best player according to the same website and was the 38th best Pro style QB. He committed to BYU and slowly saw his stock rise - topping out with a superb junior season where he threw for 3.692 yards with 33 tosses going for Touchdowns and giving up only three picks. That is the type of record that gets you talked about. When you beat Steve Young’s school record for completion percentage in a season, scouts and GM’s are going to take notice.

It was however at his Pro Day where he wowed scouts and pretty much made every throw in the book. Throwing it deep on a dime and vaulting himself into the conversation for being that second player taken behind Trevor Lawrence. The Jets had that pick and zeroed in on the then 21 year-old and in doing so - moved on from the Sam Darnold era in one foul swoop.

What surprises me however is that the Sportsbooks are so high on him racking up the yards this season. His college numbers in 2020 were gaudy but the NFL takes time to adjust to and doing so for the New York Jets is tougher than at most places. They have a roster that isn’t exactly teeming with skill position stars.

Michael Carter looks like the favorite to win the starting job in the backfield and this fourth-round pick out of North Carolina. He is very much an under the radar pick and whilst his 1,245 rushing yards in a single season is good for eighth on the all-time list for the Tar Heels - is he going to be good enough to get defenses to respect the running game? I’m skeptical.

On the outside, Corey Davis has come in and he’ll lead the receiving corps but has yet to put up a 1,000 yard season. That is troubling when you consider Jamison Crowder and Keelan Cole are tabbed as WR2 and R3 respectively. If Wilson is going to put up big numbers then he needs some real talent to throw the ball to and I just don’t think the Jets have it.

I am fine with the Zach Wilson pick as long-term he has the skills to be a very good QB in the NFL but 3850.5 yards in his rookie season playing on a very poor team? Seems like a stretch to me.