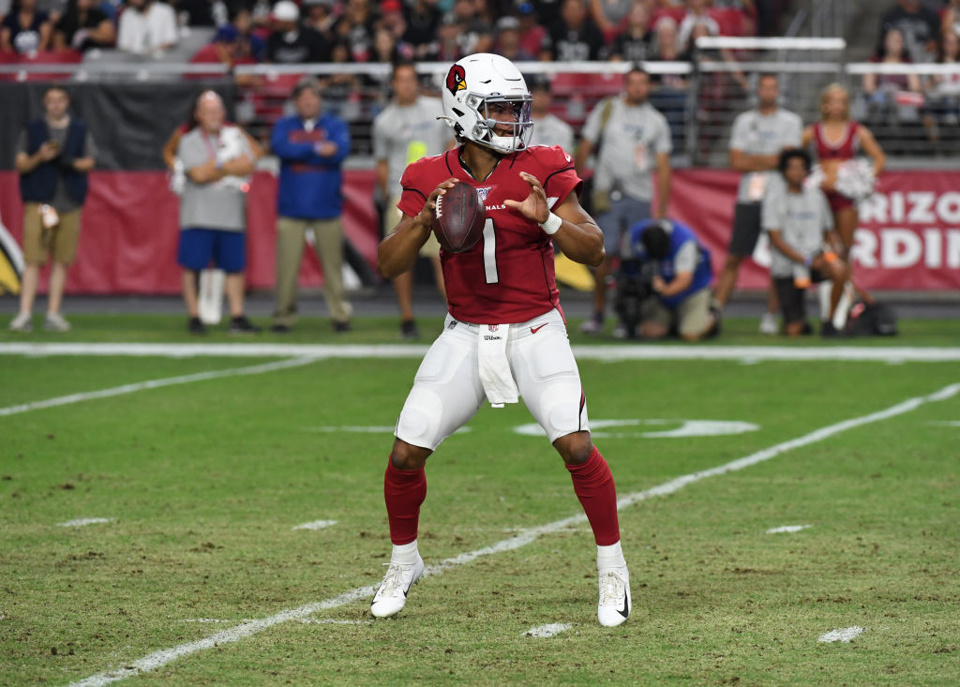 Kyler Murray is too short of a price for me in the NFL MVP Betting Markets
By Neil Monnery
09:26 Monday 19th April 2021 - 3 minute read

There are four players who currently have odds shorter than +1500 to win the 2021 NFL MVP Trophy. We at BettingOdds.com have a look at their chances.

Patrick Mahomes (+500) - The unsurprising favorite is the Kansas City Chiefs QB who has taken our collective breath away over the course of the past two NFL campaigns. His talent is unquestioned and with the likes of Tyreek Hill and Mecole Hardman to stretch the field - he is always ready to hit the big one.

His 108.2 QBR last season came with 38 TDs and 6 INTs for 4,740 yards. Question marks around his O-Line will have arisen from the Super Bowl and the departure of Eric Fisher but the addition of Joe Thuney should help. No surprise he’s the shortest price but he’s not tremendous value.

Aaron Rodgers (+800) - The defending and reigning NFL MVP will not be usurped by Jordan Love just yet. Like previous superstar veteran QBs - Rodgers now possesses the full keys to the offense. The return of Aaron Jones means that opposing teams will have to factor in the running game.

Devante Adams is a wonderful talent with outstanding hands who gives the 37 year-old a true WR1. Rodgers’ 70.7% completion percentage in 2020 was the highest of his career as a full-time starter and was a bounceback from three good but not great seasons. 48 TDs with 5 INTs is going to get it done. Still too short of a price for me.

Josh Allen (+1300) - If you’d said a year ago that Josh Allen would (rightly) be in the upper echelons of potential NFL MVP betting then you would’ve been laughed at. I remember during fantasy drafts last fall, he was a popular name to disappoint. I know I went into my draft with him on the ‘Do not draft’ list.

I did not win my fantasy league. I missed the playoffs and the person who drafted Josh Allen made the final. That says a lot as his talent blossomed in 2020. The addition of a true WR1 in Stefon Diggs did a lot more for his stats than expected but his 4.544 passing yards coupled with 631 on the ground meant he cleared 5,000 in all-purpose yards. The Bills’ have not seen many skill players depart in Free Agency (John Brown has been replaced by Emmanuel Sanders as the WR2/3) so I don’t see any reason he won’t be challenging for MVP once more.

Kyler Murray (+1400) Speaking of my fantasy team - here is my 2020 fantasy QB who was stellar - until he wasn’t. The fact he’s the fourth choice in the current NFL MVP markets to be frank - blows my mind.

There is little doubt that he is my favorite player to watch. Give me a bit of the Cardinals on Red Zone and I’m all in. His running ability as a QB is stupendous and that low center of gravity allows him to scamper through holes. He is still a project passing wise however even with arguably the best WR in the game DeAndre Hopkins. He only had one game with more than 400 yards passing with only two more over the 350 yard plateau in 2020. Very good yes but the fourth favorite for the MVP? I just don’t see it. I hope I’m wrong as seeing Kyler Murray become the player he could be would be magnificent to watch.

So all-in-all I'm not in love with any of the favorites - certainly not at the price they are currently being offered at. Plenty of value deeper down though and I'll be looking into that later today...