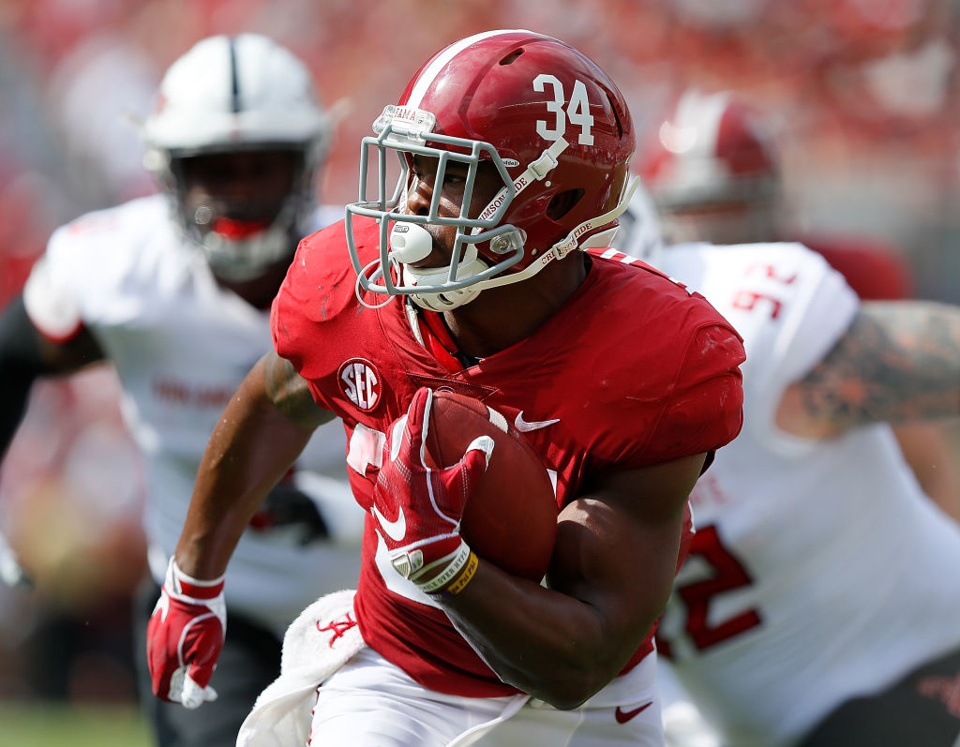 Is Damien Harris set to be the first Running Back taken in the draft?
By Zachary Rainey
13:41 Thursday 15th April 2021 - 3 minute read

Last year’s Alabama Crimson Tide team was like something we had never seen before.

Usually, a statement like that would be followed with talk about how legendary head coach Nick Saban’s defense was that season and where it would rank among his defenses all-time.

But with his most recent title team, it was his offense that stole the show and made headlines. You could’ve made a legitimate case for any of the offensive starters for the Heisman. Mac Jones had a season that was similar to Joe Burrow’s LSU season just a year prior, while DeVonta Smith became the first wide receiver since Desmond Howard to take home the hardware.

Because of the hype on the outside, Najee Harris sort of flew under the radar. However, his stats rival some past Crimson Tide running backs that did win the Heisman.

As soon as the season ended, Clemson’s Travis Etienne was the favorite to be the first running back drafted, but odds soon shifted back to Harris and currently sits at -110.

Etienne had exceptional sophomore and junior seasons, rushing for over 1,600 yards in both seasons and rushed for 24 touchdowns in his sophomore campaign in Clemson’s title year and 19 the following year.

Etienne dealt with injuries after opting to return for his senior season and saw his yards per carry go from 7.8 as a junior to 5.4 as a senior.

In that time, America fell in love with Harris at Alabama. Also a senior, Harris was coming off of a 1,224 yard and 13 touchdowns in his junior season and doubled his touchdown output as a senior.

Both guys have proven they can be a factor in the passing game as well as between the tackles, so you’re getting an all-around guy. For now, the question remains as to when the first running back will come off the board.

NFL.com’s Lance Zierlein came out with his most recent mock draft and had being selected before Harris. Ryan Wilson at CBS Sports agreed in his mock draft for CBS Sports.

Now, those guys are truly plugged in. They have sources upon sources, and as I mentioned in a previous article, it’s smokescreen season. Teams could be telling writers like Wilson and Zierlein that they like one over the other, but it could be all a ruse. But with enough mock drafts showing Etienne being selected over Harris, the price of +140 could be a bargain before it moves as we get closer to draft day.

North Carolina’s Javonte Williams is currently listed at +400 to be the first running back selected, but I have yet to see a mock draft that has Williams being selected prior to Harris or Etienne. After that it’s Michael Carter at +3300, Kenneth Gainwell +4000, along with Trey Sermon, Chubba Hubbard +5000 and Jaret Patterson +6000 according to DraftKings.