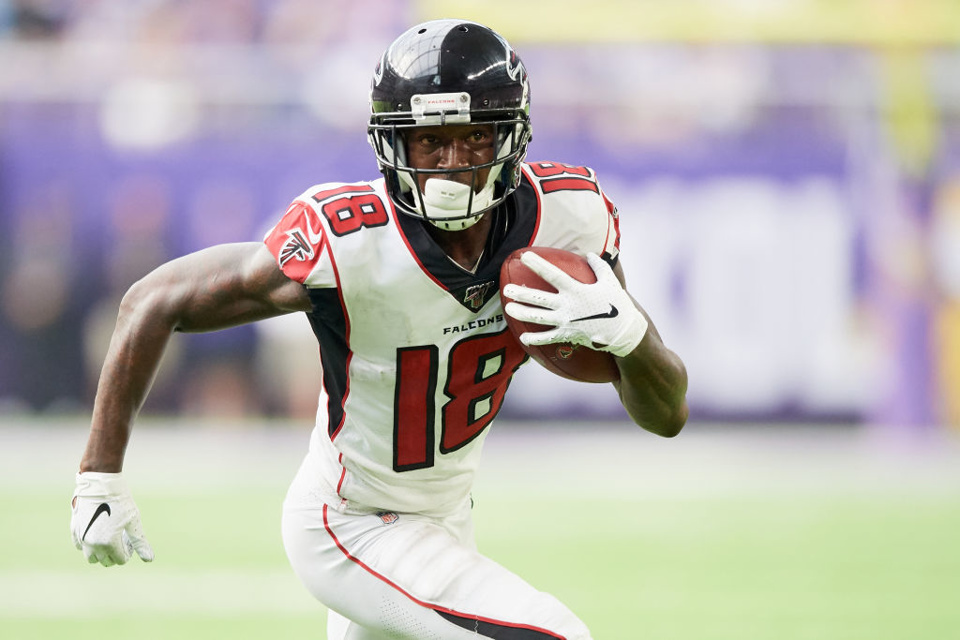 Calvin Ridley steps up to be WR1 in Atlanta this season
By Neil Monnery
13:12 Wednesday 4th August 2021 - 3 minute read

The Sportsbooks have set Calvin Ridley's over/under number at 1400.5 yards and Neil Monnery took his time before deciding which way to lean...

With Matt Ryan known as a Quarterback who likes to sling it around, coupled with the departure of Julio Jones in the off season, you’d be forgiven for expecting this to be a slam dunk over pick but as Lee Corso would say, ‘not so fast…’

Calvin Ridley’s over/under number has been set at 1400.5 yards, which is slightly higher than the 1,374 he put up last season. It must be said that he did that in 15 games rather than the 17 on the slate for the 2021 season. So if he continued his yards/game average of last season, he would cruise to the over.

With Julio Jones set to play for Tennessee, it should mean a step up in targets for Ridley. He’s gone from 92 to 93 to 143 in his three seasons, so it is pretty apparent that he’s become a huge part of the Falcons aerial attack. With Jones gone however it does mean that Ridley is likely to get the toughest cornerback on him at most times. I certainly think he can deal with that but I see a pretty big wildcard out there that could change everything.

When Atlanta took the former Florida Gator with their first pick in the 2021 NFL Draft, they got the most dynamic offensive player on the board. Trevor Lawrence was the best player in the draft but Pitts was in my opinion the second best. He is a nightmare match-up for defensive coordinators and he can line-up virtually anywhere on the field of play. I think even as a rookie he’ll be a huge weapon for their offense and could take a lot of targets away from their receiving options.

My opinion on Pitts is sky-high, going into my fantasy NFL draft later in the month he’ll be higher on my boards than I suspect many expect. What makes up my mind in this prop betting market however is who the Falcons have lined up as WR2 and WR3.

Do Russell Gage or Olamide Zaccheaus scare anyone? Not really. They’ll pick up plenty of targets but with Atlanta likely to be playing from behind a fair amount this season, I see Matty Ice looking deep for his top deep threat.

Give me the over.