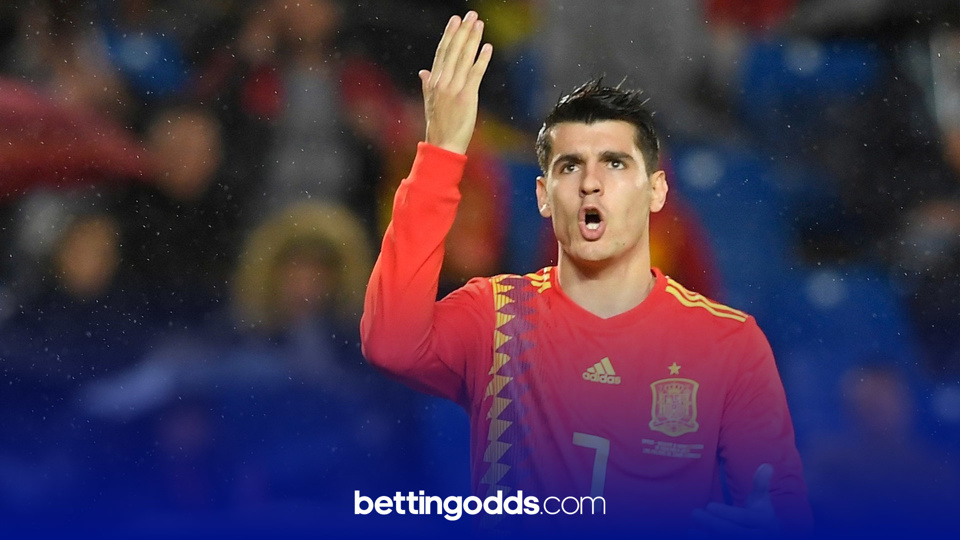 Alvaro Morata is set to lead the Spanish line against the Swiss on Friday
By Neil Monnery
17:00 Thursday 1st July 2021 - 3 minute read

Spain and Switzerland open up the Quarter-Finals at Euro 2020 and both are coming off tremendous games in the Round of 16. Neil Monnery has four picks ahead of this one...

The first Round of 16 game takes place in Russia and could easily have seen any of four teams making their way here. Spain beat Croatia in Extra Time after a quite thrilling 3-3 draw through 90 minutes whilst Switzerland downed France after a similar 3-3 draw but they managed to hold on for penalties. Monday was quite clearly one of the best days of knockout football that major tournament football has ever seen.

I’ve been downbeat on Spain’s attacking prowess throughout my previews but I suppose ten goals in two games isn’t too bad when you think about it. That 5-0 win over Slovakia was heavily influenced by a shocking own goal that crushed their opponents hopes.

That Croatia game though was a more legitimate performance in my eyes and for all the negative column inches Alvaro Morata gets - the way he took his goal in Extra Time was quite simply outstanding. Big props to him for that and even though his finishing abilities are often questioned - you can’t take it away from him that he continues to get into the right positions.

Manchester City’s Ferran Torres seems to have established himself as part of that front three. He scored in both the Croatia and Slovakia games and is a +240 shot to score at anytime with Unibet and SugarHouse. That is a fair price.

The big question mark is how Spain look at the back. When Pau Torres replaced Eric Garcia in the final 20 minutes against Croatia everything went to pot. It looks likely Garcia will start again but if he doesn’t - that might adjust my thinking.

As for the Swiss, they will be full of confidence following the way they beat the tournament favorites France on Monday afternoon. It wasn’t a smash and grab type of game. They deserved to win. France played well for 10-15 minutes and scored three times due in large part to individual brilliance. Switzerland though were the better side for the vast majority of the game.

Haris Seferovic scored twice with two very different headers. His first was pure strength out-muscling his defender with the second a very nice bit of movement from a wonderful early cross. Any defender would struggle to cope with that type of strength and movement so if he plays like that again on Friday then they will be well in it.

I’ve been a huge fan of Breel Embolo throughout this tournament. The young frontman has the type of pace and power that gives defenders nightmares. If he shows up then I fully expect an open game with plenty of goalmouth action at both ends.

Picks: Both Teams to Score is -110 BetMGM, Borgata and William Hill and even though you aren’t getting at least Even money odds - I think you are still getting a good price.

Fernan Torres to score anytime at +240 is worth a roll of the dice.

Granit Xhaka is +137 to be shown a card with bet365 and he’s always a decent shout to see a flash of yellow.

Lastly the big one - the Moneyline - both teams went to Extra Time on Monday and at +280 for the tie - I’ll take it. This has been a tournament full of upsets and close games and this game can continue along that line.

Croatia vs. Spain Predictions: Modric to score and Morata to see yellow

Croatia vs. Spain Moneyline Odds, Predictions & Betting Picks for their Euro 2020 Round of 16 match on June 28,…