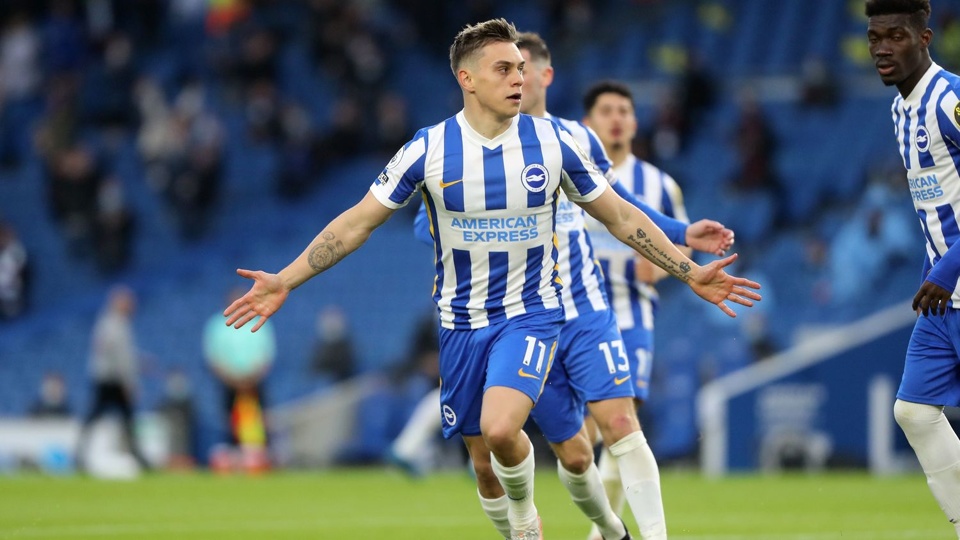 Trossard has had somewhat of a new lease of life in a new position this season
By Luke Hamilton
16:17 Saturday 1st January 2022 - 4 minute read

Saturday's Premier League fixture list left a lot to be desired with only three games being played. Sunday, however, is a far tastier prospect, with four matches on at the time of writing.

Brentford vs Aston Villa and Chelsea vs Liverpool are the two televised clashes being offered, with the latter by far the most tantalising match across this entire weekend.

But we'll actually be looking elsewhere to the other one of the other 2pm kick offs in the top flight on Sunday to form our Bet Builder. This will be in the form of Brighton's trip to Goodison Park to face Everton.

The first part of our Bet Builder is for Mason Holgate to be booked. It's expected that he and Michael Keane will start in the heart of the Toffees' defence due to Yerry Mina's continued absence tomorrow in a game which will be their first since facing Chelsea on the 16th December due to Covid-related cancellations.

Despite such a prolonged break, things were ropey in this defence anyway. Everton are a side in quite the rut and while things maybe aren't quite as grim as some make out, I do expect things to get worse for them before they get better.

The numbers also happen to heavily support their defensive frailties, with no clean sheet in the last six matches, during which they've conceded 13 times including four against Liverpool, three vs Man City and three to Crystal Palace.

Holgate is a rash individual and is someone who has been used to plug gaps across the back four rather than owning any spot of his own. Despite only starting five times in the PL this season, Holgate has committed the eighth-highest number of fouls of any Everton player, picking up a caution in his and Everton's last outing at Stamford Bridge.

Brighton are always a threat in the opposition's half regardless of the game's eventual outcome, but four points from their last two matches including a surprise point against Chelsea suggests things will continue to pick up for them in 2022.

As for the second half of this Sunday Bet Builder, I'm dipping into the shots on target market. Leandro Trossard is the man I fancy in this department and here's why. He leads the way in both shots and SOT for Brighton this season, which is no surprise given his threat in front of goal, coupled with the fact that he is one of only two men to feature in all of the Seagulls' league matches in the 2021/22 campaign so far.

Trossard has hit the line of 2+ shots on target on four different occasions in the Premier League this season, with one of those coming during Everton's visit to the Amex back in August. The Belgian had a whopping five shots that day and finds himself in a lot more capable goalscoring positions since being deployed as a false nine rather than placed out wide.

During BHA's win over Brentford, the 27-year-old was pivotal to everything good that day and showed his instincts with a wonderfully taken goal. It's also worth mentioning that despite only featuring for 45 minutes in this match, he managed two shots on target.

For him to do the same vs Everton is available at 13/5 with Paddy Power. This and a Holgate booking then double up for a 14/1 Bet Builder with the same bookmaker.