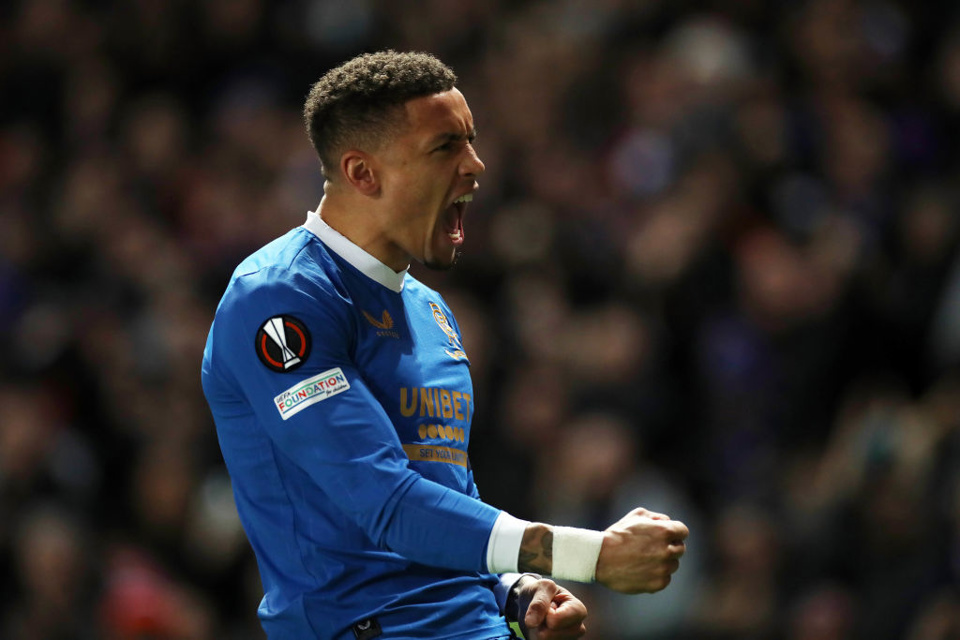 James Tavernier has more yellow cards than any other Rangers player this season
By Ian Ford
16:58 Tuesday 17th May 2022 - 4 minute read

Rangers fans have travelled in their masses to Seville for Thursday evening’s Europa League final against Eintracht Frankfurt, with Giovanni van Bronckhorst’s side priced at 6/5 to lift the trophy.

As well as having a full preview for the game from one of our best betting minds @JimmyThePunt, we’ve also taken an indepth look at some player stats and have put together a Bet Builder we like the look of. At the time of writing this can be backed at 90/1 with bet365. 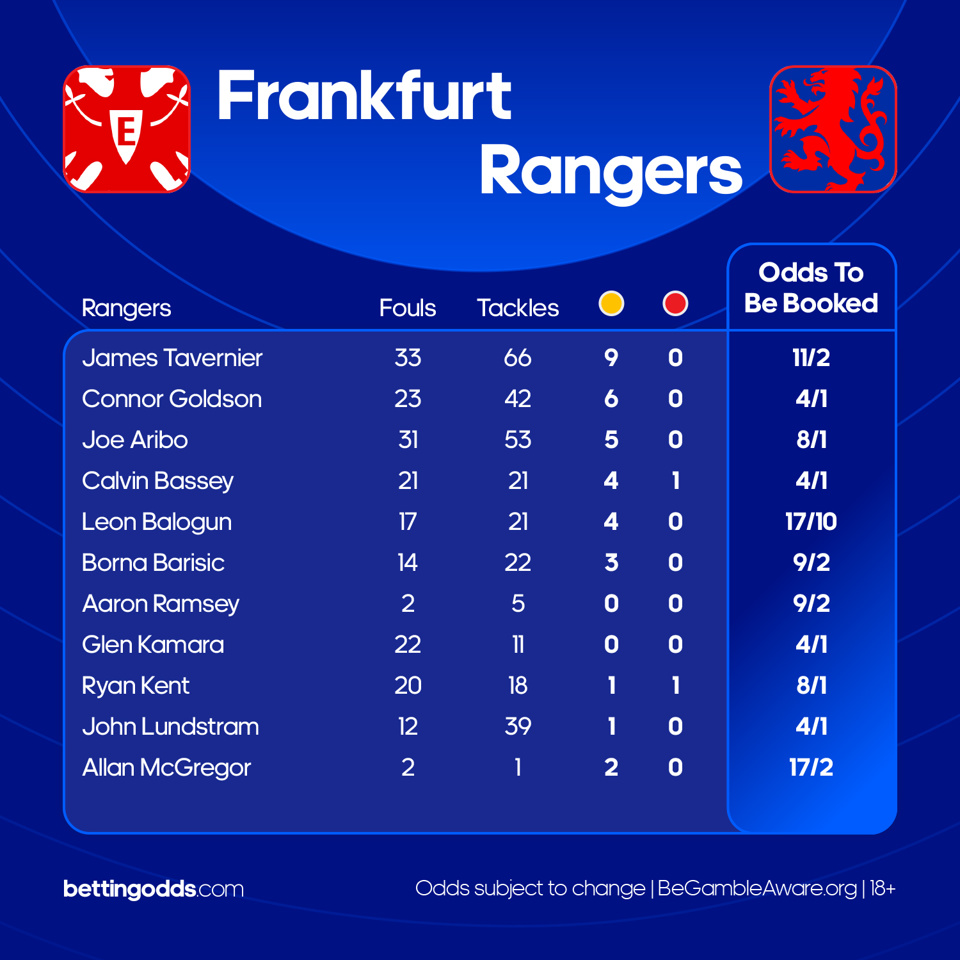 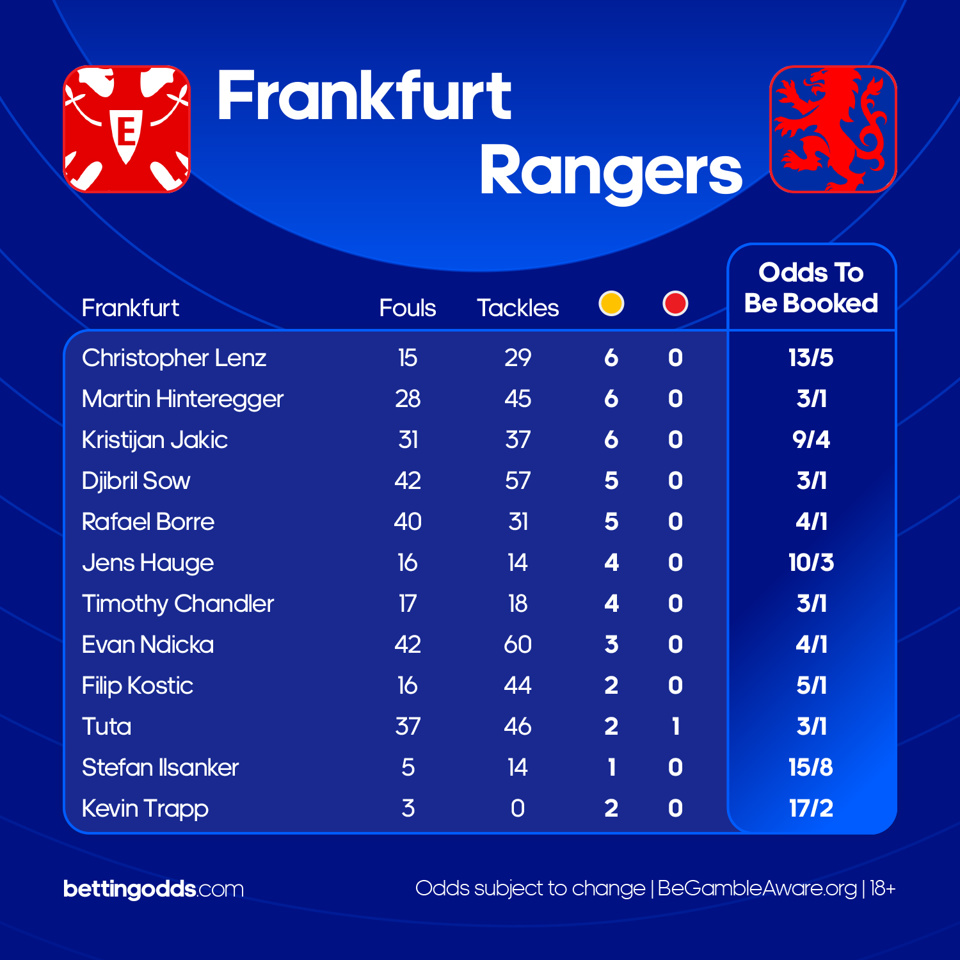 We’ll start with players being carded and their prices for Wednesday. Slovenian Slavko Vincic will be the referee for the Europa League final. This season he’s taken control of eight Champions League matches where he has averaged 3.88 yellows per game. In his career Vincic has dished out 78 yellows (4.11pg) and 3 red (0.16pg) across the 19 Europa League matches he’s been on duty for.

On first glance there are some pretty generous prices available from certain bookmakers on Rangers players picking up a card. One that makes the most appeal in our opinion is James Tavernier. No player has picked up more cautions for the Gers in the league this season than the right-back with nine in 31 appearances. He was also booked in the Semi-final first leg against RB Leipzig and we are surprised to see 11/2 on offer with Unibet here considering his disciplinary record this campaign.

Joe Aribo also is worth a second look at 8/1 for a card with Unibet. Aribo has five yellow cards to his name in the league, as well as two in the Europa League and one in the Scottish Cup. Should he start the match, 8/1 looks generous.

Martin Hinteregger will miss the final through injury and he is one of three players, along with Christopher Lenz and Kristijan Jakic who are tied for the most yellows for Frankfurt in the league this season, with six to their name. There’s some fairly short prices on show for Frankfurt’s prime suspects to be carded here, so one alternative selection at more backable odds could be forward Rafael Borre. The Colombian has been shown five yellows in the Bundesliga in 2021/2022 and averages 1.3 fouls per game. Betfair and Paddy Power go 15/8 on him picking up a card against Rangers with bet365 much better priced at 4/1. 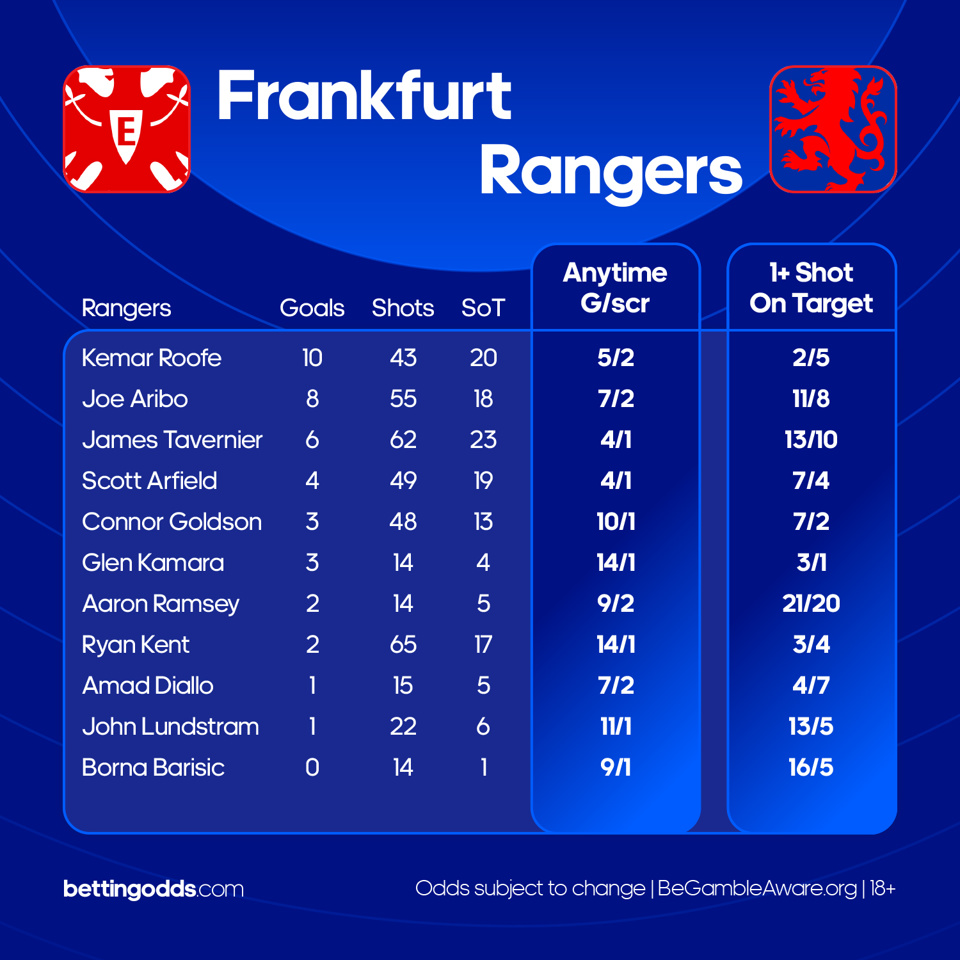 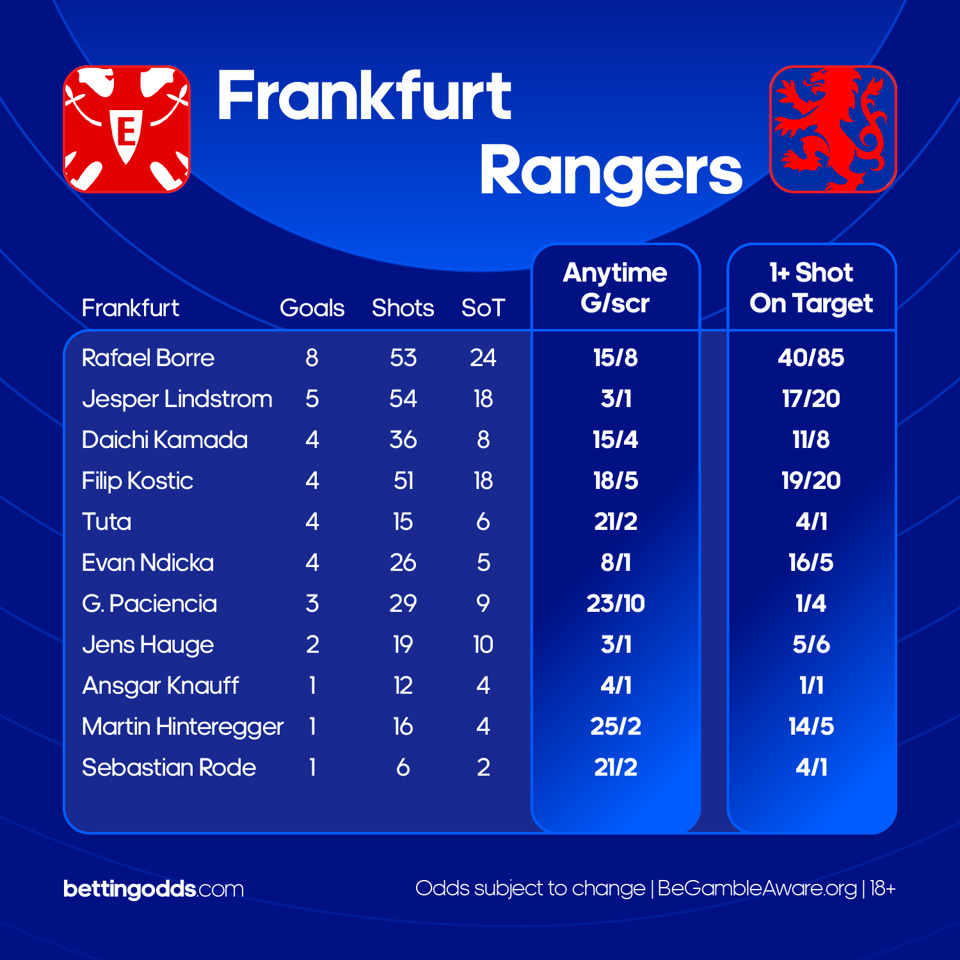 Moving on to shots on target and goal scorers and one player who we’ve decided to get behind in the shots on target market for Rangers is Aaron Ramsey. The Welshman has struggled for fitness since arriving in Scotland but has started two of the last three matches. His experience could well prove vital to in a game of this magnitude and we can see him featuring from the off here.  Ramsey has registered six shots on target in his last six starts for Rangers and we wouldn’t put anyone off backing him to do so again in Spain, with Over 0.5 priced around even money.

Rounding off our 90/1 Bet Builder is Ansgar Knaufff to have Over 0.5 shots on target. The German has been a constant attacking threat from the wing-back in this second half of the season for Frankfurt. The 20-year-old scored against Barcelona in the quarter-finals and against West Ham in the semi’s. He has recorded a shot on target in eight of his last 13 starts for Oliver Glasner’s side and will be an attacking threat that van Bronckhorst should not underestimate.

Ramsey & Knauff Over 0.5 shots on target and Tavernier & Borre to be carded
90/1
Odds correct as of 2022-05-17 14:30 Odds subject to change.
Opt-in
Sign-up to receive emails when new additions are made to the Opta Tool
Sign-up
By clicking opt-in you agree to our privacy policy and terms and conditions below
Opt-in
Your Details
Complete your details below to enter:
Full Name
Email
SUBMIT
Please fill in both your name and email
Opt-in
SUCCESS!
Thank you for your submission.